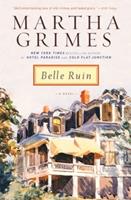 (Book #3 in the Emma Graham Series)

A waitress at her mother's decaying resort hotel, twelve-year-old Emma now has a second job as the youngest cub reporter in the history of La Porte's Conservative newspaper. But when she discovers the crumbling shell of a fabulous hotel- the once-sumptuous Belle Rouen-in the woods near her small town of Spirit Lake, Emma never imagines that the mysteries it holds will bring her one step closer to solving a forty-year-old crime-and force a new transgression...

Another beautifully written and crafted book by Martha Grimes

Published by Thriftbooks.com User , 15 years ago
Yes, Belle Ruin is a sequel. That means you have to read the books that came before it or it can be rather confusing. And, like most books, you can't skim through it and expect to get the point. Besides, Martha Grimes' prose is worth reading every word. The characters are multi-dimensional--you'll find things to like, love, and dislike in all of them. And the story is like real life; sometimes there's no neat, tidy ending. I loved the bravery of the open-ended ending in Hotel Paradise and that theme continues in Belle Ruin. If you're looking for a tidy, happily-ever-after ending, read a fairy tale. If you're looking for a beautifully written, quirky, slice-of-life mystery, read anything by Martha Grimes.

Published by Thriftbooks.com User , 15 years ago
I absolutely love this series. I don't want this book to end. I have read the previous books and thoroughly enjoyed them. Emma Graham has a lot of imagination, gumption, courage and sense of humor. I highly recommend this book after you read the previous two.

A slice-of-life coming of age tale

Published by Thriftbooks.com User , 16 years ago
Emma Graham, a precocious 12-year-old girl growing up in mid-twentieth century, small-town America has been heartily adopted by Martha Grimes fans old and new. Emma waits tables and serves the quirky and crotchety elderly inhabitants of the crumbling but sedate residence hotel owned by her mother. Emma's curiosity, unmatched by any cat or fictional adolescent sleuth, has already uncovered two separate murders in the first two books, HOTEL PARADISE and COLD FLAT JUNCTION. The notoriety from those adventures has turned Emma into a local celebrity and landed her a job as a cub reporter at the local newspaper, The Conservative. BELLE RUIN finds Emma with writer's block while she tries to write a final chapter to the series. She starts looking into past events that took place at Belle Ruin, or more properly, Belle Rouen, an exclusive lakeside resort hotel that burned to the ground during that mystery-laden period 40 years in the past. Emma's browsing through the newspaper morgue in search of story ideas discloses a mysteriously abandoned case of an unresolved infant kidnapping. Naturally, Emma, with her indefatigable nose for news, begins to dig and uncovers more buried secrets of the small town's past. Martha Grimes has populated the plot with a colorful cast of characters that includes a garage mechanic, a taxi driver, her alcoholically experimental Aunt Aurora, the blue-eyed sheriff on whom Emma has a huge crush, the hated Ree-Jane, and the mysterious disappearing girl from the previous novels. Emma's offbeat brother Will and his talented pal Mill create a locally written and produced version of "Medea," in which Emma is cast as Deux ex Machina in perhaps the most abridged version ever brought to the stage. Complete with a derivative musical score, the performances become a standing-room only hit, adding comedic relief to this slice of life coming-of-age tale. Emma's wry and often mature-for-her-age observations on human nature belie her young years, but make for joyful reading. Grimes's well-established reputation for depth and breadth of characters and plot is evident in BELLE RUIN. Whether or not we can believe that there is a 12-year-old girl, even in the halcyon years of the mid-twentieth century, who is as bright, precocious and observant as Emma is rather beside the point. The story is as full of life and spice as Emma and should be welcomed by Grimes's legion of readers. --- Reviewed by Roz Shea

Another haunting story of life in the Hotel Paradise

Published by Thriftbooks.com User , 16 years ago
I loved this book. It is another beautifully done exploration of a crime from the past coming to light with the help of Emma Graham, 12 year-old detective. I love the characters in this series- they seem so real to me. In this story, Emma decides to figure out what really happened at the Belle Rouen 20 years ago when a young child was kidnapped. The Belle was once an elegant hotel, but it is now the ruin of the title due to a fire. Grimes' writing is so evocative that I felt that I could actually see the ruins of the once-great hotel. I love the Richard Jury novels (well, most of them anyway), but I'd much rather read about Emma and company.
Copyright © 2020 Thriftbooks.com Terms of Use | Privacy Policy | Do Not Sell My Personal Information | Accessibility Statement
ThriftBooks® and the ThriftBooks® logo are registered trademarks of Thrift Books Global, LLC