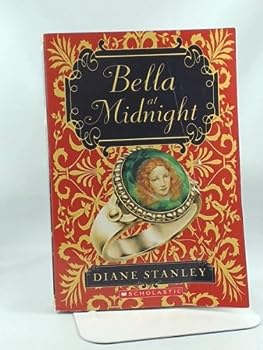 This description may be from another edition of this product. Bella has grown up thinking that she was just a simple peasant girl. But suddenly, Bella's world collapses. First, her best friend, Julian, betrays her. Then she finds out that she is, in fact,...

Published by Thriftbooks.com User , 13 years ago
My book is called, Bella at Midnight, and the author of this novel is Diane Stanley. This novel is a fairy tale full of magic, mystery, and romance. It takes place during the middle-ages.. In the beginning of this novel, Isabel, a knight's daughter and is also called Bella, is born and her mother, Catherine, dies a week after she was born. Bella's father, Sir Edward, who wanted a boy, was in such exile that he told Isabel's aunt, Aunt Maud, to take Bella away immediately, and never did want to see her ever again. He hated her so much that he didn't want her to even be in the county. Aunt Maud took her to Beatrice, a nice peasant, who took her in as her own. She was also a nursing maid for Prince Julian. Each time Julian came over, they became fonder and fonder of each other. One day when they were about fourteen or so they went to a fair. Julian was with his (royal) friends, laughing, and joking around. When Isabel saw them, she waved and called out to him. He was very embarrassed of this because she is a peasant. So he tried to hide himself, but she saw him any way. She soon realized how embarrassing this must be for him, so she left the "scene," and enjoyed the fair. Julian thought she was heartbroken, so he went back to her cottage, to apologize as soon as she came back. After a while there was a messenger who told him that the war has ended and to seal the truce, he must go and live there as a hostage, as will the other prince in Brutanna. After a few years she was told of her father, stepmother, and aunt, and then taken back to her father to see if she had resembled her mother. The time she was there, she had made friends with the cook, who taught her of cookery, and was treated very harshly by her parents and stepsisters. One of her sisters was working in court and would gossip of what is going on in the palace to her mother. One day Bella heard that the king had died and Julian's brother took the thrown. He also made some plans for a surprise attack at midnight of the day of a wedding. He would also kill Julian during the skirmish. Bella heard this and made a plan to set out and save her friend. When she finally met up with Julian, she told him every thing, and he apologized for doing what he did when he was at he fair. They both agreed to try and convince his brother not to do the attack. While Julian would do this, Bella would hide in a clearing, and wait for him to return. When Julian tried to convince his brother to not lead the attack, all he said was no. Then his brother tied Julian's hands together, and put him in the front of the army, while he was safe in the back. Soon Julian met up with an old classmate who freed him, and then Julian returned to find Bella. When he got there Bella was gone, and all the things that were there were her glass slippers, her little statue family of Beatrice, a peasant hat, and her torn dress, but if you want to know the rest, you have to go and check it out at your local library. I did not lik

Published by Thriftbooks.com User , 13 years ago
Bella at midnight is a fantasy story about a girl, Bella, who lives in Moranmoor, as a village girl. Eventually she makes friends with the prince, Julian. Than Bella uncovers an evil plot and she is the only one that can stop it. I think this book is very intriguing because it is fast paced and I could easily picture everything. This book is griping because each part is told from a different point of view. It is amazing how the author pulls together these two different stories into a unified whole. For example on page 142 and 143 Bella's Stepmother meets Bella, and the stories are than pulled together. Not only is it fast paced but I could easily picture everything in the story. Bella's house and the castle courtyard came alive in Diane Stanley's hands. The opulent stepmothers house is also fantastic. In one particular scene I felt like I was actually there in the Castle, " It's soaring ceilings and blazing torches, all decked out for a royal wedding with rich tapestries and many-colored banners and swags of greenery and flowers! And, oh, the gold dishes and goblets upon the tables and the musicians up in the gallery making their music." This book is great because it has magic, mystery, and romance--everything a fairy tale could possible be. This book reminded me of The Two Princesses of Bamarre and East because both of these books are mysterious romances. Another similar story is Once Upon a Marigold. Anybody from the age of 8-12 would like this book, but I think it holds a special appeal for girls. This fantastic story will stay in your mind long after you put it down.

Published by Thriftbooks.com User , 14 years ago
This book is so great. I could hardly put it down. I am a mom, an English Major, and an Elementary School teacher who loves a good read. This was fantastic. It would be great for an English teacher who is teaching point of view. I read it for fun because I am always looking for good books to read to my daughters and students. Read it -- You'll be glad you did!

Published by Thriftbooks.com User , 14 years ago
The other reviews have all done a great job of reviewing the plot, so I won't do it again. I'll simply add my two cents. I'm an adult who has taken to reading juvenille fiction simply because of all the graphic trash out there for being sold as adult fiction. I was happy to find I need have no such reservations about this book--it was clean. To the reviewer who said that the first chapter talking about Bella's birth was inappropriate for 10-year-olds, I disagree. It was not graphic. I think few parents would find anything offensive in it--but, of course, if there is any concern, I would urge parents to read the first chapter themselves before deciding. I know some readers might have a hard time with the fact that each chapter has a different narrator--I did not. In fact, I enjoyed getting different view points. It rounds out the story better than way. The story was not brilliant--but it was a fun read, and don't be misled thinking it's just another Cinderella story. I dislike those cheap rip-offs that require little imagination. "Bella at Midnight" much more than that!

Impossible things are happening every day

Published by Thriftbooks.com User , 15 years ago
Hello, Diane Stanley. You're looking well today. Could it be the result of a new haircut? A new shirt? Or could it be the fact that you've just written a work of fiction that is getting resounding, unending, and universal applause? I think that might be the case. You look at "Bella At Midnight" and you don't exactly know what to think. It's a nice cover and all, but is it any good? Well, there's a starred review of it in Kirkus, a starred review of it in Booklist, and a starred review of it in School Library Journal. So, yes, it is indeed good. More importantly, it does something that I would have seriously doubted possible until this time. It takes that old chestnut of a Cinderella myth, pumps it full of new life and vitality, and sends it spinning off into the ether like some kind of newfangled original tale. I still had qualms with some aspects of the storytelling, but for three-dimensional characters, magnificent plotting, and a great bit of writing through and through, "Bella At Midnight" is near impossible to beat. The child was unwanted. Her mother had died in childbirth and her father wanted nothing to do with her, so unbalanced was he by his wife's death. So it was that Isabel (nicknamed Bella) was taken from her father's home and tended to by a peasant wetnurse by the name of Beatrice who had lately tended to the prince himself. Prince Julian, the third son in his family, often comes back to visit this wetnurse of his, and over the years it becomes clear that the person he seeks most often on his visits is Bella. But it isn't until Bella is a teenager that she is told the truth about herself. The peasant family who has loved her all these years? Not her family. Without any advance notice, Bella is shipped away from everyone and everything she has ever loved to live with a father she's never known alongside a new stepmother and stepsister. Sound familiar? The story of Cinderella has been retold for a new generation and with it comes a story full of intrigue, miracles, magic, and even a pair of tiny glass slippers. It's all here. What's remarkable is how Stanley manages to incorporate all these details and never loose sight of her own original story. In this book, each chapter is told from a different person's point of view. Once in a while a singler person's P.O.V. will occur twice in a row, but usually that's out of sheer narrative necessity. What this multiple-narrative really manages to do is give almost everyone a voice. If Bella's stepmother is vicious or her stepsister proud, you learn why that might be from their separate stories. Talk about well-rounded storytelling! Not everyone gets a voice, I'll admit. We never really get inside of Bella's father's head (thankfully!) but we can see rather clearly why he acts the way he does. And any author that is able to make a privileged prince of pure heart and mind sound like someone you'd actually want to hang out with (to say nothing of perfect beautifu
Copyright © 2020 Thriftbooks.com Terms of Use | Privacy Policy | Do Not Sell My Personal Information | Accessibility Statement
ThriftBooks® and the ThriftBooks® logo are registered trademarks of Thrift Books Global, LLC