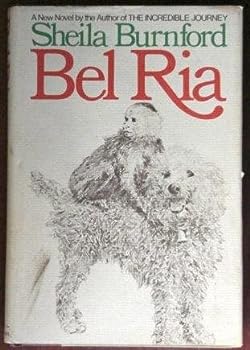 Sheila Burnford, the author of The Incredible Journey, offers the spellbinding tale of a small dog caught up in the Second World War, and of the extraordinary life-transforming attachments he forms... This description may be from another edition of this product.

A wonderful and astonishing book

Published by Thriftbooks.com User , 16 years ago
Whether you read this book and come away moved by the heartfelt simplicity of its narrative, or whether you put it down after the final page and realize you've just experienced a complex metaphor of war and innocence, BEL RIA will never leave you. Like BLACK BEAUTY, this book is not just a children's book, although children will understand it completely - maybe better than adults. Like many earlier children's classics, it's a book of the real world, genuine and not at all diluted for young audiences. BEL RIA is a classic story of a dog's journey though a baffling human world as well as a simple and profound comment on the violence of war and what it means to the most innocent; the animals. Personally, at the instant I finished the book I understood that, when it comes to war, we are all Bel Ria. Professionally, as a writer, I deeply admire the author of this book and wish she had written many more books than she did. This is a book that will come into it's own, time after time, and I can think of no better answer to a child's question, "What is war all about?"

Bel Ria is a great book to read

Published by Thriftbooks.com User , 18 years ago
Bel Ria is a great book to read if you like stories about pets, like The Incredible Journey, also written by Sheila Burnford. Bel Ria is one of the best books that she has written since the New York Times bestseller, The Incredible Journey. Bel Ria is a captivating story about a dog, Bel Ria, who goes from owner to owner all across the world. Bel Ria started out as a circus dog in a small traveling circus. When his caravan is searched by German soldiers, his owners are killed, leaving him alone, except for his friend, Louis the monkey. Together, they meet a medical officer, a British captain, and many more. They are torn apart after docking at an English port, one stays aboard the ship, and the other is taken away. The rest of the book is based off of getting them back together. I thought that this book was a fun book to read, as it involved the friendship of a monkey and a terrier. I would recommend this book to any reader, because of its ability to please all audiences. Not only is this book about a dog and a monkey, but it also goes through the hardships of war on soldiers, and those leaving war-torn countries.

Published by Thriftbooks.com User , 19 years ago
Bel Ria is a heartfelt novel, which takes you into the life a young dog's adventures during WW II. The story begins by introducing us to the soldier, Sinclair, and the dog (later named Ria and soon after Bel) in the depths of France. The dog belongs to a traveling caravan where he performs tricks for show and entertainment. Soon the dog and Sinclair's paths cross whereas their futures are welded into one. The caravan's owner dies when a German airplane bombs the caravan. The dog and a monkey survive the ordeal and soon enough find Sinclair and attach themselves to him. The dog has lost communication with people because as a performing dog the only way he knew to communicate was with the hand signals that his former master gave. Throughout his journey, Bel Ria tries to communicate with the outside world. He is far more intelligent than other animals and every person he meets, McLean, Sinclair, Alice, he changes in a considerable way. He is marveled by many but never fully understood. This book takes you through his life and to his final performance.the first chapter is a little slow but when i got past that i was hooked. 5 stars!
Trustpilot
Copyright © 2022 Thriftbooks.com Terms of Use | Privacy Policy | Do Not Sell My Personal Information | Cookie Preferences | Accessibility Statement
ThriftBooks® and the ThriftBooks® logo are registered trademarks of Thrift Books Global, LLC