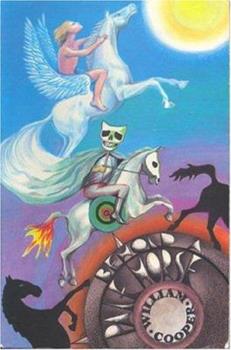 Bill Cooper, former United States Naval Intelligence Briefing Team member, reveals information that remains hidden from the public eye. This information has been kept in topsecret government files since the 1940s. His audiences hear the truth unfold as he writes about the assassination of John F. Kennedy, the war on drugs, the secret government, and UFOs.Bill is a lucid, rational, and powerful speaker whose intent is to inform and to empower his audience...

I feel everyone needs to read this book

Published by Sarah , 20 hours ago
This book is very well written of what the secret government has been doing to depopulate with the quiet war in America and transition to the new world order. This book had me a bit frightened at times with all the things the government has changed without our knowledge to create a slave nation of the Elite and then the rest of us. Everyone must read this book- it is very insightful.

Published by thorsday , 10 days ago
Juts bought this before reading them and apparently this isn't the right edition.

Published by Pat G , 5 months ago
This book was so far ahead of its time. Makes you question everything and thus look at the world through a new lense. RIP

Published by Jamie , 7 months ago
We used to have the original print of this book. We bought it while cooper was still with us. My husband was afraid of having it in the house during an episode and got rid of it via the fireplace.... That is how powerful the information in this book is. So it doesn't surprise me that information was taken out of this revised version. It's upsetting that this is being advertised as the original release date. That needs to be changed. It's not right. Otherwise people need to read this book to open their eyes to the powerful and corrupt.

Published by Ken , 10 months ago
This book has been redacted, +\- 100 pages. I currently have the original, ordered this for a friend. Not worth your time. Locate the original book, if it's available.

This book is spot on. It's become extraordinarily evident.

Published by Chico Mendes , 1 year ago
This is a must read.

Published by Claire , 1 year ago
Just like ALL the other reviews, I received the revised version rather than the portrayed 1991 edition. I am so upset!!

Published by Swindled , 1 year ago
Ordered this book under the belief that I was going to get the 1991 EDITION....Instead got the edited, revised trash edition. Extremely disappointed.

This Is Not The Original Version!!

Published by Scumbag Alert , 1 year ago
This is the 2019 edited, chapters removed, typos version. Not worth the paper its printed on. And these people are scamming you it is NOT the 1991 version. Fraud

1991 edition is most certainly unavailable

Published by BookGuy , 2 years ago
The original version of this title from 1991 is out of print and per the publisher, there are no plans to reprint in the original format. The rerelease is edited (a chapter has been removed) and cover art is not the same. While the book is popular, the only version available is NOT the one pictured. Light Technology Publishing is the publisher. Just a heads up.

Published by KTrap , 2 years ago
Disappointed, the 2019 is missing important info. The description says is the 1991 version, but like others, I received the 2019 version.

Published by KLud , 2 years ago
Description indicated that this was the 1991, but it's not. It's the 2019 version that has been revised. When I contacted customer service, I was going to be forced to pay shipping to get a refund for their mistake. So just keep that in mind please if you're looking for an original version.

Published by Kris C , 2 years ago
I'm a bit disappointed because I ordered this based on the description that this was the 1991 version, of over 500 pages. It is not. I received a revised 2019 copy, at 435 pages. I'm not sure how I could have checked it further to verify which copy I was receiving, I trusted the description. So just be aware, guys!

Published by Anonymous , 2 years ago
I've looked at several book store websites and this one is the closest to the original book with the amount of pages. So far this is the only version of this book that has more than 500 pages and the closest to the original 546 pages. Most of the versions of this book are revised and missing chapters and pages in general. I'm not sure if this is the true version or not but I would like to know before I buy.

Published by Thriftbooks.com User , 17 years ago
Whatever criticisms can be levelled against this book, I believe it to be Bill's honest attempt to reveal the Truth as he knew it, at that time. For those who are new to Conspiracy Theory, this is a mine of information, and for those who are more knowledgable, it still stands as a classic of the genre, and a very courageous book. Bill's 'convenient' death in a questionable shootout came as no surprise to most Conspiracy buffs, as the guy threw down the gauntlet in a big way. He was fearless. One fascinating addition to his Kennedy assassination info came in his video, Kennedy: The Sacrificed King, in which he examines the Zapruder film of Kennedy being hit, and by virtual frame advancing, the clip appears to show JFK's driver, William Greer, shooting JFK over his shoulder, delivering the second and probably ultimately fatal shot. As for some of his Alien info, I know military intelligence hierarchies, and Bill was only operating at a relatively low level in his Naval Intel role (whatever his supposed Clearance), so he never had access to the big picture, and he himself was vulnerable to Disinformation, as he suspected himself. What he conveys is a mixture of Truth and DI. On a technical note, the book is not a polished, edited finished product, and many of his strategies such as continuous capitalization for emphasis make it hard to read at times, but the content itself makes it well worth the effort to press on. Like so many of his brothers and sisters, the guy served his Country with honor in Vietnam. There is much to respect about the man.
Trustpilot
Copyright © 2022 Thriftbooks.com Terms of Use | Privacy Policy | Do Not Sell My Personal Information | Cookie Preferences | Accessibility Statement
ThriftBooks® and the ThriftBooks® logo are registered trademarks of Thrift Books Global, LLC