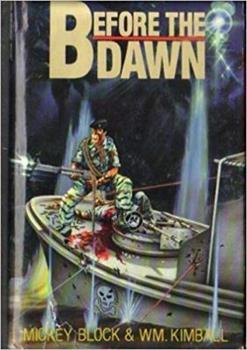 Mickey Block was a rowdy teenager when he joined the Navy--and began the journey that would take him from being a SEAL commando to deadly top-secret riverboat missions in Vietnam. Riveting and... This description may be from another edition of this product.

The Physical and Emotional Sacrifice of a Vietnam Veteran

Published by Thriftbooks.com User , 13 years ago
I have read thousands of memoirs and testimonies of sailors, soldiers, prisoners of war and aviators that both participated and were hurt in the horrors of America's war in Vietnam, but Mickey Block's "Before the Dawn" is one of the most saddest accounts I have ever encountered. 365 Days Block traces the painful odyssey he made through the horrors of of coming very close to dying in Vietnam and it's torturous aftermath. This book is not fiction. It is a true memoir of how Mickey Block, an elite Navy Commando, was involved in covert combat missions and was both emotionally and physically shattered by the bestial insanity of the conflict in Southeast Asia. Man of the River: Memoir of a Brown Water Sailor in Vietnam, 1968-1969 The reader will encounter the pathetic and sorrowful ordeal of countless adolescent men who came of age in Vietnam only to return to the world to face the sobering reality of a youthful innocence lost before it's time. Better Him Than Me However, for all of "Before The Dawn's" graphic, brutal frankness, it renders a story that transcends the tragedies and traumas of that painful period in American history. It is very relevant, in light of what is occurring currently in Iraq, as it offers hope and healing for those who bear the scars of the Vietnam War and for those with P.T.S.D., whose scars don't show War Trauma: Lessons Unlearned, From Vietnam to Iraq Mickey Block wrote this book in 1988, twenty years after being critically wounded by friendly fire while serving with the U.S. Special Forces in 1968 and 1969. His coauthor, William Kimball, was highly qualified to assist Block in writing this scathing memoir, as he himself had firsthand experiences as a mortarman with the 1st Air Cavalry Division and had his own personal ordeal when he was medically evacuated from Vietnam in 1968. Valor This book is not for the faint hearted. Block's description of his near death experience, the vivid death, torture, and other atrocities of war he witnessed and became calloused to are graphically described and only for the reader with a cast iron stomach. Regret to Inform You: Experiences of Families Who Lost a Family Member in Vietnam Block paints a sickening picture of torture and murder perpetuated by the Viet Cong and North Vietnamese to intimidate the country folk into cooperating with the Communist cause. A Vietcong Memoir: An Inside Account of the Vietnam War and Its Aftermath He also describes his ordeal of parental abuse, losing his girlfriend from the toll of war, his grief of almost being killed at the hands of his own men, and his battle with post traumatic stress syndrome, and this country's ungrateful reception to a returning and severely wounded veteran. VERY CRAZY, G. I. Strange but True Stories of the Vietnam War This book will give you a glimpse of the Vietnam War rarely seen and is not to be missed! This is an incredible story!

Published by Thriftbooks.com User , 22 years ago
While it is probably true that the author is not an offical Navy Seal I found the book to be an excellent look into the life of Vietnam veterans. I have met one of the people mentioned in the book; Dave Roever. He was definetly injured as listed in the book. I would recommend this book to anyone with an interest in the war and particularly the effects of war.
Trustpilot
Copyright © 2022 Thriftbooks.com Terms of Use | Privacy Policy | Do Not Sell or Share My Personal Information | Accessibility Statement
ThriftBooks® and the ThriftBooks® logo are registered trademarks of Thrift Books Global, LLC