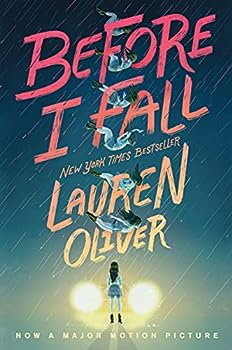 This description may be from another edition of this product. With this stunning debut novel, New York Times bestselling author Lauren Oliver emerged as one of today's foremost authors of young adult fiction. Like Gayle Forman's If I Stay and Nicola Yoon's...

Published by Dakota , 1 year ago
This is the best book I've read in a long time. Wanted to read it for years and was finally able to buy it. I could not put it down and finished it in a couple of days

Published by Thriftbooks.com User , 4 years ago
First of all, let me say this book is very annoying, but in a good way. Samantha Kingston lives the same day over and over and over for seven days. Who wouldn't be annoyed? But she pushes on. She learns more about life and happiness and friendship than any of us ever will. This book is a page-turner, and you'll try to read it all at once. Though it does get repetitive, I stayed interested. Life is repetitive. This book deserves five stars.

Published by Thriftbooks.com User , 11 years ago
It's hard to believe that this is Lauren Oliver's debut novel, that's how excellent this book is. This 470-page novel is smoothly written, wonderfully developed, and never ever dull, enthralling all the way through. From the first page, Lauren Oliver's assured writing sucks you in and never once lets go. The transformation from writer to character is effortless: Samantha and all her friends are pitch-perfect teenagers, without any of the try-too-hard fakeness often exhibited by YA mean girls. Instead, every character has their good and bad points, and even though these girls may not necessarily be nice, we still are interested in them, and care for them, because they are just like us, or our neighbor, or our friend, or that girl in our class. Each time Sam relives her last day, she gets to know different people differently, learns something new about herself. It says a LOT about Lauren's writing skill that the book never gets dull. The pages fly by in smooth reading, and Sam's development from mean girl to, well, not-so-mean girl is so subtle that you'll find yourself falling for her and/or cheering for her even as she messes up or reveals unlikable aspects about her character. Even if BEFORE I FALL is not action-packed, it's full of such careful observations about teenage nature and our ability to change that it's literary gold: you'll treasure the first time you read through it, and if you're anything like me, you'll want to pick it up and read it again immediately after you finish it. It's not often that a debut novelist instantly becomes one of my favorite authors (I usually give it two books before I call favorites), but Lauren Oliver's incredible novel has made me a fan of hers for life. I'll read anything she writes from now on, even if she chooses to write about zombie/werewolf mutants--because she has the power to make fiction real.

One of the best novels I've read lately

Published by Thriftbooks.com User , 11 years ago
This book is extremely powerful, an emotional roller-coaster that will take your breath away. And yet it's not a dark book. The plot kept twisting and untwisting, flowing beautifully, leaving you engaged, always interested, wishing to devour the book in a few seconds. The ending left me speechless, with a vague sense that I should fix my life just like Sam fixed hers. A sudden realization of how we take things for granted, when we never truly know how much time we have left, and we don't realize how one little decision affects everything around us. I must admit that Lauren's writing blew me away. She has the perfect writing recipe for a YA book; just enough humor, add an utterly powerful message, some edgy-sarcastic dialog, the right amount of description with delicious imagery, incorporating easy-to-relate-to back-stories AND, of course, the not-popular yet not geeky adorable caring yummy boy. Oh, Kent. The characters were incredible. Specially Lindsey's and Kent's. This is definitely the best debut novel I've read since Graceling in 2008. I am really excited to read more 2010 debuts! If they're half as good as this one, they're pretty much amazing. This is by far THE book you must not miss this year. In fact, if you haven't read it yet, you're missing out.

Published by Thriftbooks.com User , 11 years ago
Lauren Oliver has twisted threads of Sam's novel from Groundhog Day and Mean Girls with just a touch of morbidity. I couldn't stop reading though at times I wanted too. Sam is one of the popular girls (yes this story starts out so typical) the leader of their 'pack' is Lindsay followed by Elody and Ally. These girls are typical, they are shallow yet have layers that belie the shallow personas they put on. Sam realizes after dying in a car crash that actions lead to more actions that lead to reactions and the web keeps spreading out. After living a typical day, school, party... her and her BFFs are in a car crash. Sam realizes she's dead yet stuck in this form of limbo when she wakes up to the same day again and again. I thought at first that re-reading the same day with the same details would be boring, but every day Sam realizes more about her actions and words. Everyday she learns more about herself, her best friends, and the souls they torment. What will it take for her to be released from this purgatory? The writing was easy to read and sounded like a Senior in high school. With only a little of the forced 'lingo', you know beeyatches and all. As Sam relives her day over and over I found myself thinking back to moments in High School, moments that were important to me and ones that could have been to others. How far do your actions and words reach? I don't think anyone really comprehends that. The ending of the book.... ah the ending.... I'm honestly not sure if it's terrible or absolutely perfect. And isn't that just like life.

If you knew THEN what you know NOW- what would you do?

Published by Thriftbooks.com User , 11 years ago
Sam is the kind of girl we can all hate. Popular, snotty, superior. In life, you could have pointed out her bad behavoir and she probably would have laughed in your face, or honestly, not cared at all. But, in death she is forced to take a good, long look at every choice she has made in her relatively short lifetime. We get to know Sam and her friends at the beginning of the story, leading up to a crash that takes Sam's life. You have to be patient as you are introduced to them because they are not likeable at all. Just when you think you've had enough of them, they are in a deadly crash. That's not the end of the story, though, only the beginning. Sam goes into a sort of sleep following the accident and awakens to relive her last day. Will changing something along the way lead to a different result? She tries, and tries again, and again. In fact she gets numerous attempts to "perfect" her last day, hoping she can make the most of her life...and her death if can't undo the accident. This is not your typical tale of redeeming yourself. It's not so easy to make the changes that Sam needs to make to change fate. She doesn't simply do something new each time she gets a new day. Her first attempts are vastly different with vastly different results. It's not until she puts all the finest pieces together that she thinks she has the best solution. Life is unpredictable and so is death for Sam. Watching this aggravating girl realize how wrong she has been is satisfying. Seeing her struggle to become a better person with only one day is fascinating. Wondering how (and if) she is going to succeed makes you not want to put this book down. Great read! Note to parents: This book does contain a lot of references to drinking, drugs and sex, but nothing graphic.

Published by Thriftbooks.com User , 11 years ago
Friday, February 12th should be just another average day for popular, beautiful Samantha Kingston. But it's far from it--her ride home after a late-night party ends in a car accident, only when Sam wakes up, it's Friday, February 12th again. Forced to re-live the last day of her life seven times, Sam struggles to understand the meaning behind these experiences and the significance in her own life and actions. Because only when she can get her last day exactly right will she ever be able to take the next step. With keen insights and startling candidness, Lauren Oliver's debut novel is a frank, if not at times brutal look at high school social circles and the careless cruelties and bullying that occurs on a daily basis. Sam is one of the mean girls, and she shrugs off her biting words and actions as something that just happens, collateral damage of living through high school. But through every complex and carefully plotted event, Oliver peels back the layers of Sam's life and teaches us all that every little deed has a consequence, and no act goes unnoticed. Though Sam is by no means a likable character at the beginning of the novel, as her character is revealed and she learns a thing or two about the things she has done in her life and the person she has become, she morphs into a true, selfless, and caring heroine, despite her many flaws. The story line is addicting and suspenseful. and as each "day" passes and Sam begins to get things right, the question that has been looming in the back of your mind since the end of the first chapter--What will happen to Sam?--becomes more and more urgent. Oliver is skillful at wielding suspense and heartbreak, making you think hard about the value of your own life and actions. Before I Fall is a haunting and beautiful book. It will float around at the back of your mind long after you've read it.
Copyright © 2020 Thriftbooks.com Terms of Use | Privacy Policy | Do Not Sell My Personal Information | Accessibility Statement
ThriftBooks® and the ThriftBooks® logo are registered trademarks of Thrift Books Global, LLC