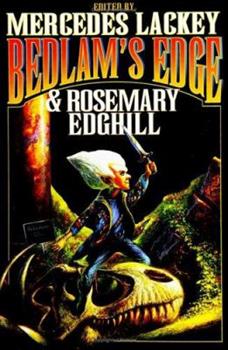 (Book #8 in the Bedlam Bard Series)

Mercedes Lackey and Rosemary Edghill are the biggest names in the urban fantasy subgenre - where elves, banshees, trolls, and even stranger creatures walk modem city streets, their presence, and even their existence unsuspected by the human inhabitants. Now these two present a volume of all new urban fantasy, with a stellar line up of the best new fantasy writers, such as Roberta Gellis, Dave Freer and Eric Flint, Diana Paxson, and more-including...

A top pick for fantasy readers.

Published by Thriftbooks.com User , 14 years ago
Mercedes Lackey and Rosemary Edghill edit BEDLAM'S EDGE, a top pick for fantasy readers. It's a volume of new urban fantasy containing works by the best modern writers of the genre, from Eric Flint to Diana Paxson, and presents a series of adventures, from a desperate search for a bottle in which a powerful and dangerous djinn is trapped to an alternate fantasy history in which the faeries become involved in America's Civil War. Powerful characterization and to-quality writing make this a distinguished collection which stands out from the crowd of fantasy anthologies on the market.

Published by Thriftbooks.com User , 16 years ago
I'm new to this series, but I am familiar with most of the writers featured in Bedlams Edge. I'll buy and read anything that Dave Freer writes from Pyramid Scheme on down to his grocery list, (that is if Mr. Freer wrote it). Mr. Freer's stories are a delightful half bubble off center; far enough off center for the story to be enjoyable and close enough on center for the story to be believable. Mr. Freer is the first author that I'd buy sight unseen. In Red Fiddler, Mr Freer leads the reader along effortlessly as the story unfolds as a seamless whole. A very enjoyable read! Mr. Flint is another author I buy sight unseen. Mr. Flint caught my attention from the moment I first picked up his "Philosophical Strangler." His inclusion in Red Fiddler was very welcome extra. Barb and Michael Caffery's "Bright as Diamonds" delighted me very much. It was as delicately written as the necklace that the heroine wore in their story. I have added Barb and Michael Caffery to my list of buy sight unseen authors. Ms. Lackey and Ms. Edghill are added to my "Must Buy List" also. I haven't mentioned the rest of the authors out of time restraints. All the stories in Bedlams Edge are worth purchase on their own merits, the reader lucks out in that they're all in one place. Kudos to Ms. Lackey and Ms. Edghill for making this book happen and letting other writers play in their universe. K. P. Caudell

A compilation of neat stories, all gems

Published by Thriftbooks.com User , 16 years ago
Since I like Misty Lackey and Rosemary Edghill enough to buy them in hardcover, I'll focus on the other stories. "Bright As Diamonds" by Barb and Michael Caffrey reminds me most of the Lackey/Edghill collaborations, as their style and story reflect that "universe" faithfully. I appreciated their use of the Brisingamen and elements of Scandinavian fantasy -- they incorporated lesser-known mythology into the Lackey/Edghill universe in a smooth manner. "Bottle of Djinn" was also amusing, and a modern version of the djinn versus humans. In "Red Fiddler", Dave Freer brings his updated Fear Dearg, the Irish "red man" transplanted to Africa, to us in a thoroughly enjoyable story. True to form, Dave finds some way to bring the forgotten tricksters of our past into a modern world, while keeping their low and vile humor wickedly certain. "All That Jazz" by Jenn Saint-John..all I can say is, "That idiot, Norenlod." "Six-Shooter" by Ellen Guon and "The Waters and the Wild" by Misty Lackey were both compelling looks at more disturbing topics. Suicide, in "Six-Shooter" is.."encouraged" by evil beings who then consume the souls of the hapless suicides. Some of the souls fight back for as long as they can. "Waters" begins with a man explaining how someone helped him through a difficult adolescence, and although a sniper's bullet takes him out of this life, he finds that person again. All of the stories were written by seasoned professionals, even if some of the authors are not widely known to the discerning reader. The skill with which they write is clearly evident, and I look forward to future collaborations in this universe, and perhaps even solo endeavors by these authors (one can only hope!).

Sliding Down the Razor Blade of Life

Published by Thriftbooks.com User , 16 years ago
Ever wondered what was just around the corner? Felt like you were being watched, but when you turned around, nobody was there? Maybe you were wrong. Maybe there is something there, behind the flats and props of ordinary reality. Mercedes Lackey, Ellen Guon, and Rosemary Edghill created a look behind the scenes in their Bedlam's Bard series. What would happen if elves continued to exist in the present day? What would happen if they came to America with the colonists? And what would they be doing? In Bedlam's Edge, they've opened their universe to other writers, including talented newcomers Barb and Michael Caffrey (who sadly, passed away suddenly and too young), who share their own takes on the world of Urban Elves. Dave Freer and Eric Flint, Mercedes Lackey's co-authors in the Heirs of Alexandria series (if you haven't read the series, go immediately and buy all of them, including A Mankind Witch, the latest.), Roberta Gellis, Rosemary Edghill, India Edghill, and Mercedes Lackey herself all contributed to this excellent collection of short stories. Do you have to have read all the other books in the series to enjoy this one? Heck, no! In fact, it stands alone better than most anthologies do. This is a terrific collection. Every story is a jewel. Walt Boyes The Bananaslug. at Baen's Bar
Trustpilot
Copyright © 2022 Thriftbooks.com Terms of Use | Privacy Policy | Do Not Sell My Personal Information | Accessibility Statement
ThriftBooks® and the ThriftBooks® logo are registered trademarks of Thrift Books Global, LLC