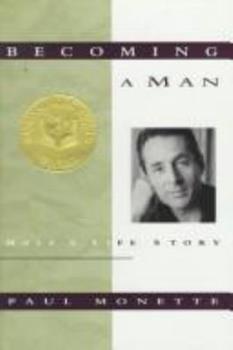 Becoming a Man: Half a Life Story

A child of the 1950s from a small New England town, "perfect Paul" earns straight A's and shines in social and literary pursuits, all the while keeping a secret -- from himself and the rest of the world. Struggling to be, or at least to imitate, a straight man, through Ivy League halls of privilege and bohemian travels abroad, loveless intimacy and unrequited passion, Paul Monette was haunted, and finally saved, by a dream of "the thing I'd never...

poignant enough to alter the course of my life

Published by Thriftbooks.com User , 22 years ago
I'm a straight girl. I read this book when I was fifteen years old. Paul Monette's story was the most moving, heart-wrenching I have ever read, and his honesty, humanity, and incredible gift of writing made it all the more powerful. Being straight and young and female posed no barier to my empathy for him, or his impact on me. Since reading Becoming a Man, I have dedicated myself to gay rights; I have composed two articles on the topic of homophobia, started a gay-straight alliance at my high school, which is dedicated to the memory of Paul Monette, and become close friends with several gay and lesbian students. Monette's words and stories seeped into me so deeply that they're a part of me, a part of what I do, a part of the way I think and act. I consider him the most influential person to me besides my immediate family and best friends. I ache that I can never meet him and tell him how heroic and nobel I think he was. He is my favorite writer, and my personal hero for combatting oppression, ignorance, disease, and the suffocating trap of the closet, and for refusing to go quietly into the night. I recommend this book to anyone, straight, gay, closeted, young, or dying. No one will read it all the way through without being changed.

Gone But Not Forgotten

Published by Thriftbooks.com User , 22 years ago
Why would a straight woman want to read the memoirs of a gay man, the late Paul Monette who died of AIDS in the '90s? Because all you have to be is human to appreciate the passion and conviction this man brought to his life as he neared the end of it. Monette grew up in the Ivy League albeit deeply closeted. When he finally "came out", it was to discover the love of his life, Roger Horowitz. They spent happy years together until Roger first got AIDS and then Paul got it. Paul took care of Roger while he died from AIDS. His love for Roger is recounted in BORROWED TIME, AN AIDS MEMOIR, also by Monette, which I view as the prequel to this book. With this book, Monette went back to the time before Roger and his coming to terms with the fact that he was a gay man. He spent most of his youth in total denial. Monette was a good writer before he and his longtime companion contracted AIDS but AIDS transformed him and his work to much higher levels of art. This book deservedly won the National Book Award and many people felt, including me, that BORROWED TIME should have won it as well some years earlier.

Finding Yourself as Paul Monette Finds Himself

Published by Thriftbooks.com User , 22 years ago
When I discovered this On Becoming A Man, I had just ended a relationship. I was very alone in a much lonelier environment. Reading Paul Monette's journey into becoming the man he was sitting there writing this work was tremendously eye opening to me. I bought several copies of this book and gave it to friends. I am still looking for what he described as his "laughing man." At almost the end of the book - he describes how he meet his then love of his life. Those words he wrote describing his feelings were so true. This is one of my favorite if not my most favorite gay work. I identify with him in far too many ways. I am a teacher as he was for a point in his life. He is a writer and I enjoy reading and writing. However - what you will see in this work is the journey a man traveled from his childhood until his adulthood. This is more than just a journey of learning to accept your sexuality. It is far more than that. Accepting your sexuality is just the trimming. He learned to accept himself - himself beyond the homosexual - himself the human being. He came to the realization that he could be a homosexual, a man, a good person, a caring and supportive lover and an outstanding person. All of that and a bag of chips. Keep the tissues handy when you read. And also keep a pen to underline some of his wonderful lines. Give this book to someone you love or should learn to love: first give it to yourself and then give it to someone else. huwv@aol.com

Published by Thriftbooks.com User , 23 years ago
When I started this book, I was sort of turned off by all the intellectual-allusions but then I was drawn back. I read the rest in a weekend. Effective & honest--essential for gay & straight alike.

Published by Thriftbooks.com User , 23 years ago
Like a previous reader, I read an older version of Monette's 'Borrowed Time' and hoped I might one day meet this wonderful man; it wasn't until I saw nfalzone's review here before reading 'Becoming a Man' that I realised Monette has since died. I also cried; Paul Monette really touched something in me and I can only hope that many, many more people will read this book, though I fear he is somewhat preaching to the converted. For those of us with gay family members it is a real eye opener, though I don't know that many parents would be able to handle this book. His story will drag you through so many emotions, not least anger; may Paul Monette rest in peace and may he be an example to us all to speak out, with open hearts and minds.
Trustpilot
Copyright © 2022 Thriftbooks.com Terms of Use | Privacy Policy | Do Not Sell My Personal Information | Cookie Preferences | Accessibility Statement
ThriftBooks® and the ThriftBooks® logo are registered trademarks of Thrift Books Global, LLC