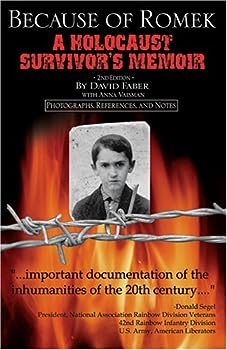 Because of Romek: A Holocaust Survivor's Memoir

This is a nonfiction, autobiographical narrative from the point of view of a teenager during the Holocaust of World War II - the riveting, true story of a young boy's survival in the face of Nazi... This description may be from another edition of this product.

Edge of your seat book

Published by Thriftbooks.com User , 4 years ago
Masterfully detailed written with raw emotions and edge of your seat real life accounts

Published by Thriftbooks.com User , 15 years ago
This is the real story of a young man who was forced to endure the very worst that mankind can inflict. As an adolescent his "high school" was a series of the worst of the Nazi concentration camps in WWII. I have personally hosted Mr. Faber as a visiting speaker in the Sacramento area, and am amazed that he survived those years of ordeal and then has become the warm and productive human being that he is today (at 84 or so years old now).

Published by Thriftbooks.com User , 15 years ago
I've read many books about the Holocaust, but none have given me such a detailed and, may I say, gruesome picture of the atrocities the Germans committed against the Jews. At some points there was a surprising lack of emotion, but perhaps this slightly distant style brings the facts of the situation to the forefront, making the book more valuable on the intellectual side. Be prepared, this book contains very disturbing material; perhaps the most disturbing part is that it truly happened.....

And you thought you had it rough...

Published by Thriftbooks.com User , 21 years ago
My girlfriend and I had the good fortune of meeting Mr. Faber at a recent book signing. Seconds after introducing himself, he is ready to pull up his shirt sleeve to show you a grim reminder of his past. His arm still bears the numbers, forcibly tattooed on him by the Nazi regime. He then pulls open his book, lovingly pointing to his mother and sisters. With a soft break in his voice, he then describes the moment he found them lifeless, piled on top of one another. We bought several copies... and have come back to purchase more.The book does not disappoint, written in a narrative format that is easy to follow and gripping to read. His work leads you down the path of brutal history, following his family as they are forced into slave labor, rounded up into Ghettos, and then ritualistically hunted by the Nazis. He makes a pact with his mother to survive the horrors, and through it all, he somehow does. Reading the book, you realize that he had a higher purpose in life, educating future generations about the atrocities that no man or woman should have to endure. After meeting the man and understanding his past, one can only thank God Mr. Faber lived to tell his story. It will change you forever.

A promise to survive

Published by Thriftbooks.com User , 22 years ago
Young David Faber survived the horrors of the Holocaust because of Romek and because of a vow he made. Romek was his older brother, a Resister whom David watched tortured and murdered by the Nazis. That was at the beginning of the persecution of the Jews. The vow David made to his mother was simply that he would live. The true experiences related in this memoir left this reader first breathless, then chilled, then nearly numb. To say more would lessen the impact for the next reader. Just order it and read it now! The story of David's survival in the Ghetto, in flight and in hiding, in the Partisan band, and in the concentration camp is simply-written but powerful. These days Mr. Faber is a sought-after speaker at San Diego middle-schools and high-schools. Students rarely fail to be moved by the courage and endurance of a 15-year-old child of the Holocaust. This book really should be required reading, alongside Anne Frank's "Diary of a Young Girl" and Inna Konstantinova's journal in "Defending Leningrad".

Published by Thriftbooks.com User , 23 years ago
I have read Mr. David Faber's book, "Because of Romek" several times, and each time I am moved to choking tears. He writes in a way that takes the reader there to his experiences during the Holocaust. When I finish the book I am always left with the same feeling: deep concern that the last of the survivors are now dying out with age, and as a result this horrific event called the Holocaust will fade into unrecognized history, ceasing to be a reminder of how cruel we humans can become indeed if not careful to check our values on a continuous basis. "Because of Romek" is the ultimate example of how easily it is to be led astray by others (Germans allowing themselves to swayed to honour Hitler's own insane beliefs without considering about what they were really doing). David Faber is a man I personally admire beyond words; he survived on determination alone, driven by a promise he made to his mother that kept him alive through the entire war. He witnesses events most of us only imagine or read about. He shares with us what really happened then. If I were a schoolteacher I would require every one of my students to read this book and discuss at length the importance of it and why it is important for us to remember the Holocaust. - Tony Flach
Trustpilot
Copyright © 2022 Thriftbooks.com Terms of Use | Privacy Policy | Do Not Sell or Share My Personal Information | Accessibility Statement
ThriftBooks® and the ThriftBooks® logo are registered trademarks of Thrift Books Global, LLC