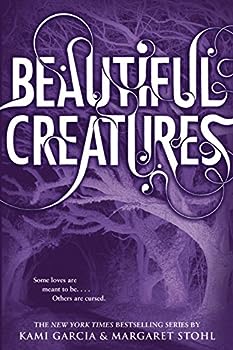 (Book #1 in the Beautiful Creatures Series)

by Kami Garcia and Margaret Stohl

This description may be from another edition of this product. Lena Duchannes is unlike anyone the small Southern town of Gatlin has ever seen, and she's struggling to conceal her power, and a curse that has haunted her family for generations. But even within the...

Published by kendrap1399 , 12 days ago
I read this as a teen and am now re-reading the series as a young adult and still love the characters and stories. It is from a male-perspective, which is unique in these sorts of stories.

Published by Tahlil , 1 year ago
So I haven’t read the book yet but it arrived in a very very good shape

Published by Ash , 2 years ago
I love the way this book is written. It suckes you in from the first page and keeps you hooked until the last page. The characters are rounded and well developed.

Published by Thriftbooks.com User , 12 years ago
Lena and Ethan are in love, but they're also afraid, because Lena is a member of a family who is cursed. At her 16th birthday, Lena will mature as a 'Caster' and she will be claimed by the Light or the Dark. If she becomes a Dark caster, she will lose the ability to love and will dedicate her life and her powers to evil. Until her birthday, nobody knows which way she will 'turn', and her family can only love her, guard her, and hope for the best. The story of these starcrossed lovers is an echo of the incident which caused the curse, in which a caster used dark magic in a vain attempt to save the life of the man she loved. This book is classified as a YA entry, though I think the story has things to appeal to all ages. It is YA only in the sense that the main protagonists are teens. It's a chunky book, over 600 pages, but I read it very fast because the story was so gripping and so lovely. As an adult fantasy fan, I loved this book. By all means give it a look, I spent some happy hours in these pages and with winter coming, it's so nice to find a story that has so much warmth.

Published by Thriftbooks.com User , 12 years ago
I have never really liked romance plots, and most of the time I despise YA romance. I don't think I will ever much like either, and my track record will most likely show cynical remarks for everything from the movie Titanic to Twilight to Pride and Prejudice and especially Romeo and Juliet. But Beautiful Creatures is an anomaly on that review record. Because I didn't just enjoy Beautiful Creatures. I loved it. And not just because there's magic in it. First I loved the return to 1990's modern fantasy! For anyone who doesn't know what that amounts to: witches. Not ones with a special, hidden school (under no circumstances, however, am I complaining about Harry Potter) but the ones who hide in plain sight. Sabrina the Teen Age Witch. Disney Channel's Halloween movies. TNT's Charmed. Casper the Ghost. Having grown up with books and TV shows such as those, the return to witches and curses and dark charmed objects is more than welcome. But even if you won't be on the nostalgia train with me, the witch element should be welcome to anyone even remotely tired of faeries/fairies, angels, demons, werewolves, and (dare I say it?) vampires. Second I loved the incorporation of 90s fantasy with 21st century style--something I'm sure fans of the current YA will enjoy. What I mean is a first person story that moves quickly. This novel moves quick, sucking the reader right along. Yet, even when incorporating the 21st century style, Beautiful Creatures still manages to be different: it's first person, through the guy's POV. Kinda neat. The third thing I loved is the length of this novel. Most YA these days is rushed, even if it is long, and it doesn't seem properly developed. Rushed, in musical terms, like things were cut out. But Beautiful Creatures has substance to it, but every scene still matters, and for once I wasn't saying, "I wish it had more to it." In other words, the novel feels complete, and it wasn't just a three hour read. And the fourth (and grudgingly most important)thing I loved about Beautiful Creatures was the love story, which was beautifully done. The authors made fabulous choices. For one thing, it's first person, through the dude's POV, which cuts out all the fawning and whining and obsessiveness of the female's POV. For another thing, little time is wasted on the crush-developing stages. It just happens, rather than dragging the reader through months of "Does she like me? Does she hate me? Was that a smile at me?" Most importantly in that important point is that Ethan and Lena's relationship IS special, where other YA relationships just claim to be special and "true." I'm not calling it true love or anything, just that their relationship feels genuine. And that the fantasy elements (with the witches and all) are integral to it all. In other words, rather than fantasy elements being slapped on to make it "cool," they serve a legitimate purpose in the story, and they make Ethan and Lena's relationship stronger and better. In the end, I
Copyright © 2020 Thriftbooks.com Terms of Use | Privacy Policy | Do Not Sell My Personal Information | Accessibility Statement
ThriftBooks® and the ThriftBooks® logo are registered trademarks of Thrift Books Global, LLC