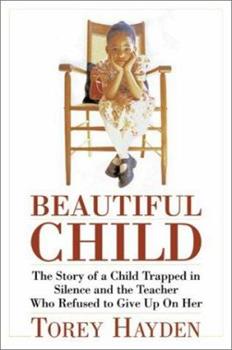 From the bestselling author of One Child comes this amazing, true story of a mute and withdrawn seven--year--old girl and the special education teacher determined never to abandon a child in need. Seven-year-old Venus Fox never spoke, never listened, never even acknowledged the presence of another human being in the room with her. Yet an accidental playground "bump" would release a rage frightening to behold. The school year that followed would be...

Poignant account of a teacher's work with troubled children.

Published by Thriftbooks.com User , 20 years ago
Torey Hayden's new book, "Beautiful Child," is a moving account of Ms. Hayden's year teaching a class of children with serious emotional and physical problems. Shane and Zane are six-year-olds with fetal alcohol syndrome. Nine-year-old Billy is hyperactive and aggressive. Eight-year-old Jesse twitches and barks as a result of his Tourette's syndrome. The title refers to seven-year-old Venus Fox, a deeply withdrawn child from a dysfunctional family who is completely unresponsive to external stimuli.Hayden vividly recounts the outrageous and often hilarious events that occur in her classroom in minute detail. We feel her frustration and elation as she describes her efforts to transform an angry and anti-social group of students into a cohesive and functioning class. Hayden is as unembarrassed about discussing her setbacks as she is pleased to discuss her successes. The author's honesty and realism give "Beautiful Child" an extra dimension that touches the heart.The story of Venus Fox reduced me to tears. Hayden's painstaking efforts to bring Venus out of her shell had me cheering for this child who had so many strikes against her. I recommend "Beautiful Child" for all readers who are interested in the art of teaching children with special needs.

Published by Thriftbooks.com User , 20 years ago
Once again, Torey Hayden has yanked my heart from side to side! Venus, the seven year old in this story, is an amazingly brave soul. Just as Sheila was a "fighter" and "survivor" in Hayden's book, ONE CHILD, little Venus shows the same strength and courage in the face of what most of the world would consider insurmountable odds, although not necessarily in the same ways. This book stirred me in a most peculiar way. I always have a desire to "help" after I read Hayden's books, but this book dug even deeper into my heart. I guess there are some things in this world that the majority of us will just never be able to understand at all.I can tell already that I will be wondering for years, unless a sequel is written to answer my questions, what happened to Venus.

AND THE WALLS CAME TUMBLING DOWN

Published by Thriftbooks.com User , 20 years ago
When author Torey Hayden first meets Venus, then 7, the child is perched atop a high wall on the school playground. Venus rarely speaks and goes into attack mode when jostled by other children on the playground. Venus remains a silent observer in the class she shares with 9-year-old Billy, a gifted child with a minor case of dyslexia and a propensity for impulsive behavior; 8-year-old Jesse, a boy who has Tourette's Syndrome; 6-year-old twins Shane and Zane who have the congenital condition of Fetal Alcohol Syndrome and part-time resource pupils 8-year-old Gwennie, a bright girl whose behavior and verbalizations are described as autistic and 8-year-old Alice, also given to frequent non sequitors interspersed with very poignant comments.This group finally unites after a series of setbacks. Early in the year, fighting broke out contantly among the boys; Venus, too displayed a fair share of aggression whenever she attacked someone who bumped into her. The tension among the pupils was paralleled in Torey Hayden's differing educational approaches with her aide, Julie.Matters reach a critical head when Venus is placed on homebound instruction for 2 months after she severely injures another child. During her absence, the boys team up by forming the poignantly ironic named group, "the Chipmunks" as a way of helping one another and gaining positive reinforcement. When Venus returns, she literally has to start from scratch. A chance encounter with a 1980s comic figure, She-Ra, sparks her curiosity; from there, Venus and teacher Torey Hayden knock down yet another wall. Venus expresses her wishes for a better life and for power and a "magic sword" like She-Ra has; she begins to inch her way into the group.More walls are knocked down; Julie is transferred to another school and an aide named Rosa takes her place. Rosa and Venus bond instantly; the love between them is truly heartwarming. The boys make remarkable strides as well. In one especially touching exchange, Billy tells Jesse how he has overcome his bigotry towards other races because he personally knows Jesse, who is a member of a different race than Billy. Major issues are explored; each child has good insights and heartwarming observations. During such round table discussions, even more walls come tumbling down.As Venus develops more confidence in herself and relies less on She-Ra and her magic sword, she develops friendships in the class. Alice literally takes Venus under her wing and insists on "being best friends" with her. A good placement in a loving, nuturing home after having endured years of abuse and neglect also accelerates the progress Venus makes. I like the way the book provides updates on the progress of each pupil.I can't recommend this one highly enough.

Published by Thriftbooks.com User , 20 years ago
Once again I was drawn into feeling like I was in the class room with Torey and her kids. She is amazing how she connect with these kids. It's a shame there aren't more teachers like Torey. You will love this book. It makes you feel like you are right there with her teaching, you laugh and cry with her and feel the same frustations as she feels. It's so real. I love how she gets down on the child's level and treats all the children like they are people too without the children realizing that is what she is doing and how at the end the children teach themselves and Torey as much as Torey has taught them. I like the fact that when the children have a viewpoint that Torey listens and respects it and learns from it as do the children. It's so great how the children come to love Torey when they have such hard lives outside of school and come into her class with such bad feelings of the world and everyone in it. That in the end the children feel really good about themselves. Great job Torey, keep the books coming. You're great....

Published by Thriftbooks.com User , 20 years ago
Torey Hayden again tells the story of one of her special education classrooms. Again she is able to nearly hypnotize the reader, rendering them unable to put down the book. Again she knows how to use the perfect mixture of humor and pain to create a story told from truth.The only difference between this book and her others is the fact that there has been a large time gap between the writing of them. Torey has changed is some way concerning the way she writes, which makes the whole reading experience a little more exciting and special.Read this book - you won't regret doing so.
Trustpilot
Copyright © 2022 Thriftbooks.com Terms of Use | Privacy Policy | Do Not Sell or Share My Personal Information | Accessibility Statement
ThriftBooks® and the ThriftBooks® logo are registered trademarks of Thrift Books Global, LLC