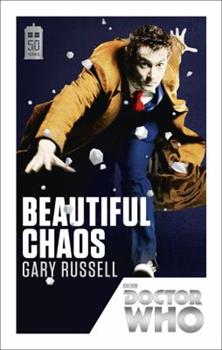 (Part of the Doctor Who: New Series Adventures (#29) Series and Doctor Who Cross Cult (#2) Series)

Published by Thriftbooks.com User , 12 years ago
What such a thing to have happen when you go home for family time. Bernanrd Cribbins does such an excellent job in reading this story. Shivers ran down my spine when I considered an alien intellegence taking over a specific genetic ethnic group (ie. the Italians). It's a mad cap adventure involving the Doctor, Donna, Wilf, a sweet lady w/Alzheimers and two boys when they team up to go after the Mandragora. Who knew that horoscopes could be so exciting?

Published by Thriftbooks.com User , 12 years ago
The Doctor and Donna in action again! Well, not really, more of a flash back, but that still counts. Chaos is coming and it has been here before. In fact, I've met it before too. The evil we are about to face was in Doctor Who, during the Fourth Doctor's adventures. That's right, Tom Baker fans, a certain evil from Italy is back. If you have no idea what I am talking about, I would suggest you get Doctor Who: The Masque of Mandragora (Story 86). Outside of the threat to Earth, Mankind, the Universe and so on, the focus seems to be on the Noble Family and, mostly, on Wilf, who is a great character and I hope they have more books with him. Or maybe his own spin off series! Well, maybe not, but still it is a good book to sit down with, have some tea and cookies, and just enjoy it on a rainy day.

Published by Thriftbooks.com User , 12 years ago
I waited anxiously for the Donna/Doctor Ten novels to come out, and on the whole, I was not disappointed; and "Beautiful Chaos" is the best. Unfortunately, they appear to have saved the best for last, because it doesn't look like there will be any more Donna books (Martha got twelve!). This is sad, because of all the Doctor Ten books, the ones with Donna are pretty much just as good as most of Season Four was -- sharp, funny, and touching, often all at once. The characterization of Donna, Wilf, and most importantly, the Doctor, are excellent here; Gary Russell does a fine job of capturing the voices, to the point where you can almost see it as filmed episode rather than novel. His twists and turns are excellent, and despite the sadness of the ending (no spoilers)--or perhaps because of it--this does stand as one of the finest of the Young Adult Doctor Ten novels. I just wish they had opted for more Doctor Ten/Donna novels. It's a shame her time with the Doctor was cut so short when she was such a very good companion!

Best tie-in novel yet - by far

Published by Thriftbooks.com User , 13 years ago
My expectations for this novel were not high, I'll admit: I've read all the Rose-era novels, and for the most part they're forgettable. I did enjoy some more than others - Jacq Rayner's Winner Takes All stands out for snarky Nine and Mickey, and some rather nice Nine and Rose segments, but the Jack novels were mostly awful because of very poor Jack characterisation - no more than a caricature. The Ten and Rose novels were mostly readable, but I've read far, far better fanfic. I think overall my issue with the novels is something that isn't really the authors' fault: they're aimed at a teenage audience, for the most part. The focus isn't intended to be characterisation or character development; for the most part, the audience wants familiar characters and a plot that has enough twists and scary bits to keep them interested. Personally, I tend to need a bit more than that to keep me interested, in particular character development and relationship development - and I stress that I mean relationships of all kinds: family and friendship above all. Beautiful Chaos gave me all that and more, and above all characters I could recognise, whose dialogue leaped off the page such that I could hear it in my head as I read, and really developed Sylvia and Wilf, and Donna's relationship with them, beyond what we see on-screen and made the Mott/Noble family so very much richer as a result. The book actually starts post-Season 4, with Sylvia visiting Wilf up at the allotment, and we get to see the impact on the two of them of what the Doctor did to Donna - whether or not any of us feels that he had a choice, it can't be denied that he left Wilf and Sylvia with an enormous burden and didn't do anything to help them cope with it. This prologue, and the epilogue, are close to heartbreaking. The main story is set some time before that, after The Doctor's Daughter and before the Library episodes. The Doctor brings Donna home for the first anniversary of her dad's death, and of course he gets caught up in an adventure. It's a rattling good alien adventure - the Mandragora tries to take over Earth - but there's the backdrop of Donna's family dynamics, her conflicted relationship with her mum, the secret of what she's really doing with the Doctor which she and Wilf are keeping from Sylvia - and Wilf's lady friend, who is an Alzheimer's sufferer. The Doctor, surprisingly, even seems willing to play domestic, at least a bit - but Russell gets him perfectly as well, including his manipulative side. And the Doctor-Donna close friendship is played perfectly, as is Wilf's love and protectiveness for Donna. He and the Doctor understand each other perfectly on that one, which make the post-Journey's End bookends even more poignant. Much to my surprise, this book gave me a much better understanding of, and even sympathy for, Sylvia. I'm expecting that the other Donna novels won't live up to this standard. Whether they do or not, if you're a Doctor Who fan and loved Donna's

The best stories in the Whoniverse take place on Earth

Published by Thriftbooks.com User , 13 years ago
Just spent the evening reading a great story. I don't know if it was the insight to Doctor Who after Donna but this is one of the better books. Gary Russell wrote this so well I could hear Donna, The Doctor, Wilf and even Sylvia speaking. Bravo!
Trustpilot
Copyright © 2022 Thriftbooks.com Terms of Use | Privacy Policy | Do Not Sell or Share My Personal Information | Accessibility Statement
ThriftBooks® and the ThriftBooks® logo are registered trademarks of Thrift Books Global, LLC