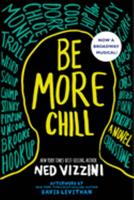 The groundbreaking novel that inspired the Broadway musical Jeremy Heere is your average high school dork. Day after day, he stares at beautiful Christine, the girl he can never have, and dryly notes the small humiliations that come his way. Until the day he learns about the squip. A pill-sized supercomputer that you swallow, the squip is guaranteed to bring you whatever you most desire in life. By instructing him on everything from what to wear,...

Published by kas19 , 1 year ago
I tried to get through this book, but it was probably one of the worst I’ve read. Even as a teenager, I don’t think I would’ve enjoyed even this level of immaturity and lack of depth. It didn’t have that insight like John Green has in his YA novels. Would not recommend personally.

The drawbacks of technology

Published by Thriftbooks.com User , 18 years ago
Hearing voices is never a good thing, unless the voices are coming from your squip. No, not script --- squip. Google "squip" and you'll come up with a boring kill-the-space-aliens game and some information about a supercomputer the size of an aspirin, currently illegal to use. Swallow the computer and become cool. Get all the girls, or guys. Dress sharp. Learn to flirt and drive, and generally be more chill. Jeremy Heere, hopeless nerd, wants to date beautiful Christine Caniglia. He knows she's way out of his league, until he acquires a squip, which guides him through a physical and mental transformation. Following the squip's instructions on how to dress, speak, kiss, act and exercise, Jeremy rises above his geek status and becomes --- dare he say it --- popular. This, of course, comes with a few problems. Computers, for all their quantum mechanics, can't quite get the hang of human emotions, like love and friendship. They can't understand why Jeremy wants to take his geeky best friend Michael to a party featuring the hottest girls in school. And while they may tell Jeremy what to say to Christine, they can only calculate so many possible outcomes of the conversation. Jeremy's squip eventually leads him to disaster, and he has to figure out what he's going to do all on his own. Sarcastic, sexy (well, Jeremy wishes there was sex) and hilarious, this thought-provoking book is not to be missed by anyone who has ever wanted the impossible. The larger-than-life characters fit in perfectly with the idea of a pill-sized computer running Jeremy's life at Leni Lenape High School. This book, however, is far from fluffy. It raises some important questions as to how far one person will go to impress another and the depth of honesty needed in human relationships. --- Reviewed by Carlie Webber

Published by Thriftbooks.com User , 18 years ago
I just wanted to write to say that I just finished Be More Chill and loved it. I really liked how you made Jeremy's character easy to relate to and have him do stuff that most of us have done at least once in our lifetimes. I also liked the ending and how you didn't conclude everything. I just got my wisdom teeth out on monday, and I can honestly say that without that book I would have been a lot more miserable. It helped me through my boring days of just sitting around. There were many nights where I told myself "Ok, I am only going to read these 4 chapters," but I'd soon find myself on the tenth chapter instead. So, thank you for writing a book that is not only enjoyable but extremely truthful!

Published by Thriftbooks.com User , 18 years ago
You don't have to be a youthful twenty-something to appreciate the smell of Ned Vizzini's eternal teen spirit. A compelling tale of rejection, redemption, and rejuvenation, the persona of the persecuted high-school square-peg Jeremy Heere is really a story of good vs. evil. The ending is a shocker! A joyful read for misfits of all ages. For those about to squib, we salute you.

Published by Thriftbooks.com User , 18 years ago
Reviewed by Steve Hansen for Small Spiral NotebookSquip is the hook; the dynamo that powers Be More Chill. It's what separates Ned Vizzini's tale of dork-cum-cool guy from your other, similar, young adult fare. Jeremy Heere compounds his dorkdom by documenting each slight onto forms he's coined 'Humiliation Sheets,' ticking off every snicker, snotty comment and a number of other embarrassments he suffers daily at the hands of his peers. No explanation is given for the purpose of these sheets other than to serve as some kind of proof of their originator's dillweed-ness. They seem to be an adolescent substitute, of sorts, for self-flagellation. Heere is a loser, indeed. Enter the aforementioned 'squip' (a nanocomputer perched in the brain of anyone who takes the 'magic' pill), and Jeremy goes from social pariah to student body messiah. He ascends the social strata all the way to the pinnacle of cool, thanks to his execution of the instructions given him by the voice inside his head. His squip directs him to drop his dearest, best friend Michael for political expediency's sake (how can he remain friends with somebody now below his modicum of cool?), and advises Michael to hook up with the popular chicks in order to send Christine, the girl he really likes, into a jealous tizzy. Is this computer thing Machiavellian or what? The question is can Jeremy live with himself now that he's gone from likable geek to scheming ass? This novel will appeal most to those still in high school or a few years removed, thus its 'Young Adult' designation. Not to say Vizzini's writing doesn't have some universal appeal, it's just that high school 'problems' are so petty, insubstantial and contrived to anybody who's had to survive for a sustained amount of time in the real world. The tragedies of acne or someone's refusal to return a greeting in the hall seems pretty small when weighed against a home foreclosure are the scourge of a bad credit rating. That said the squip gimmick has landed Vizzini's book a movie deal. And as you read Be More Chill, you may find yourself wondering if this wasn't the author's (perhaps unconscious) intention all along. What Hollywood executive could turn down American Pie with a Keanu Reeve's voiceover? Whether on the page or the silver screen, Be More Chill will entertain high school kids nationwide, and, no doubt, a few of their parents.

Published by Thriftbooks.com User , 18 years ago
So, I got Be More Chill last night and finished it this afternoon. . . It was a truly not a let-down. Actually, I found myself more consumed with the book than with my so-called friend (I was at his place). Judging from Ned's first book, I thought that he had a lot of voice, which is really great to have, and not very common. Anyways, now I know he's got a lot of voice. The people in the book seemed very realistic, very life-like. I found that there were a lot of things that I could relate to in the book, really well, actually, and that was pretty cool to me, especially after the fire at the party, and the "after-shock" of it all. . .When my school principal killed himself, everyone, even the people that were planning on rebelling and ambushing him, broke down and became very upset. . .Like Jeremy, I didn't get it, and thought it was lame, and a whole bunch of other things along that line. Anyways, the voicing of the SQUIP was very funny (For some reason, I expected it to be Harrison Ford. .Or maybe Clint Eastwood. .But Marty Beckerman would've been funny. . .Anyways), and so "smooth" it hurt. I don't really have any parts that I disfavored. . Ned defined his characters, but it seemed that there was some vagueness where people could say "Oh, I can relate to that. . OHMYGOD, my dad is the same way!"
Trustpilot
Copyright © 2022 Thriftbooks.com Terms of Use | Privacy Policy | Do Not Sell or Share My Personal Information | Accessibility Statement
ThriftBooks® and the ThriftBooks® logo are registered trademarks of Thrift Books Global, LLC