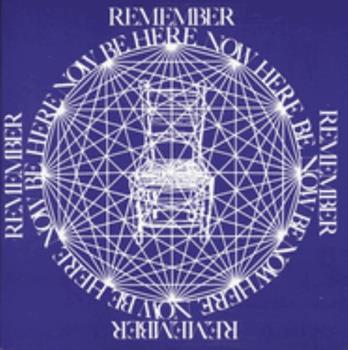 by Ram Dass and Richard Alpert

Beloved guru Ram Dass tells the story of his spiritual awakening and gives you the tools to take control of your life in this "counterculture bible" (The New York Times) featuring powerful guidance on yoga, meditation, and finding your true self. When Be Here Now was first published in 1971, it filled a deep spiritual emptiness, launched the ongoing mindfulness revolution, and established Ram Dass as perhaps the preeminent seeker of the twentieth...

Published by vernon , 10 months ago
I bought this book when i was a 17 year old country boy in south Georgia 1st_edition 1969 i think, still have it still read it

you can get this book for cheaper on amazon if:

Published by L , 2 years ago
you feel like buying your spiritual resources from a company who has contracts with the military industrial complex, and is depreciating the value of labor everywhere -save about 3 dollars

Published by Thriftbooks.com User , 17 years ago
BE HERE for him, NOW One of the truly great men of our time needs our help. I write these words to encourage your generosity and support. Back in the 1960's a Harvard professor named Richard Alpert left behind the hectic world of academia and traveled to India - there he was to meet his spiritual teacher who gave him a new purpose to fulfill along with a new name. He of course is Ram Dass. His guru told him love everyone, feed people and see God everywhere. Ram Dass became a person who lived out this mandate - he did what so many of us could only dream. He connected to his spirit and devoted his life to serving others. In 1969 he wrote and published the signature book on spirituality and applied higher awareness, Be Here Now. In keeping with his commitment to love everyone and feed people, he donated all of the royalties and profits to foundations that did just that. With millions of dollars at stake, Ram Dass simply chose to live his life as a man of service to God. After years spent in India in pursuit of a higher more enlightened consciousness for himself and for our troubled world, he returned to the United States to lecture throughout the country. He spoke to packed venues wherever he went, and as always he donated the proceeds to such causes as would keep him in harmony with his mandate to serve. He co-founded the Seva Foundation (www.seva.org) and his writing and lecture fees were primary sources for this compassionate and inspired work. To me Ram Dass was and is the finest speaker I have ever heard, period! He was my role model on stage; always gentle and kind, always speaking without notes from his heart, sharing his inspiring stories and always with great humor. I tell you this from my own heart; I could listen to his lectures for hours and always felt saddened when they would end. He was the voice for Applied Spirituality - his life was the model. When he was threatened by having his own private sexual preference exposed, in a time when a closet was the only place that was even mildly safe, Ram Dass called a press conference and proudly announced his preference to the world. He paved the way for tolerance and love when no one else would dare to do so. Most of us could only dream of defying the conventional life and living out our inner callings to promote a cause that was bigger than our own lives - to leave the security of a guaranteed career - to leave a country where comfort was ensured; all to live in a foreign land with few conveniences, traveling and meditating for a more peaceful world. It is what St. Francis did in the 13th century and what Ram Dass did in our lifetime. When Ram Dass' own father, who had largely criticized his son's unconventional lifestyle, was close to death, Ram Dass devoted himself to 100% service in those final years. He fed his father, he bathed his father, he placed him on and off the toilet until the day he died. Why? Because he felt this was his mandate. He wanted to experience true service on a 24/7 b

The Sea of Existence

Published by Thriftbooks.com User , 22 years ago
Trying to describe the concepts expressed in this amazing book is akin to the proverbial five blind men each touching and then trying to describe an elephant. The concepts herein are hinduistic in nature but certainly linked to any and all "spiritual" expressions. The key to spiritual enlightenment is surrender - the surrender of desire, the surrender of ego attachments, the surrender of self - letting go of material attachments and becoming attuned with the "quiet voice" within all of us. The highlight of this book, without a doubt, is the amazing middle section which, through alternately hilarious and sublimely profound psychedelic illustrations and writings, describes the wretched state of being trapped in a materialistic and ego-centered world and, even more amazingly, guides those seeking enlightenment on the path to "moksha" - the state where one's ego - even the material world - are released. Words are useless when it comes to this undescribable place - referred to as the 'Sea of Existence'. The bizarre illustrations may be off-putting at first but I've never before or since read anything quite like "Be Here Now".

The 'truth' in three words?

Published by Thriftbooks.com User , 22 years ago
I know it's a cliché, but this book changed my life. I read it in 1973 when I was an angst-ridden twenty-something searching for a spiritual direction. I bought the book because I recognised Dr Richard Alpert from his association with Dr Timothy Leary and was curious to hear his post acid-haze spin on spirituality. What I found in the pages of this book planted the seed of a philosophy which has grown in my own consciousness, becoming the foundation for a spiritual life. The first part of the book deals with Dr Alperts spiritual awakening through the grace of his guru and his subsequent metamorphosis into the disciple called Baba Ram Dass. It is an inspiring tale for those not afflicted by cynical preconceptions and it inspired in me the desire to seek out my own guru. The central portion of the book was perfect for the times, when people who had opened the gates of their perception with the aid of psychotropic substances, were looking for more natural means to help keep them open. Using the words and teachings of many different spiritual masters, from Jesus to Ramakrishna, the book uses psychedelic, cartoon-like images to get the message across. And the message is Be Here Now. When I first meditated on the meaning of this exhortation, ten thousand bells began to ring in my mind. Of course! The past is gone, an illusion which exerts all kinds of negative influences on the human psyche. The future is even more illusory, in that it is so transient. It could be years long, or it could be seconds - who knows? Life can only be truly experienced in the present - in the here and now - and if we are to find peace and spiritual freedom, we must first do away with our attachment to the past and the future. This is the central premise of the books teaching and it is a profoundly important teaching. We live so much of our lives in the past or the future, we forget to experience the joy of the moment and in the third part of the book entitled `Cook-book for a Sacred Life', Ram Dass offers the reader some practical techniques. Meditation, yoga, posture, mantra, recipes - there is everything here for the novice spiritual aspirant wishing to bring a sense of sacred-ness into all aspects of his or her daily life. As a young man seeking spiritual knowledge and a pathway towards salvation, the rituals, techniques and teachings expounded in this book brought a magic to each day and a kind of unseen connection with Ram Dass and his other readers. Be Here Now was a vital component of my spiritual awakening and I would like to address my words to any open-minded person looking to tread the rock-strewn road towards self-knowledge, compassion and spiritual illumination. Read this book now!

THE MOST AMAZING BOOK

Published by Thriftbooks.com User , 24 years ago
AS A 16 YEAR OLD IN CANADA AND GROWING UP IN A VERY RELIGIOUS HOME, THIS WAS THE BOOK THAT HAS OPENED MY EYES. " THERE IS THE ANSWER.... AND IT WAS INSIDE ME ALL ALONG!!". I'M READING IT FOR THE 5TH THIME, BECAUSE ONCE, TWICE, FIFTY TIMES IS NEVER ENOUGH!! THIS BOOK JUST OPENS, OPENS, OPENS AGAIN YOUR SOUL, MIND AND BODY..... VERY CAPTIVATING, VERY TRUSTING..... VERY LOVELY. WORDS CAN'T EXPRESS MY LOVE FOR THIS BOOK.... AND FOR A TEENAGER (we get confused, we get upset, we need advice, and we need to know!) THIS BOOK IS THE ONE TO READ....THIS BOOK IS AMAZING.
Trustpilot
Copyright © 2022 Thriftbooks.com Terms of Use | Privacy Policy | Do Not Sell My Personal Information | Cookie Preferences | Accessibility Statement
ThriftBooks® and the ThriftBooks® logo are registered trademarks of Thrift Books Global, LLC