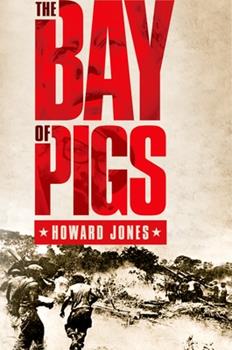 The Bay of Pigs

In The Bay of Pigs, Howard Jones provides a concise, incisive, and dramatic account of the disastrous attempt to overthrow Castro in April 1961. Drawing on recently declassified CIA documents, Jones deftly examines the train of missteps and self-deceptions that led to the invasion of U.S.-trained exiles at the Bay of Pigs. Ignoring warnings from the ambassador to Cuba, the Eisenhower administration put in motion an operation that proved nearly unstoppable...

Published by Thriftbooks.com User , 13 years ago
My husband was involved in the "failed" close air support that Kennedy did not supply.

An extremely important addition to the historical record.

Published by Thriftbooks.com User , 13 years ago
"(They had a) good plan, poorly executed." Such was the rather generous assessment of Cuban President Fidel Castro in the aftermath of the U.S. government's covert attempt to overthrow him in mid-April 1961. The fact of the matter is that with the benefit of hindsight most historians and military analysts agree that the Bay of Pigs was an unmitigated disaster. Author Howard Jones revisits this shameful episode in American history with his new book "The Bay of Pigs". If you have not studied this operation in detail before than you will find this one to be a real eye-opener. On January 1, 1959, revolutionary forces led by a young, charismatic Fidel Castro finally succeeded in toppling the regime of Cuban dictator Fulgencio Batista. Castro's increasingly anti-American stances quickly became a source of concern for the Eisenhower administration. President Eisenhower finally concluded that for national security reasons Castro would have to be eliminated. The covert plan being drawn up by the Joint Chiefs of Staff, the State Department and the CIA called for the simultaneous elimination of Castro by assassination and the invasion of the island nation by U.S. trained Cuban exiles to establish a provisional government. The idea was to encourage a popular insurrection in Cuba that would legitimate the entire operation. Time ran out on the Eisenhower administration and so when John F. Kennedy took office in January of 1961 he inherited the problem. President Kennedy had already become convinced of the wisdom of overthrowing Fidel Castro. Events were moving rather quickly now and Castro seemed to be rapidly aligning himself with the Soviet Union. Time was of the essence as the preponderance of evidence indicated that the U.S.S.R. was beginning to ship all kinds of military hardware to Castro. It became abundantly clear that the longer the U.S. waited the more difficult the task at hand would be. The operation was finally set for April 17, 1961. "The Bay of Pigs" chronicles in great detail how the actual plan was devised and who the key players were. Howard Jones also discusses at great length the reasons why President Kennedy seemed so reluctant to approve any direct involvement of U.S. armed forces in the actual invasion of Cuba. For the President, the idea of "plausible deniability" was an overriding concern and was ultimately the reason the operation was moved from Trinidad to the Zapata Peninsula. It was also the reason why the President made the decision to cancel the air support that for all intents and purposes doomed the operation. I was just 10 years at the time of the Bay of Pigs operation. Over the years I have read any number of references to just how bitter the Cuban-American community was at President Kennedy for the way he mishandled the invasion and abandoned the ground forces who were left to fend for themselves without any of the promised air support. Some have even suggested that disgruntled Cuban exiles may have played a role

Published by Thriftbooks.com User , 14 years ago
The Bay of Pigs operation has gone down in history as one of the pivotal acts of the Cold War. It was a military disaster and an embarrasment. It angered a generation of Cuban-Americans. It, apparently, made Castro more paranoid than he already was. It helped to engender the Cuban Missle Crises and it marked the high water mark of CIA sponsored swashbuckling. It has forever frustrated Kennedy lovers into finding ways to claim that the new president had no idea about it and that it was foisted upon him by Eisenhower's men, so that JFK's legacy would not be tarnisher either by failure or by the kind of reckless pre-emption that those who love Kennedy so often condemn in other Presidents. But for all the words spilled over the Bay of Pigs it has rarely been given a fare shake or a full accounting. Most of the books on the operation either examine one part of it or are old and dated. This book provides a full background of the invasion, its planning and its aftermath and meaning. It provides an inside look at the Kennedy administration and the decisions not to provide air support and the subsequent failure of the invasion. It gives a very fair account of what happaned and is not bogged down by rhetoric or politics. This is an important and timely contribution to the stroy of the Bay of Pigs, America and the Cold War. Seth J. Frantzman

The Bay of Pigs

Published by Thriftbooks.com User , 14 years ago
On April 17, 1961, approximately 1500 Cuban exiles trained and supported by the United States launched an ill-fated invasion against Fidel Castro at the Bay of Pigs in southwest Cuba. The Bay of Pigs invasion occurred early in the presidency of John F. Kennedy and constituted one of the great foreign policy missteps of the United States during the Cold War. In his new book in the "Pivotal Moments in American History" series of Oxford University Press, Howard Jones offers a succinct and sobering account of the Bay of Pigs and its aftermath. Written with quiet restraint, Jones's book has much to teach about American interventionist tendencies in Cuba and elswhere. Howard Jones is University Research Professor of History at the University of Alabama. He has written extensively on American history. Jones shows the many tangled threads in the Bay of Pigs story. Following Castro's ascension to power in Cuba and his increasing hostility to the United States, the Eisenhower Administration authorized the Central Intelligence Agency to plan and conduct what became the Bay of Pigs invasion. With the momentum the plan had gathered, the new president, Kennedy, allowed the proposed overthrow of Castro to continue. Kennedy was indeed an active participant and changed the original plan in several respects. In addition to the invasion by the Cuban exiles, the plan had several components that Jones documents well in his study. The CIA engaged in dealings with the Mafia in a plan to assassinate Castro before the invasion. The invasion also relied popular insurrection in Cuba to displace the Castro regime after the exile force had established a beachhead. In the event the initial landing did not immediately succeed, the plan was for the invading force to assume guerilla tactics by joining with local fighters in the Escambray Mountains of Cuba. Jones details how and why the plan failed at every level. He is critical of the plan at the outset for its interference with the internal affairs of a foreign nation, including the assassination of its leader, which had not committed acts of war against the United States. He also shows well how various parts of the Executive Branch, from the President and his immediate advisors, to the CIA, the Joint Chiefs of Staff, and the State Department tended to work against each other and to avoid responsibility for the unfortunate events that occurred in Cuba in April, 1961. The United States badly underestimated the resolve of the Castro regime, overestimated the likelihood of a popular uprising, and did not know the strength of Castro's air force. Beyond these concerns, Jones points to other factors which doomed the invasion from the outset. The primarily failing was the confusion between political and military goals in the invasion. Eisenhower had entrusted planning to the CIA rather than to the military in an attempt to minimize the public exposure of the United States. Through Kennedy, the policy was one of "plausible d
Trustpilot
Copyright © 2022 Thriftbooks.com Terms of Use | Privacy Policy | Do Not Sell or Share My Personal Information | Accessibility Statement
ThriftBooks® and the ThriftBooks® logo are registered trademarks of Thrift Books Global, LLC