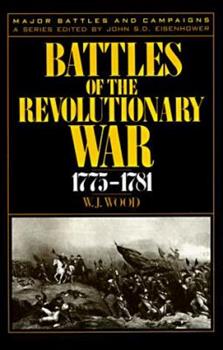 The Americans did not simply outlast the British, nor was the war just a glorified guerrilla action with sporadic skirmishes. Americans won their independence on the battlefield by employing superior strategies, tactics, and leadership. So W. J. Wood contends in this groundbreaking study of the battles of Bunker Hill, Quebec, Trenton, Princeton, Saratoga, Cowpens, and others. For each engagement he describes the types of combatants on each side and...

Published by Thriftbooks.com User , 13 years ago
I read a library copy of this book to obatin some further information on several Rev. War battles. So I had to obtain my own copy when I saw it offered at the right price. The author not only provides a solid overview of the battles, but uses the opportunity to analyze significant circumstances which materially impacted those battles. This book does not cover all the War for Independence battles. It does cover some which are not particularly well known or included in general works. For example, Oriskany (NY) was a British pincer movement of British regulars, French militia & Iroquois in the Saratoga Campaign where Benedict Arnold provided some assistance in a quick march to aid a beseiged Patriot fort another NY militia group was striving to relieve when ambushed at Oriskany. It expands your view of the operations at Saratoga [as does reading Washington's correspondence (John C. Fitzpatrick online) during August 1777 moving troops & examining Howe's shifting British troop reinforcements from England while struggling to open the Delaware River at Philadelphia. Enlarge your operational theater when studying our Revolution to see that the written summaries often miss a more plausible explaination of the actions taken.

Published by Thriftbooks.com User , 17 years ago
As this is my first book on the Revolutionary War since High school, I was excited to see what I missed as an student and to learn more of the military history behind the war. This work is splendidly researched and written and was difficult to put down. The book covers all the major actions of the war of independece from Bunker Hill through to the siege of Yorktown in riveting detail. The author claims it is not a history of the revolutionary war but of its battles. Here he does not dissapoint! His descriptions of the maneuvers and actions are great. During the Guilford Courthouse battle, after hearing the sounds of battle, I too, saw the redcoats comming out of the woods to engage the Maryland and Virginia Continentals! One can easily follow the strategic maneuvering and the reasons behind them from the viewpoint of both armies from the excellent maps provided. 16 pages of fine illustrations of all the major players both British and American grace the pages. This book is a must have for any military history buff who wants to learn or relearn the major battles of the war of Independence.

Published by Thriftbooks.com User , 21 years ago
If you are looking for a book on the complete history of the revolutionary war, this is not what you want. It only goes through certain numbers of battles so if you are not familar with some background history of the American Revolution you might get lost between chapter. However.... it contain excellent descriptions of the battles it covers: strategy, tactics, weapons, logistics, maps.... everything someone who loves military history would enjoy reading about. If you like to read about wars this is the book for you

Published by Thriftbooks.com User , 22 years ago
This is one of the best books on the battles of the American Revolution. having much of the smell of gunpowder about it, the author tells a straightforward tale of courage, hardship, defeat, and, finally, victory by an army of hard-bitten Continentals who became professionals through endurance, deadly on the job training, and the leadership of some of the best combat commanders in American history. Wood gives credit where credit is due, and woe to the leader or soldier that incurs his wrath and disdain. He pulls no punches, and his incisive narrative and wry wit are as sharp as a sabre slash. There is no beating around the bush here, and you can tell who and what he admires, and what he doesn't. The Continental Army may have been the best, most enduring army in American history. No American army ever had to endure, both from the type of hardship to the length of wartime service, that the Continentals did. They won because of three things: Washington, their own hard-won skill at arms, and the French intervention. These three factors are brought out in evidence in this volume. This excellent piece of scholarship and tale of high deeds beongs on every enthusiasts bookshelf and should be read and reread until the lessons sink in.

Published by Thriftbooks.com User , 23 years ago
If you are going to read one military book in your entire life, this is the one. It got me hooked on the Revolutionary War, and allowed me to gain a better understanding of the trials and tribulations involved in forging the nation

Battles of the Revolutionary War: 1775-1781 (Major Battles and Campaigns Series) Mentions in Our Blog 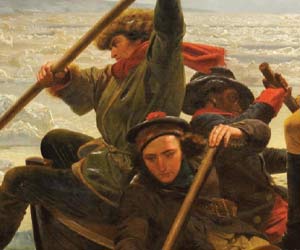 In honor of Independence Day, we offer a roundup of ten revelatory reads about the brutal, eight-year war that transformed a scrappy, young nation into the United States of America.