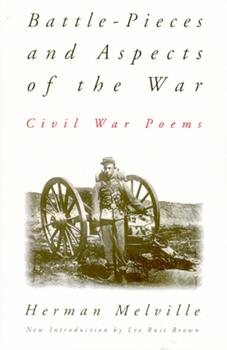 Battle-Pieces and Aspects of the War: Civil War Poems

A brilliant, magisterial verse opus . . . a masterpiece with virtually no readers.--Civil War TimesHerman Melville (1819-1891) stopped writing fiction after the publication of The Confidence Man: His Masquerade in 1857; as he entered his forties, he turned to poetry as his literary avocation. His first published book of poems was Battle-Pieces and Aspects of the War (1866), a meditation on the Civil War in short lyric and narrative verses, and a work...

Published by Thriftbooks.com User , 16 years ago
Reviewers in 1866 were mostly unimpressed with Melville's poetry because it frequently lacks metrical polish and rejects established forms. They were also put off by his pessimism. Although not every poem here is a masterpiece, they are consistently interesting because of Melville's reading of the events he describes as symbolic and portentous. Compared to items like "The March into Virginia" and "The College Colonel," Whitman's Civil War effusions come off looking rather vapid.

Published by Thriftbooks.com User , 16 years ago
Melville's "Battle-Pieces and Aspects of the War" (1867) intersects two of my great interests: the Civil War and American literature. This collection of poetry has never been well-known and critical opinion about it has always been varied and mostly lukewarm. But I have returned to it many times for its meditiative quality, for Melville's varied and conflicted insights about the Civil War, and for the tortuous quality of its poetry. This collection includes the full text of Melville's poems, including his notes to the poems and the prose essay, titled "Supplement", with which the book concludes. I find the book invaluable and eloquent in understanding the Civil War, contemporary reactions to it, and Melville himself. In his short introduction, Melville tells the reader that the poems were almost entirely composed following the conclusion of the War. They were composed at different times and with no thought of unity in the collection. Thus they are not an epic or informed by a single theme (although the unfinished dome of the Capitol runst through them as a metaphor) but rather present a series of separate, disjointed thoughts on the war. Most of the descriptions in the book derive from journalistic reports, although Melville had more first-hand experience with the Civil War than is sometimes realized. The major part of the collection, "Battle-Pieces" begins with John Brown's raid and ends with a poem title "America" in which Melville ponders the changes the Civil War had already wrought, and would bring about in the future in the United States. As a student of the Civil War, I find it valuable to read this book for Melville's depictions of conflicts, including Fort Donelson, Shiloh, the clash between the Monitor and the Virginia, Stones River, Antietam, Vicksburg, the Wilderness, Appomatox, and much else. He gives some details of the battles while reflecting on the courage of the soldiers, the terrible carnage of the War, the scourge of slavery that brought it about, and the uncertain and ambiguous future of the United States upon the War's conclusion. Melville realized that the War did not lead to clear conclusions or to false optimism. His poetry reflects the difficulty of a complex mind thinking about a terrible war. For this reason, the book has seemed pallid to some readers. But its lack of force is due to the depth of the struggle in Melville's mind to understand the conflict. The book is written in verse with meters and rhymes that frequently are awkward. Here again, some readers take this as a sign that poetry was not a congenial form to a Melville burned-out from the effort of writing his novels. But for much of the verse, the awkwardness of the poetry reflects the difficulty of the War as Melville works to understand the conflict and to present differing perspectives. Some of the selections, including "The Portent", "Shiloh","Rebel Colorbearers at Shiloh", the two poems about Stonewall Jackson, "Formerly a Slave", "On t

What The Library Journal Does Not Know.

Published by Thriftbooks.com User , 20 years ago
I am one of the editors of the Prometheus Books edition of Melville's superb book on the Civil War. Alas, the Library Journal review, posted for the volume, is pathetic: two sentences, only one on Melville's poems, and that one half wrong, for Melville had NO direct experience of actual fighting in the war. What is more, there is no reference to the extensive supplementary material in our volume--including fine essays by Helen Vendler and Rosanna Warren. Caveat emptor regarding any such "review" of the "critics."

Poetic Prose, but not Prosaic Verse

Published by Thriftbooks.com User , 22 years ago
It has been said of Herman Melville that his prose is poetic, but his poetry is not. In his time, in fact, his poetry was little-read and quite unpopular. Of course, _Moby Dick_ received only a lukewarm reception back then. Now, his poetry deserves a reassessment.First, _Battle-Pieces_ should be credited as artistic, sometimes beautiful, poetry. Some of the poems are somewhat doggeral, and would be much improved by a few less forced rhymes. Others, however, are truly moving.In these latter poems, Melville conveys the horrors of the war--and occasionally the humanity that shone through, uniting the brothers across the battlefield. Few men or women of the time had the experience (he participated in a chase of a Southern soldier) and writing ability to show us this time so effectively. As a result, he produced what, in my opinion, is a book at least as good as his most well-known novel.At the end of the book he includes an essay on Reconstruction, in which he pleads for an easy reconciliation with the conquered South, more along the lines with Lincoln and Johnson's plans than the Radicals'. While somewhat disappointing (we'd like the man who created QueeQueg to support Southern blacks' rights a little more), the essay is well-written, and allows us to read the nonfictional beliefs of a man we usually associate with fiction--just as the poems let us read the verse of a writer of prose.
Trustpilot
Copyright © 2022 Thriftbooks.com Terms of Use | Privacy Policy | Do Not Sell or Share My Personal Information | Accessibility Statement
ThriftBooks® and the ThriftBooks® logo are registered trademarks of Thrift Books Global, LLC