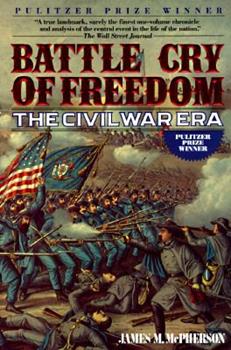 (Book #6 in the Oxford History of the United States Series)

The esteemed, Pulitzer Prize-Winning history of the Civil War that brings to vivid life, the generals, the presidents, the soldiers, politicians, Abolitionists, Southern fire-eaters, Northern barn-burners, Copperheads, and Know-Nothings. An instant classic, this is the single volume on the tragic war and its background that every historian--amateur or trained--will want to have on the shelf to read again and again.

Published by Diaz425 , 4 months ago
I ordered it as "like new" condition and received it without a dust cover. It wasn't noted as "dust cover is missing".

Published by Jack , 1 year ago
One of the best written books about the civil war It showed both sides in the same light

Published by Mark , 2 years ago
Best collections information in one volume

You Too Can be a Buff

Published by Thriftbooks.com User , 19 years ago
This book is colossal, in size and scope, in depth and breadth, in text and tincture. James McPherson touches on all aspects of the Civil War all within 862 pages. I know what you maybe thinking to yourself..."This isn't a casual read," or maybe, "History can be pretty dry especially 862 pages worth." Ease your foreboding thoughts though; McPherson's "Battle Cry of Freedom" keeps you engaged with interesting detail, personalities, and cause and effect without ever becoming bogged down. It's just good writing anyway you look at it.Once upon a time I developed quite an appetite for all things Civil War. McPherson whetted that appetite in one book. To learn as much would have taken a small library. If you read this along with Michael Shaara's Killer Angels, you too will be well on your way to Civil War buff-dom-ship. Good read.

Published by Thriftbooks.com User , 21 years ago
James McPherson's "Battle Cry of Freedom" is the best work on the politics of The Civil War available. For example, McPherson spends nearly the first three hundred pages of the book on the events, political and otherwise, leading up to the firing on Fort Sumter. As a result, his book gives the war a proper context that is lacking in many other works. His descriptions of the battles themselves tend to be brief overviews rather than extensive studies. But there are countless other volumes by other authors available for those whose interest primarily lies with the shooting war itself. McPherson would rather focus on why the North ans South decided to fight it out and once they did, how the war evolved slowly from an attempt to put down an insurrection to a holy quest to end slavery.No other period in American History has seen as many political changes of earthquake proportions as The Civil War. This fact often gets lost in the tales of epic battles, almost mythical generals and incredible sacrifice. What McPherson has done is place the great painting of the war in a proper frame to give one the whole picture. As such, it is vital reaading for anyone interested in the War and its effect on American History.

If you only read one book about the Civil War

Published by Thriftbooks.com User , 21 years ago
make it this one. I read this book after having read two other books on the Battle of Gettysburg. I found that I wanted to know more about the circumstances surrounding that battle, the situation of the two armies, the generals, the politicians, and the state of the economies of the two sides engaged. But I was daunted by the plethora of information on the American Civil War. I had no desire to immerse myself in some three or four volume 2000-page work because, aside from believing myself unable to keep everything in perspective and not to get bogged down in minutiae, I reasoned that plain laziness and attention span problems would keep me from ever finishing anything like that. Plus I had to admit that it was the battles that interested me the most, and I despaired of having to read a separate book or two on each of the dozens of battles that are considered "major" during those four years. Then I found this book: a single volume that encompasses the entire conflict from its military and political antecedents to the economic and sociological ingredients that forced the Union to enter into a war that would change forever the face of democracy. And this book did not give short shrift to the battles. To the contrary, the battles remain central and are accompanied by helpful maps. I took a chance on this book and now that I have finished it I have to say that it is all that I could have hoped for. Battle Cry of Freedom does what would appear to be the impossible: it includes virtually everything of consequence about the war and continues to hold the reader's interest. There are periods, especially when delving into some of the voting and politicking, the changes of party affiliations, voting data, etc., that get somewhat tedious. But if the reader is willing to work his way through these chapters he finds that he will come out the wiser, and that the next chapter, perhaps one on the next military campaign, will be better understood in itself because the larger context has been appreciated.How James McPherson (no relation to the Union general of that name) was able to do this is nothing short of astonishing, a kind of scholarly and artistic legerdemain that allows so much to be packed into so short a space. If you want to know as much as your head can comfortably hold, and you do not want to read an entire shelf of your local library to do it, then this book is a must. My wife and I read large portions of this book out loud to one another (heartily recommended) and had our own discussions about it. We also read, concurrently, a shorter book, "Decisive Battles of the Civil War" as a companion piece to get another concise overview of the military engagements themselves.McPherson has a definite Northern bias, but he is always fair about giving the other side its time in court. It is, after all, the North that won, and our country is what it is today because of that. The South's many disadvantages were built into i

The BEST single book on the Civil War era

Published by Thriftbooks.com User , 23 years ago
McPherson has done an extraordinary job of presenting the history of a complex time period, the Civil War era (including the events leading up to the war). While literally tens of thousands of books have been written on this subject, "Battle Cry of Freedom" is unsurpassed in its ability to clearly explain the best current understanding of what took place, in language that will captivate the reader, covering all aspects of the times in just the right amount of detail. The author strikes a careful balance, treating all sides in the conflict honestly and perceptively. The quality of the research that underlies this book is impeccable. This would be the one single book I would recommend most strongly to anyone who wanted to learn about the events leading up to the war as well as the war itself. It is easily understandable by the novice, yet also quite worthy of reading even by one who is already an expert on the history of this period. If you could read only one book on American history, this should be it!

Published by Thriftbooks.com User , 23 years ago
As a British reader, McPherson's book was an introduction to Civil War history for the purposes of coursework, and I found it superb.The initial three hundred pages provide a sweeping overview of the social and political pressures that led to war. There is then a hundred or so pages that vividly paints the attitudes of a nation faced with war, and finally the military narrative kicks in.McPherson writes with exceptional poise, balancing the chronological and thematic threads of his work to near perfection. Events in the west, east and political spheres of the war are detailed with the intricate interconnections intact due to excellent arrangement. This narrative is well scattered with analysis and presentation of different viewpoints, as well as sections of broad thematic interest eg. POW camps. There are more than enough quotations, both from primary and secondary sources.As for bias, I happened to think the bravery of the Southern soldiers, and the pride of the Southern people, came across well. Some reviewer's comments lead me to believe they had read a different book to me!"nothern soldiers...had no love for slavery. They fought for the Union and against treason...whilst some Yanks treated contrabrands with a degree of equity...the more typical response was indifference, contempt or cruelty."The reader is constantly reminded of the vein of racism of Northern society, ranging from the poorest immigrant fearing for his job, to the Democrat politicians who persisted in playing the 'race' card until the very end. The leftward shift of Lincoln is also noted. As for Southern motives:"slavery and independence were each a means as well as an end in symbiotic relationship with each other, each essential for the survival of both"In no way does McPherson cite slavery as the lone cause, he (sensibly) notes that it was the clash (via all the issues eg. Kansas, California, Dred Scoott which he details in the early chapters) that was at the centre of the "perceived nothern threat" to "preserve (the South's) vision of the republic of the founding fathers - a government of limited powers that protected the rights of property."The most I would concede that he could perhaps hammer home the state rights point a tiny bit more, but I cannot credit that he paints a polarised picture as suggested by some other reviews. In fact, some of the counter-arguments look to me as though they have been lifted straight from 'Battle-Cry of Freedom's text!My only (minor) complaint was that the epilogue, an analytical overview, was so useful and interesting it should have been a lot longer!This is one of the best historical works I have ever read and was supremely useful to me.
Trustpilot
Copyright © 2022 Thriftbooks.com Terms of Use | Privacy Policy | Do Not Sell My Personal Information | Accessibility Statement
ThriftBooks® and the ThriftBooks® logo are registered trademarks of Thrift Books Global, LLC