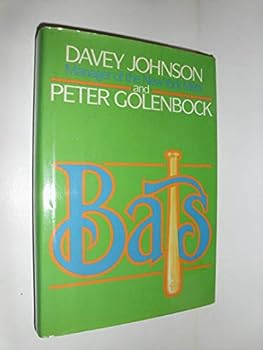 by Davey Johnson and Peter Golenbock

Bats is the autobiography of the man who built the New York Mets into the formidable force they now are. Focusing on the 1985 campaign, it is filled with the thrill of the pennant race including... This description may be from another edition of this product.

Published by Thriftbooks.com User , 16 years ago
The 1986 New York Mets were the World Series Champions led by one of the greatest managers in franchise history, Davey Johnson. But this book, Bats, is about the 1985 Mets, a second place finishing, good team. They say that no one remembers who finishes second. I would like to change that and say we should remember who comes in second if they should come in first the following year. Which is what the Mets did. With this viewpoint in mind, one would and should take a look at Davey Johnson's season long account of the year before the year of the legendary 86 team. Within Bats is a look at what Johnson saw, felt, and thought while he maintains a rocky relationship with Frank Cashen, the general manager, develops a heavy dependence on Rolaids, and issues one hundred and two hundred dollar fines to players for base running mistakes and showing up late to the ballpark. He talks about what he did to get the job and how he handled his players; Keith Hernandez talking in the third person and like a kid when he points out a good accomplishment to Johnson "did you in see Mex hit that home run?", Doug Sisk, with his inconsistent pitching performances, gets the most mentions in the book, , and his prediction about Dwight Gooden pitching a perfect game in the future (he does, but for the Yankees in 1996). Probably taken from a daily journal, the book is very autobiographical and provides a pretty well rounded look at Johnson, the man and manager. Being only in my early twenties, I was only four and five and too young to understand the Mets of the Eighties in the same way I came to understand and love the Mets of the Nineties (the hard decade that it was) and, of course, the 2000's. Having got Bats, I feel closer to my favorite sport franchise and caught up in terms of history. Did you know that the 85 Mets passed up two opportunities to re-acquire the great Tom Seaver? Before I got Bats, I read Jeff Pearlman's, The Bad Guys Won, about the 1986 Mets. For the intellectually curious Met fan or any baseball fan, I would recommend both books as great holiday gifts. I would recommend Dwight Gooden's Heat as the great stocking stuffer as well.
Trustpilot
Copyright © 2022 Thriftbooks.com Terms of Use | Privacy Policy | Do Not Sell My Personal Information | Cookie Preferences | Accessibility Statement
ThriftBooks® and the ThriftBooks® logo are registered trademarks of Thrift Books Global, LLC