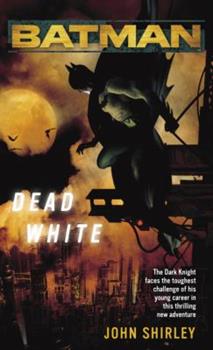 (Part of the Batman Series and Batman Del Rey (#1) Series)

Who better than Batman to protect the dangerous city of Gotham, where even the cops are crooks? But the latest imminent terror might be too much for the burgeoning Caped Crusader, who is still carving out a place for himself in the minds of Gotham's criminals. There's a host of deadly new weapons in Batman's glittering, sinister city--in the hands of a psychotic mastermind called White Eyes. With his radical murder machine, the fiendish leader of...

Published by Thriftbooks.com User , 13 years ago
I am not one to call reading material a "mind f*ck" as it usually requires a full on sensory assault, but this collection of black inked pages is just that. GREAT read !!!!

Published by Thriftbooks.com User , 14 years ago
What a treat to have an author of John Shirley's skill dip his hands into the Batman mythos. It is funny that some reviewers have commented negatively about the inclusion of politics. Funny considering that Batman is a vigilante who would not exist if he was not frustrated by the system. The deep brooding that John Shirley brought to his batman is even more impressive if you realize he wrote before any of us saw Nolan's modern updating of batman. John Shirley has created a brutal realistic batman that goes very well as a follow-up to the recent film. If you love Batman begins and think it was the right path for the hero then you need to read this book.

Published by Thriftbooks.com User , 14 years ago
A book set early in Batman's career, when Gordon is still a Captain. However, given the fluid superhero timelines and the gear Batman is using, it is set close to the modern day, with hints of anti terrorist combat air patrols being problems for Batman to sneak Batplanes past, and that sort of thing. He uses body armor a lot at this point in Shirley's version, and actually gets hit by more than one bullet. The antagonists are a group of crazy drug dealing white supremacists, led by a nut, and a nutty technological wizard. An ex-Gotham cop, a couple of Federal agents, and the cops son also get mixed up in this. Cormac, the police guy and bounty hunter is a pretty good character. The supremacists have developed some nasty automatic weapons, in particular a hybrid machine gun/shotgun, and man portable missiles. They do have a final plan, which involves political destabilisation of the USA via the expedient method of blowing the crap out of a large percentage of the current leadership. Batman is stretched physically, technologically and mentally to cover this, as an old training partner he had a thing for has come to town, and he most definitely gets physical with her. During one cute discourse on the actual flying mammals that hang around his cave, it is discovered that he and Alfred have a particular bat as a pet, one with a hole in its wing that they looked after. One funny quote by a old-timer bounty hunter acquaintance of Cormac's : "I mean, jeez, how can you take a guy like that seriously, wears tights, leaps about on the roofs, wears a mask, thinks he's the Phantom or something." A tossup on this one, 3.75 might be just about right.

Don't listen to the naysayers - this bat is smart.

Published by Thriftbooks.com User , 14 years ago
I guess some of the folks who read this book were mad that Batman didn't drink Budweiser and go gaybashing. I found it to be an above average Batman yarn with action, interesting tech, odious villians, and a tough, smart Batman. Those who call this book "liberal" are the same guys using the term "College boy" as an insult. Maybe they were upset that Batman beat up white supremacists. They should just go watch some Larry the Cable guy movies and beat their kids.

No Guts, No Glory: A Darker Knight For Darker Times

Published by Thriftbooks.com User , 15 years ago
I found the author's unapologetic realism to be quite refreshing. I did not believe there is too much profanity in this book (with the notable exception of the n-word, which in the context of the story and in the interest of retaining realism, I found necessary. Leaving it out would've smacked of PC catering and, frankly, weakness on behalf of the author). Batman's gadgets were really great. For one, Batman has always dealt in gadgetry - and what a relief it was for me to find them seamlessly integrated into the action here. I have to say they were definitely cool, and always utilized for a specific function integral to Batman's intentions. I also did not find Batman to be too hardcore in this novel. Hardcore & Batman go hand in hand; and the author definitely delivers on that count. If anything this book is helped by the author's sociopolitical outlook. It certainly brings the narrative closer to the spirit of vigilantism cultured by the protagonist. Would that there were more authors courageous enough to call it like it is. One of the things I most enjoyed about this new tale of the Dark Knight was how the author managed, quite skillfully, to achieve a near perfect blend of classic Batman action integrated into a narrative souped-up for our times. I think it's great to have this timeless hero "revamped" into our post-911, globalized world. And I must stress that the author managed to inject his sociopolitical commentary with genuine subtlety and grace. Speaking of original invention, I found it refreshing to meet a new villain in the Batman mythos. "White Eyes" is a great name for a real super creep. This character literally defines - is a walking avatar of - everything that is most wrong with our society today, that is, racism & selfishness. The subject of racism is certainly not an easy one to tackle in any context; to have done so with such painstaking care to the telling minutae in a superhero story requires guts and sophistication, both of which the author possesses in spades. I don't want to reveal any spoilers to drive home my point, just trust me: every little last detail of the narrative is perfectly painted into place (and the best thing is, you don't really notice it interrupting the seamless flow of almost constant fighting and action). As for parents buying this book for their kids - - well, if they're 13 or over, why not read it with them, or at the very least, make sure to read it before handing it over, so that afterward, you might have a discussion about it with them. This admittedly more mature tale of our Dark Knight embroiled in grimmer times has beneath its action-packed veneer some important family-values messages; in particular, in the relationship between one ex-Gotham cop who works as a skip-tracer (bounty hunter) and his estranged son. I thought this particular sub-plot worked effectively and had an important and positive underlying message for parents and teens. In short, yes, it is a "Batman for
Copyright © 2020 Thriftbooks.com Terms of Use | Privacy Policy | Do Not Sell My Personal Information | Accessibility Statement
ThriftBooks® and the ThriftBooks® logo are registered trademarks of Thrift Books Global, LLC