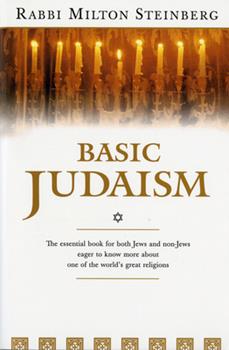 Rabbi Milton Steinberg's Basic Judaism is one of the best presentations of essential Judaism (Christian Century).Concise and elegant, this is a book about the faith, ideals, and practices that form the historic Jewish faith. Including both the modernist and the traditionalist view in his exploration, Rabbi Steinberg discusses the Torah, what Judaism says about God and the relationship between man and God, the nature of good and evil in a moral society,...

This Book Brought Me Home

Published by Thriftbooks.com User , 20 years ago
Steinberg addresses all of my concerns and confusion, one by one, and I am grateful. I was confused about what We actually believe and aspire to, and I now know that my birth religion is all that and a bag of chips, thanks to this short, well-written work.

Published by Thriftbooks.com User , 21 years ago
This is a basic introduction for people who either want an overall review of the basics or for people about whom it can't be assumed they know even the basics, like me. Rabbi Steinberg's best quality is his ability to break down and pick apart the basics and his ability to write with extraordinary conciseness. I never felt he was talking down to me, but his handle of English for explaining the complex theological and philosophical concepts was truly remarkable. He also makes a point of drawing out the differences among Jews about Judaism, frequently contrasting "traditionalists" with "modernists". I can't imagine I could have chosen a better book for getting the concept of Judaism. There probably are better books to get, though, if you are looking for a book about how to live as a Jew. The book is obviously very pro-Jewish and he seems usually to give the modernists the better slant without being disrespectful to tradition. If you just want to know what Judaism is, I can definitely recommend this book.

The closest you'll get to what Judaism is.

Published by Thriftbooks.com User , 23 years ago
The thoughts and feelings of the Jewish people are nearly impossible to catagorize. This book, however, goes halfway and encompasses all of Jewish religion. Though it is basic (as the title suggests), it is thorough enough to prime one for going into other Jewish studies. It is still simple enough that it has time to explain differences between Orthodox, Conservatives etc. on some issues. It perfectly completes the title "Basic Judaism."

Published by Thriftbooks.com User , 25 years ago
Steinberg's small volume is one of the best introductions to Judaism ever written. It has a philosophical bent, but also explains traditional and modern Judaism in a way which is easy for the layperson to understand. Though it was written decades ago, it is as fresh today as it was on the day it was first published
Trustpilot
Copyright © 2022 Thriftbooks.com Terms of Use | Privacy Policy | Do Not Sell or Share My Personal Information | Accessibility Statement
ThriftBooks® and the ThriftBooks® logo are registered trademarks of Thrift Books Global, LLC