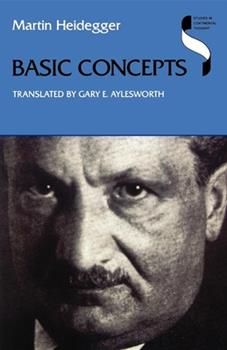 Basic Concepts, one of the first texts to appear in English from the critical later period of Martin Heidegger's thought, strikes out in new directions. First published in German in 1981 as Grundbegriffe (volume 51 of Martin Heidegger's Collected Works), it is the text of a lecture course that Heidegger gave at Freiburg in the winter semester of 1941 during the phase of his thinking known as the "turning." In this translation, Heidegger shifted his...

Published by Thriftbooks.com User , 20 years ago
As far as the later Heidegger goes, Basic Concepts is as good a place to start as any. The book is short, there is not a great deal of discussion of books you might not have read (like in the Parmenides book, which is roughly contemporaneous). Basic Concepts is post-Kehre Heidegger, although the turn seems to me to be an elaboration of what is already present in Being and Time as the silent voice of the inaudible call. There is also a shart primer on the difference between ontology and modern physics--Heidegger always understands that his real opponent is the "dogmatic scepticism" that Hegel identified as the strange modern mixture of mathematics and materialism. Basic Concepts is best read once you have a good grounding in basic Heidegger: perhaps the second half of the Kant book and the Basic Problems of Phenomenology, then Being and Time, although reading the beginning of Husserl's Logical Investigations before tackling Being and Time would be a good idea. After that the Essence of Truth, where the relation of the whole to being and beings is treated, and then Basic Concepts would make sense, and perhaps the treatment of Plato to get a sense for what Heidegger thought had replaced the incipient thinking (the essay on Anaximander is just too difficult). It seems that by this point Heidegger no longer really had any students, that he is speaking for a general audience that is curious but not philosophically-trained. This lecture course, by the way, took place in 1941. Nazi-party member 3,294,586 is not in open opposition to the regime, but he cannot be mistaken for a supporter, either. And when are they going to run out of Heidegger pictures to put on the jacket covers?

A shortcut to Know Heidegger

Published by Thriftbooks.com User , 20 years ago
There is no easy way to read Heidegger because he is such a thinker and philosopher who has mediated the thoughts from the West and the East. To understand him, we should have the background of Phenomenology, Hellenistic philosophy, Christian thought, also Eastern mysterious thought. How can we handle those complicated ideas when reading this remarkable philosopher. Now it is! This book presents a very easy way to catch who he is, and what he thinks mainly. To know his basic concepts, to catch his mind.
Copyright © 2020 Thriftbooks.com Terms of Use | Privacy Policy | Do Not Sell My Personal Information | Accessibility Statement
ThriftBooks® and the ThriftBooks® logo are registered trademarks of Thrift Books Global, LLC