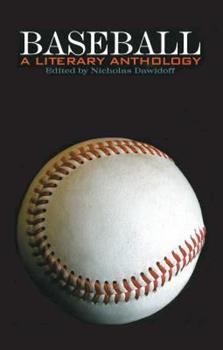 Baseball: A Literary Anthology: A Library of America Special Publication

Robert Frost never felt more at home in America than when watching baseball "be it in park or sand lot." Full of heroism and heartbreak, the most beloved of American sports is also the most poetic, and writers have been drawn to this sport as to no other. With Baseball: A Literary Anthology , The Library of America presents the story of the national adventure as revealed through the fascinating lens of the great American game. Philip Roth considers...

Published by Thriftbooks.com User , 19 years ago
When Ted Williams died a few months ago, someone described "Hub Fans Bid Kid Adieu," John Updike's chronicle of Williams' final game, as "the most perfect piece of sports writing ever." I looked for it in this collection, and there it was. When the baseball season ended last week (for us Mariners fans, anyway), another friend quoted Bart Giamatti's famous elegy that begins, "It breaks your heart. It is designed to break your heart." Like they say about the spaghetti sauce, "It's in there."More than any other sport, I think, baseball seems to inspire writing that's lyrical without being cheesy or cloying. That much is apparent in this collection, which also treats us to "Casey at the Bat" (naturally), Owen Johnston, Ring Lardner, Nelson Algren, Jimmy Breslin, Roger Angell, and much more (but, I observe without comment, no George Will). When my lovely bride gave me this collection back in June, I knew it would be a perfect companion for the season. Now I'm finding it an even better companion for the still young off-season. So as we try to figure out how many days are left until pitchers and catchers report to spring training, this great collection of fiction, non-fiction, poetry, and prose will carry us forward, and back, to summer.

Published by Thriftbooks.com User , 19 years ago
This book is the book to have if you once played, have been a fan of, or have fallen in love with the greatest game known to man--baseball. Some of the authors here surprised me (especially DeLillo). These pieces form a noble, moving whole (kind of stitched together--like a baseball). As is usual, the book (being a Library of America special edition) is sturdily built--built to last. Get this book.

This is a truly great read!

Published by Thriftbooks.com User , 19 years ago
Baseball: A Literary Anthology edited by Nicholas Dawidoff and published by The Library of America offers a lively mix of stories, memoirs, poems, news reports, and insider accounts about all aspects of the great American game, from its pastoral nineteenth-century beginnings to its apotheosis as the undisputed national pastime. Among the contributions are the works of Ring Lardner, Don DeLillo, sportswriters Damon Runyon & Red Smith, and poets William Carlos Williams & Yusef Komunyakaa. Included are essays and player profiles from John Updike, Gay Talese, Roger Angell, and David Remnick. Baseball: A Literary Anthology is a varied and exuberant display of what baseball has meant to American writers. Among the highlights: Philip Roth considers the terrible thrill of the adolescent centerfielder; Richard Ford listens to minor league baseball on the radio while driving cross-country; Amiri Baraka remembers the joy of watching the Newark Eagles play Negro League ball; Stephen King follows his son's team on their riveting journey toward a Little League championship. Bringing together tales of ambition and heartbreak, childlike wonder and implacable disappointment, raw strength and even rawer emotion, Baseball: A Literary Anthology tells a rich and vital story about the sport that has always been more than just a game in the hearts of Americans.In an age where venal, shorsighted men seem bent on destroying the game, reading this book gives one perspective: Such men have always existed--and failed. This stands, then, as a book of remembrance, reflection and hope. It's just what baseball-and baseball fans-need.This is a truly great read!

Published by Thriftbooks.com User , 19 years ago
In The Business of America, John Steele Gordon explains that, "Like all great team sports, baseball arose spontaneously from the human race's collective genius for play. Its ultimate origins lie in a game called rounders, played by village boys in England since time immemorial. Variations of rounders were known in both England and America by many other names, and one called baseball is even mentioned by Jane Austen in Northanger Abbey, written about 1798." Dawidoff has edited a literary anthology which, in my opinion, is the best single collection of writing about baseball as has yet been published. Even for long-time, passionate fans such as I, the fact many of the authors represented are unfamiliar adds even greater value to Dawidoff's 721-page anthology. That is to say, there are adventures of discovery in this superb collection...discoveries of voices perhaps not heard before as well as discoveries of situations previously unknown to most of us.Appropriately, the first selection is Thayer's "Casey at the Bat." I never weary of reading it or of hearing someone recite it. Corny? Of course. I hasten to add, Dawidoff also includes brilliant commentaries by those sports journalists most closely identified with baseball (e.g. Runyon, Lardner, Rice, Smith, Gallico, and Angell) as well as Satchell Paige's delightful selection, "Rules for Staying Young." As I think about this book, the word "feast" comes to mind; also the word "buffet." The authors offer a wide and deep combination of perspectives on what remains our national pastime. Although I am appalled by so much which is apparently essential to Major League Baseball today (especially greed and the inevitable victim of it, loyalty), I have not as yet lost my faith in the game's essential integrity. I still get goose bumps when I emerge from a walkway and first see the lush green field. Later, the crack of a bat, the roar of a crowd in response. Hot dogs, cold beer, popcorn and peanuts (if not Cracker Jack). The uniquely thrilling excitement of an inside-the-park home run, a triple play, a steal of home. Years ago, a graduate school professor of mine suggested that a myth is something that never was and always will be. That is my view of baseball in its purest forms, a view encouraged by this remarkable book.

Published by Thriftbooks.com User , 19 years ago
The Library of america,which has been publishing its wonderful series for over 20 years, has now added this colllection{, edited by Nicholas dawidoff,author of The Catcher was a spy:A biography of Moe berg}. Baseball anthologies are present by the truckload.What seperates this volume is its sheer inclusiveness;from the usual suspects John Updike on Ted Williams,Ernest Lawrence Thayer's casey at The bat,Roger kahn on the Boys of Summer, Roger angell on the 1975 epic world series to the unknown James Weldon Johnson on mysterious pitching as a young man,Jimmy Breslin from his hilarious book on the 1962 Mets, Can't Anybody Here Play This Game?,to Stephen King's lovely Head Down,the great midwetern novelist J.F. Powers is represented here, as is Red Smith,Jerome Holtzman, Damon Runyon,paul Gallico and Nelson Algren. There is a great piece by Molly O'neill,the former NY Times food critic on her brother Paul[late of the yankees]. there is even poetry,appropriately for a litery collection:Franklin P Adams with the second most famous baseball poem,{after Casey at the Bat]Baseballs sad lexicon, William Carlos williams has 2 poems, the crowd at the ball game, and 4Th of July doubleheader,Pulitzer prize winner Yusef Komunyakaa checks in with Glory,as does martin Espada with rain delay,toledo mudhens,july 8,1994. From Richard ford to Phillip Roth, bart Giamatti to the great Murray Kempton,there is something here for all tastes[except stastistic fans,this is a literary anthology.] Very well done, with the usual Library of america sewn binding and acid free paper. Superb and Hugely recommended!!!!!!!
Copyright © 2020 Thriftbooks.com Terms of Use | Privacy Policy | Do Not Sell My Personal Information | Accessibility Statement
ThriftBooks® and the ThriftBooks® logo are registered trademarks of Thrift Books Global, LLC