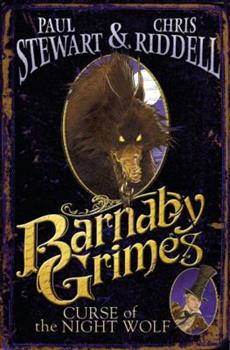 Curse of the Night Wolf

(Book #1 in the Barnaby Grimes Series)

by Paul Stewart and Chris Riddell

BARNABY GRIMES IS a tick-tock lad, running errands in his city, day and night, and "highstacking" around the rooftops in search of new mysteries to solve. In this first adventure, Barnaby is attacked one night by an enormous dog and soon finds himself swept up in a world of crooked doctors, poor and ill-advised patients, strange tonics, and very expensive furs. . . .

I doesn't get much better than this!

Published by Thriftbooks.com User , 13 years ago
I completely agree with the other reviewers. I was bowled over by this book. The writing is brilliantly transparent -- vivid and direct. The book picks you up and catapults you through Victorian London, in all its creepy glory, by the side of a daring and clever young hero. It was almost too creepy for me in some parts, especially in the first few pages, but it's when they get to that razor sharp edge of comfort (Neil Gaiman's "Coraline" comes to mind) that thrillers really shine. For a supernatural thriller, I defy anyone to beat Barnaby Grimes. (Not that I wouldn't love to see that, but you'd have your work cut out for you.)

Published by Thriftbooks.com User , 13 years ago
BARNABY GRIMES: CURSE OF THE NIGHT WOLF PAUL STEWART & CHRIS RIDDELL Middle Grade David Fickling Books Rating: 5 Enchantments BARNABY GRIMES: CURSE OF THE NIGHT WOLF hooks you from the start and doesn't let go. Barnaby Grimes is a 'tick-tock-lad', a sort of cross between a messenger and a delivery boy, but a tick-tock has to be faster than a messenger and twice as sharp as a delivery boy. But when 'Old Benjamin', a former coachman and friend of Barnaby's suddenly disappears without a trace, Barnaby finds himself wondering what happened to the old man. The trail leads to Dr. Cadwallader, a physician who's giving his cordial to the poor of London. It seems to work all right, all the clients Barnaby finds himself delivering letters to for the good doctor rave about the man and his potion. Yet Barnaby still isn't convinced. It all seems too good to be true. Is it? BARNABY GRIMES: CURSE OF THE NIGHT WOLF is a really enjoyable read. The level of detail makes you feel like you've stepped back in time to Old London and are highstacking right alongside Barnaby as he delivers the letters, fights off a wolf and travels to the seedier areas of London. Full of action, the pace is constant with barely a moment to catch your breath as the story moves at a brisk level. A definite must read for those who enjoy a boy-centric middle grade and those who enjoy the mix of mystery and historical. Look for the next book in the series, RETURN OF THE EMERALD SKULL to release February 2009. Paul Stewart is a highly regarded and award winning author of books for young readers. He lives in Brighton, England. Chris Riddell is an award winning illustrator and political cartoonist. He lives in Brighton, England. Lisa Enchanting Reviews September 2008

Published by Thriftbooks.com User , 14 years ago
It's About: A Victorian-era tick-tock lad named Barnaby Grimes, who- in the course of delivering messages as one of the few surviving highstacking couriers in London- uncovers a philanthropic doctor's fiendish secret. I have to tell you guys, I loved this book. I loved it like crazy. I finished it in one sitting, and seriously had to restrain myself from getting up to write the review just then. I intended to wait until my son- who is enduring Marching Band camp right now- could read it, but I just couldn't. Seriously, I love this book. The language is challenging- both in reading level (herpetological, confidentiality, paramount,) but also in setting the era scene (medicaments, drayman, mudlarks.) But the beautiful thing is, the language is challenging in a way that it's exciting to read. Stewart and Riddell have brilliantly captured the breathless excitement of pulp novels and penny dreadfuls. This book is full of brightly drawn characters, from Old Benjamin the coachman, to Henrietta the Landlady, who used to be the circus' Painted Lady; I especially enjoyed the wacky doctor PB, who hires Barnaby to spy on bullfinches, believing they may actually be vicious carnivores. Barnaby himself has exactly the right mix of invincibility and humanity to make a great pulp hero. Anyone who knows how the old horror serials go can guess by the title the contents of the plot, but young readers especially, will love both how vivid the horror sequences are, and how much fun the action sequences are. The illustrations are pitch perfect, very Charles Gibson meets Edward Gorey, and the text is peppered with teases of other adventures that I look forward to reading about in future installments. Would I Give This Book to a Kid: I plan to give this book to *several* kids, and a handful of teenagers. Would I Give This Book to an Adult: Absolutely; I think my husband and my stepfather particularly will enjoy it.

Published by Thriftbooks.com User , 14 years ago
Barnaby Grimes is a tock-tock lad. He'll deliver any message for any client, anywhere, anytime. He's the fastest messenger around and he'll even climb on rooftops to deliver his messages on time. One night, while Barnaby is traveling by rooftop, he is attacked by a huge wolf-like beast. When Barnaby's friend, Old Benjamin, disappears, Barnaby suspects the wolf had something to do with it and sets out to discover the truth, meeting a cast of strange characters along the way. CURSE OF THE NIGHT WOLF is the first in the new BARNABY GRIMES series from the authors of THE EDGE CHRONICLES. The story combines mystery, history, horror, action-adventure, and the paranormal into a perfectly scary story for tweens. The black and white drawings add a chilling effect to the story. The characters are brilliantly drawn and the villain is perfectly evil. Barnaby's story will continue in RETURN OF THE EMERALD SKULL, and from the preview in my copy of CURSE OF THE NIGHT WOLF, his adventures are going to get much scarier! Reviewed by: Sarah Bean the Green Bean Teen Queen
Trustpilot
Copyright © 2022 Thriftbooks.com Terms of Use | Privacy Policy | Do Not Sell or Share My Personal Information | Accessibility Statement
ThriftBooks® and the ThriftBooks® logo are registered trademarks of Thrift Books Global, LLC