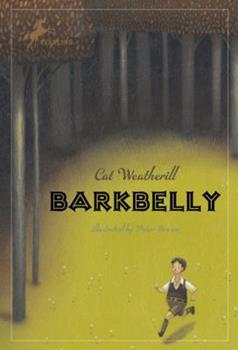 One silver-starry night, a shiny, wooden egg falls from a flying machine high in the air . . . down, down, down through the midnight sky . . . down to the small village of Pumbleditch, where Barkbelly... This description may be from another edition of this product.

Published by Thriftbooks.com User , 15 years ago
Cat Weatherhill's BARKBELLY tells of a wooden boy, an accident, and a race for his life which leads Barkbelly into confrontation with a circus, a pirate ship, and more. The world is filled with dangers for a wooden boy - but his dreams may ultimately rescue him in this engaging tale.

Truth is a snail

Published by Thriftbooks.com User , 15 years ago
Everything old is new again. In this day and age authors aren't afraid to revitalize old story ideas. They aren't afraid to face critics who may pooh-pooh their efforts for being overly familiar. Such a critic was I when I picked up "Barkbelly" for the first time. Being the shallow cad that I am, I was drawn to its cover. Illustrator Peter Brown's mesmerizing image of a boy running for his life had a kind of "Jimmy Corrign" Chris Ware look to it. Later, when I had it at home, I glanced at the plot summary. The words "wooden boy" popped right out at me. Uh-oh, think I. Wooden boy? Have I just grabbed myself a Pinocchio rip-off? Further scanning of the summary without actually reading it(I like plots to surprise me) and the words "shiny wooden egg" also caught my attention. Uh-oh, think I. Eggs? Not Pinocchio then but potentially something equally odd. So with a mind fully prejudiced to dislike this book based on four words I dove headfirst into the novel. Let that be a lesson to you, my children. No matter how odd a book may sound, if it's well-written enough it'll trump even the best founded of prejudices. My prejudices were on remarkably shaky ground to begin with, so it didn't take long for Cat Weatherill to win me over. Yes, it is about a wooden boy who comes from a wooden egg. It is also a rousing quest tale and a great story about facing up to your past and finding people (both good and bad) in the world. A wooden egg falls from a flying machine down down down to the earth below. It lands in a field where it waits. When the harvesting of that same field begins, the egg happens to bean one Gable Gantry upside the head. The man isn't hurt particularly but the owner of the field wants nothing to do with the object, so Gable takes it home to his wife. She cleans it off and displays it in the window until, on one particularly cold night, the two decide to toss it on the fire. In a flash and a bang the egg suddenly bursts from the fire, grows arms and legs and a head, and is a small screaming infant. The childless couple is delighted and name the wooden baby Barkbelly. Barkbelly, however, grows at an inconceivable rate. By the end of the month he's the size of a ten-year-old boy. The village accepts him readily enough but when the boy is involved in an unfortunate game of Bull Run with another boy he finds himself fleeing the village for his life. Now Barkbelly is on an adventure like no other. He works in a factory making jam, joins the circus, is captured by pirates, and finally discovers the truth behind other wooden people like himself. The question is what is he going to do with this knowledge, now that he's found it? The book gets off to a slow start. It isn't until page 73, actually, that you hit the incident that makes Barkbelly run. But that isn't to say that what comes before isn't necessary. The real point of this book is that freedom, for all its disadvantages, is the right of every living creatur

Published by Thriftbooks.com User , 16 years ago
My daughter (aged nine) and I read this together and both loved it. In fact we are counting down the days until March 2006 when Cat Weatherill's next book is published. A wonderful blend of adventure, fantasy, history and emotion, with beautiful language and imagery throughout.
Copyright © 2022 Thriftbooks.com Terms of Use | Privacy Policy | Do Not Sell My Personal Information | Accessibility Statement
ThriftBooks® and the ThriftBooks® logo are registered trademarks of Thrift Books Global, LLC