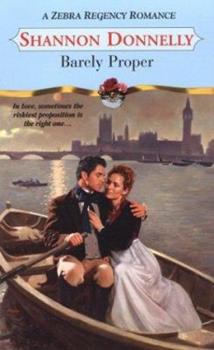 (Book #3 in the Proper Series Series)

Accused of murdering a jealous husband who had challenged him to duel, the dashing Terrance Winslow sets out to clear his name--and loses his heart when he least expects it. Original.

4.5 stars - Barely Proper Not to Read this Book!

Published by Thriftbooks.com User , 14 years ago
I found Barely Proper to be a fun-filled romp of levity! Sylvain was a marvelous heroine to the wonderfully rakish Terrance. I had expected this book to be slightly more serious and was plesantly surprised at the wit and humor. Besides the lovely romance, Barely Proper had a nice mystery plot with many terrific characters (including Trace), with none as the villain, unless you count the dead man of course, was practically perfect, and was a pure delight to read. It looks as though Sylvain's sisters have had their own books, as well as Terrance's brother, so I'll have to check and see because I will definitely read more from Shannon Donnelly. :)

Published by Thriftbooks.com User , 18 years ago
Here's what I enjoy most about Regency romances written by Shannon Donnelly: she always takes the time to develop her characters, their relationships and the various settings. And with "Barely Proper" these three strengths melds together to give a somewhat much used plot premise a wonderful new lease on life.Terence Winslow has always been a scapegrace, in and out of trouble either because of his gambling or his womanizing. So it should have come as no surprise to him that he's now been challenged to a duel by Lord Dunscombe for his affair with Lady Dunscombe. Except that when he arrives at the agreed upon spot, he finds that Dunscombe's been shot in the back. The next thing he knows, Terence is facing a charge of murder. Unable to believe his infernal luck, Terence knows that he has to somehow discover who really murdered Dunscombe before charges are formally placed against him. Fortunately for him, his neighbour and friend, Sylvain, is at hand, willing to help. Sylvain knows full well exactly what Terence is capable of, and shooting someone in the back is definitely not one of them. And she's determined to help Terence clear his name. But Sylvain has also long nursed a secret love for her neighbour. And she cannot help but fear what will happen if Terence guesses her secret..."Barely Proper" rounds off the trilogy that focuses on the Harwood sisters and the Winslow brothers. All three novels feature stories that are not really startlingly new; on the other hand all three novels make for worthwhile reading because of the manner in which Shannon Donnelly tells her tales. In "Proper Conduct" the manner in which the authour draws into the shabby genteel world of the three Harwood sisters who are on the verge of spinsterhood because of their father's folly -- the relationship between the sisters and how each sister's character has been shaped by their circumstances -- was what made reading "Proper Conduct" such fun. Ms Donnelly did the same with "Proper Mistress" -- only this time she drew us into the world of the Winslow brothers, showing us how life with a perpetually angry and judgemental father had made the two brothers rather wild, and how the younger Winslow brother (Theo) is able to change thanks to love and acceptance of his "improper" fiancee. With "Barely Proper" she does for Terence what she did for Theo in "Proper Mistress" -- allowing for Terence to redeem his character and to become to individual he was meant to be. Discovering who the actual murderer was and exonerating himself of the murder charge was only incidental to the main focus of this novel which was all about how Sylvain and Terence act on the feelings they have for each other and how Terence changes most of his scapegrace ways. With an intelligent story, engaging characters and a good prose style, "Barely Proper" turned out to be a truly enjoyable read.
Copyright © 2020 Thriftbooks.com Terms of Use | Privacy Policy | Do Not Sell My Personal Information | Accessibility Statement
ThriftBooks® and the ThriftBooks® logo are registered trademarks of Thrift Books Global, LLC