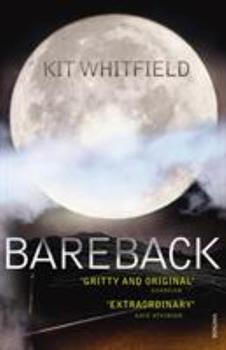 "A fascinating and unique tale in an alternate reality where being human is a hindrance. Kit Whitfield has created an astonishing read."--Sherrilyn Kenyon, author of the Dark-Hunter series It is a... This description may be from another edition of this product.

Published by Thriftbooks.com User , 15 years ago
This story was a surprisingly strong draw for me. I'm always interested when somebody looks at a given social issue with a different pair of eyes, and this did not disappoint. In the world Kit creates in Benighted, the majority of the population consists of Werewolves - referred to as Lunes. The thing is, they go crazy when they fur up and a very small subset of society that is unable to 'wolf out', referred to as barebacks, have to police the Lunes that get out on moon nights to keep the wolves from raging and destroying everything. Lune citizens legally have to lock themselves down every moon night, and the 'barebacks' at DORLA (the Department for the Ongoing Regulation of Lycanthropic Activity) patrol the streets, 'dogcatching' and arresting the people that find themselves without a place to keep them penned in. Kit's writing style is very emotive and strong, and she really draws you into the scenario that unfolds - from the bareback point of view. There's a good amount of angst and intrigue throughout, and the interpersonal dramas that play out are fascinating. I really enjoyed this book and highly recommend it.

Published by Thriftbooks.com User , 15 years ago
Kit Whitfield's Benighted is an excellent book that, as the author indicates, defies being stuffed into the pigeon-hole of horror or fantasy or science fiction. It is also a love story, dis-uptopia, detective story and social commentary. In fact, as the author says, it is ultimately a "novel." The tale (yes, it's also a tale) is about Lola May Galley, a hunter ("dogcatcher") of prowling lycos (werewolves who are not self-confined during a full moon at night). Lola is also a detective and a lawyer. In this society, the non-lyco Lola belongs to a minority underclass that provides essential services to the lycos who are privileged by law, tradition and the economy. Lola tracks the murderers of her colleague Johnny Marcos and of her best friend's son, Nate. During this quest, she falls in love, against her better judgment, with lyco social worker Paul Kelsey and her life is at risk when a murderous lune Darryl Seligmann escapes from confinement in a hospital. The trail Lola follows leads her, not only to the solution of the crimes, but also to a legal and moral chasm in the stratified society depicted in the novel. What I most enjoyed was the counterpoint between the suspense of the chase ("dogcatching" in dark parks) and the sweet and playful moments between Lola and her lover Paul as well as Lola and her nephew Leo. I also liked the eerie images of lunes, such as when Lola watches Paul "furring up" or when Lola has dreams of being a lune and recalls how lune bodies are beautiful in their form and movement. You also get a sense of the freedom there would be to be inside their skin. Whitfield does not pound us over the head with an academic history of lycanthropy but she does inform her novel with just enough history to add a touch of depth and reality and, sometimes, lyricism, e.g. "Paul says that in Middle English there was a word meaning moonlight bright enough to see by . . . a silver fish glinting through the water was loten, a lovely melancholy girl had loten eyes." Lola herself is a complex character, no angel for sure, but she has a depth that seizes and sustains the reader's interest throughout the novel. Although she remembers (and sometimes rebels against) the things her mother taught her, she has had a horror-filled youth in the institution where young non-lycos are held (the "creches"). She has emerged hard-nosed and unpredictable but she is a survivor for all that, effective in her work. When we see her devoting herself to child play with her nephew and in her relationship with Paul, we realize that a spark of joy has been preserved, despite all the physical and societal abuse that has been directed at her. Somewhat as in Brave New World and 1984 the resolution of the novel points to a profound flaw in both the alternate reality created by the author and in the broader modern society in which we live. This, too, is not driven home by a sledge hammer but is portrayed more subtly through the actions of Lola a

A Literate Thrilled with Teeth

Published by Thriftbooks.com User , 15 years ago
If this is literature, then its more exciting than I'm used to; and if its a thriller, then its one of the best-written books in the genre that I've come across in a while. In Benighted, Kit Whitfield gives us a whole new world, a world that emerges fully formed from the author's imagination. Whitfield has clearly spent a lot of time getting to grips with the world she has created, thinking through the intricacies of how our own world can be so plausibly turned inside out. The mythology and the science and the prejudice are all packed tight together and seep into the reader slowly, wonderfully - leaving you ready, by the end of the book, to see what other adventures this world can hold.

Much More Than A Werewolf Book

Published by Thriftbooks.com User , 15 years ago
This story is about a world where 99% of the population are werewolves (although the word is never used in the story). The other 1% are regular humans. However, with such a small percentage of the population, they're very much considered and treated as a minority, and feel that every moment of their lives. The story is about a woman who works in the human branch of government, which is primarily responsible for making sure the werewolves don't cause utter havoc during the full moon, and has been given quite a bit of power to assure that doesn't happen. When two humans are shot with silver bullets, she undertakes to discover who did it, and ends up in a surprising and personally devastating place. I was surprised by the depth of characterization and world building in this story. I admit I was expecting another slightly shallow werewolf action story. That's not what this is, but I certainly wasn't disappointed. Rather, I found myself emotionally involved in the characters and the love story to a degree I always hope to achieve when I read a book, but rarely attain. So, cheers to the author for writing a great book. I can only hope the already being planned movie can live up to the story as written.

An excellent novel with werewolves

Published by Thriftbooks.com User , 15 years ago
(as opposed to a "werewolf novel"): this is a beautifully written novel with the structure and mood of female-narrated neo-noir. Highly recommended, but with the caveat that it's less like Laurell K. Hamilton's Anita Blake books than like Colson Whitehead's The Intuitionist or Richard Paul Russo's dystopian near-future San Francisco. Dark, disturbing and an extremely satisfying read.
Trustpilot
Copyright © 2022 Thriftbooks.com Terms of Use | Privacy Policy | Do Not Sell My Personal Information | Accessibility Statement
ThriftBooks® and the ThriftBooks® logo are registered trademarks of Thrift Books Global, LLC