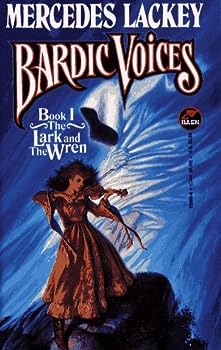 The Lark and the Wren (Bardic Voices, Book 1)

(Book #1 in the Bardic Voices Series)

Young, brash, and impulsive, Rune backs up a brag by ascending Skull Hill to play fiddle for the malevolent spirit that resides there, striking a bargain with the ghost to surrender her soul if he... This description may be from another edition of this product.

Unforgivable condition, broke the second I flipped the page.

Published by Giovani , 1 year ago
I prefer used books over new books for a bunch of different reasons, cost, reduced consumption and environmental harm, and I don’t mind things being a little worn in, even scribbles in the margins are endearing to me not a distraction. However when a book is in such poor condition that the pages are falling out and the glue binding it together snaps as you turn the page I can’t forgive it. This book is in 4 different pieces and I’m not even half way down with it. I can’t believe I spent money on something that won’t even survive one reading let alone be loved for years to come. The story however, top notch. I always love Mercedes Lackey.

Published by Thriftbooks.com User , 18 years ago
Rune was a self-taught musician who had great dreams. She wanted to be famous and play for the wealthiest men in the land who would shower her with riches and treat her like a queen. Too bad she was stuck in the middle of nowhere working in a run down tavern with her slutty mother making a play for the newly widowed owner. Rune was born out of wedlock and had no future in the village, but was content to stay and work hard at the inn to keep a roof over her head and a full belly. That is, she was content until the boys in the village tried to rape her and made it perfectly clear that she was just like her mother. Rune didn't know what to do, but, when she was caught in the middle of her grand boasts to Jib, her only friend, she felt that she had to follow up with her claims and determined to go and fiddle for the Skull Hill Ghost - and survive! Much to Rune's surprise, she did survive and the ghost even gave her a bag of silver to start her on her way. Rune couldn't be gone fast enough and immediately set out for the nearest city where she could get some training and learn how to read and write music. She was lucky enough to find Tonno, a great music lover who could never make it as a professional musician and a job playing music in the common room of Amber's, a high class whore house. Rune learned much more than music from Tonno and much more than the ways of men and women from Amber. By the time she was ready to leave to try out for the Bardic Guild, Rune was much more aware of what was going on around her and was determined to find a place for herself. Unfortunately, Rune was not quite as smart as she thought she was. When the judges of the Bardic Guild competition discovered that she was a girl, they broke her instruments and her arm and left her in the mud. The Free Bards, led by Master Wren or Talaysen as his friends call him, took her in and taught her that you didn't have to belong to the Guild to be a great musician and to write good songs. Rune desperately wanted to learn and enjoyed her lessons with Master Wren, quickly gaining the nickname Lady Lark, and fitting into the Free Bards with ease. Now if only she could convince Talaysen that she saw him as more than a teacher... I thoroughly enjoyed this book. I didn't think that it was slow, as some other reviewers, but that it was really two books in one. It was like it was one story up until Rune tried out for the Bardic Guild and then another one altogether when she took up with the Free Bards, but, hey, two books for the price of one so I'm not complaining. I don't think that this is Mercedes Lackey's best book, but I definitely think its up there. Rune is a very likeable character who makes mistakes and has doubts as to her self worth, just as we all do, but continues to go forward and try to make her life better. All of the characters were fun and very individual and I think that Lackey has created a wonderful new world for us to explore.

This book is great!

Published by Thriftbooks.com User , 22 years ago
I really liked this book. It's about Rune, who wants to join the Bardic Guild. She goes through a lot of hardships in her quest to become good enough, and to get to the trials.

A great book for music lovers!

Published by Thriftbooks.com User , 22 years ago
I've read this book three times. I play the guitar so it was interesting how it tyes in with my life. I couldn't put it down. It makes you wonder what you would do if you were Rune and if you would make it into the bardic guild.

An incredible story from the view of an amazing character

Published by Thriftbooks.com User , 22 years ago
The first of the Bardic Voices series, Lark and the Wren is impossible to put down, an original story that grips your emotions as Rune struggles to begin a new life for herself away from her past and towards her future. She must realize her potential and what she wants from life as she begins again in new places with new people and new goals. Mercedes Lackey is brilliant, creating a realistic character whose emotions become our own as you follow her adventures in her search for a new life following her passion of music. This book was inspirational and unforgetable.

Published by Thriftbooks.com User , 23 years ago
I loved it!! I thought the characters were very real and the book didn't ramble on at all. I loved how she tied this book in with all the other books in this series. One of Mercedes Lackey's best!
Trustpilot
Copyright © 2022 Thriftbooks.com Terms of Use | Privacy Policy | Do Not Sell My Personal Information | Accessibility Statement
ThriftBooks® and the ThriftBooks® logo are registered trademarks of Thrift Books Global, LLC