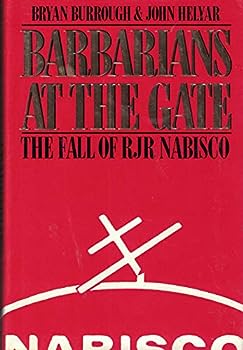 Barbarians at the Gate: The Fall of RJR Nabisco

by Bryan Burrough and John Helyar

"One of the finest, most compelling accounts of what happened to corporate America and Wall Street in the 1980's." --New York Times Book ReviewA #1 New York Times bestseller and arguably the best... This description may be from another edition of this product.

One of the Best of the Subject

Published by Thriftbooks.com User , 20 years ago
This book is a description of the largest leveraged-buy out of the 80's. The book covers the management buy out of RJR and all the financial moves that took place to get it done. It covers the winners and losers and the tactics they used. The authors are investigative reports so they have the ability to provide the reader with a very well constructed and easy to understand story. They really bring the reader into the negotiations and all the high pressure and tension is coved to the reader. The most fun was when the authors took to describing all the financial players involved, their egos and ways of life and doing business. The excesses of some of the companies detailed are really something. If you are interested in this topic then I would suggest you also read "Den of Thieves" and "Predator's Ball", both of which cover the 80's M & A and Junk Bond world. To get a better understanding of KKR, I would suggest "Masters of Debit" and if you are looking for more info on this particular deal I would suggest "True Greed".

Published by Thriftbooks.com User , 21 years ago
"Barbarians at the Gate" is a very easy, fun read. It is purposefully written alot like a novel. For one thing, the book shifts frequently between different times and places. For instance, the prologue details the board meeting where CEO Ross Johnson proposes a Leveraged Buy Out (LBO) for the first time. The start of chapter 7, page 184, then picks up from there chronologically, "Johnson rose early the next morning, the memory of Wednesday night's board meeting still fresh in his mind" (pg 184). Also like a novel, the authors give a tremendous amount of background and personal history on the people and companies involved in the deal. There is history about Ross Johnson's personal history, about his time at Standard Brands and Nabisco before the merger with RJR, and then about RJR the company, dating back to the 1800s. There is also a chapter that goes into some detail about KKR and Henry Kravis. All of the information was interesting and well written, though I felt at times like I just wanted to get back to the main plot and away from some of these tangenital details. It was a choice the authors made between making the book more journalistic and conise or more like a novel, and I guess I ended up liking their choice. The heart of the book is the bidding battle for RJR between KKR and the Shearson Lehman Group (which had Johnson on their side); First Boston also makes a bid but I don't think their bid was ever seriously, seriously considered. The authors describe an LBO as follows, "A firm such as Kohlberg Kravis, working with a company's management, buys the company using money raised from BANKS and the PUBLIC SALE OF SECURITIES; the DEBT IS PAID DOWN WITH CASH FROM THE COMPANY'S OPERATIONS and, often, by SELLING PIECES OF THE BUSINESS" (pg 101). So that is how KKR and the LBOs work. The book takes you through the day by day strategy sessions of the different groups, their attempts to raise financing (equity from private investors, junk bonds issued by the investment banks, and commercial bank loans), their responses to moves from the other side, the meetings of the Special Comittee which would decide which bid to accept, etc.... There are alot of late nights, alot of re-crunching the numbers, alot of personality clashes, lawyers, investment bankers, and more. The writing was so good that it made me feel like I was there, following the deal step by step, and gaining an understanding of what the various parties do and what goes on in an LBO. It was like reading a story and learning about LBOs and how big deals get made at the same time. Very rewarding. I usually don't like books to be this long (515 pgs) but in this case I think almost every pages was worth it. Greg Feirman

Published by Thriftbooks.com User , 21 years ago
The dot-com stock market insanity of 1999, followed by the dot-bomb fall in 2000, is eerily mirrored in this book from a decade earlier about big money, big egos, and raging insanity.Burroughs and Helyar tell the story of the leveraged buyout of RJR Nabisco in gripping fashion, showing how greed and shortsightedness contributed to the biggest and worst-managed corporate takeover in history. The players: Salesman F. Ross Johnson of RJR vs. Henry Kravitz of KKR. Everything from a wild, rip-roaring potboiler novel is here: Secret deals, stock market manipulation, flouting of laws, surprise plot twists. All of it almost unbelievable, but all of it true.The next time you wonder about how people could have been taken in by internet companies with insane stock prices who blew through venture capital as if it were funny money, read this book. It's well worth your time, effort, and energy.

Giant Egos Clash at the Top

Published by Thriftbooks.com User , 22 years ago
I am a management consultant who works with companies that are interested in improving stock price, and I know many of the more humble people portrayed in BARBARIANS AT THE GATE. I would like to put this book into perspective for you. 20 years ago our firm did a survey of CEOs and found that 99 percent felt that trying to improve stock price was unethical and immoral, and involved doing manipulative things. After the takeover wars of the 1980s, most CEOs believed that improving stock price was an important task and could be done in an ethical way. There is nothing more disruptive to a company than to go through a hostile takeover, whether the bid succeeds or not. Raw greed and lust for power hold sway at such times, and many people will pay the price for having attracted the sharks into their swimming pool. Prior to the RJR Nabisco purchase by KKR, many large companies felt safe because of their size. They were suffering from "stalled" thinking, because it was widely believed that a deal of this sort could not be financed with debt at the time the takeover occurred. That was wrong: For a price, the money is always there. For those who have not been in these bruising ego battles, what you will not realize is that these contests are a lot like those you will remember from grade school on the playground when the teachers were not around. Bullying, threats, and naked power carry the day in a lot of situations. But because this is about ego, a lot of mistakes are made. RJR Nabisco continued to strain under mountains of debt for years, even after lots of refinancings because of the LBO. KKR's track record looks a lot different now than it did before buying RJR Nabisco. A lot of the fever behind the LBO's is gone, for now. Bring back a bear market for a few years, and this whole phenomena will recur. Some smart lawyer will find a way around the defenses that so many rely on for now. The only ultimate defense against the circling sharks is to have a high-priced multiple stock. That is the only timeless lesson for companies. If you are wondering how accurate this book is, it is more right than wrong. The authors did, however, miss some of the most intriguing ironies of the situation. Perhaps someday, someone with inside knowledge will write the sequel or unveil the whole, delicious irony. That should be a great story that will outsell GONE WITH THE WIND.With the benefit of this context, I do recommend you read the book. You'll find it stranger than fiction in many ways, and very exciting to watch. The authors have captured the emotion of the moment very well. It's a whale of a story.
Trustpilot
Copyright © 2022 Thriftbooks.com Terms of Use | Privacy Policy | Do Not Sell My Personal Information | Cookie Preferences | Accessibility Statement
ThriftBooks® and the ThriftBooks® logo are registered trademarks of Thrift Books Global, LLC