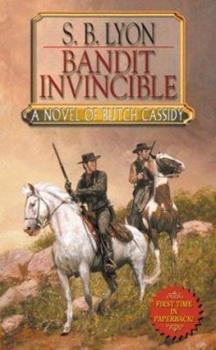 Beyond the legend of Butch Cassidy lies a complex and mysterious man, brought to life in this Western saga.

A great book and great author

Published by Thriftbooks.com User , 18 years ago
Bandit Invincible by Suzanne Lyon is a book worth looking in to. Lyon brings the world of Butch Cassidy and his adventures to the reader in a great form. I enjoied the book and here other titles, all worth reading. I would totally recomend this book to any serious western fan or a first time reader.

Published by Thriftbooks.com User , 21 years ago
For many, the name Butch Cassidy conjures up visions of a ruthless, violent man, but BANDIT INVINCIBLE:BUTCH CASSIDY by Suzanne Lyon shows another view of this legendary outlaw. Lyon's in-depth characterization of Butch Cassidy depicts a man, who, despite his later reputation as a desperate outlaw, had many loyal friends who considered him a fair and generous man. Most of this entertaining novel is a flashback to Cassidy's younger years on his parents' dirt-poor farm. Following a talent for horse handling, he gains a reputation as an expert horse trainer and handler. Leaving home under a cloud of suspicion, he takes on as many names as he does occupations, finally ending up as Butch Cassidy,leader of the notorious Wild Bunch. Along the way, we learn of the many sides to this colorful legend of the old west. Preferring the outdoors, cheerfully accepting wilderness hardships over indoor confinement, he becomes an expert at survival. Yet,when around people, he handles himself with charm and wit, a natural leader who can easily turn a life-threatening situation into a joke. Women love him but his reputation always seems to catch up with him, forcing him to leave a trail of swooning hearts. BANDIT INVINCIBLE:BUTCH CASSIDY is a well-researched novel with broad appeal. Lyon's descriptions of the people and places of the times are superb. Reading this novel left me feeling I now knew the man behind the legend.
Trustpilot
Copyright © 2022 Thriftbooks.com Terms of Use | Privacy Policy | Do Not Sell My Personal Information | Accessibility Statement
ThriftBooks® and the ThriftBooks® logo are registered trademarks of Thrift Books Global, LLC