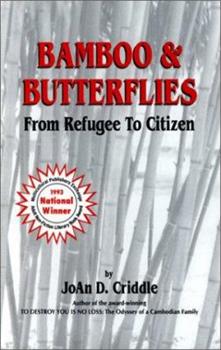 Bamboo and Butterflies: From Refugee to Citizen

Bamboo & Butterflies is the true story of a Cambodian family's odyssey to America and the challenges and obstacles they encounter in their struggle to assimilate. After suffering hardship and... This description may be from another edition of this product.

Published by Thriftbooks.com User , 19 years ago
I teach English to immigrants and their stories of immigration always fascinate me. The extended family in this biography is from Cambodia, and they were desperate to leave, as families such as this one were especially at risk of persecution and death for having been part of the more Ã'privilegedÃ" middle class.It took a massive effort on the part of Ean BunÃ*s family to escape, but it also required great effort and commitment on the part of the American sponsors who persevered in not only getting them here, but in nurturing them once they arrived. Without the sponsors, these immigrants wouldnÃ*t have adapted to the culture and reached their dreams, at least not as quickly or as well. The sponsors provided housing, furniture, clothes. They helped them sign up for classes and find jobs, and counseled them on taxes, education, jobs, and even in dealing with problems in relationships. The sponsors played a critical role in Americanizing these immigrants, and serve as a model for those who wonder how they can help.This is a fascinating account of Ã'east meets westÃ", with humorous and poignant stories of how members of the family interpreted our western holidays such as Christmas, Easter, and Halloween, their misundersandings of our idioms, and encountering contraptions such as toilets and toilet paper so soft it should not be used for its intended purpose. When the American sponsors spent time instructing the family in Christianity, they assumed the familyÃ*s conversion was real, based on an understanding of the doctrine, but much later discovered that the Cambodians attended church to please their sponsors, and to mingle with people who spoke English. The Cambodians considered themselves both Christians and Buddhists at the same time, and after years of acquiring English and cultural understanding, they realized they didnÃ*t understand either religion very well.This book also makes us see a little of what we take for granted in the U.S., our ability to speak freely, to live comfortably and without fear, and to be surrounded by a wealth of possessions. One Cambodian is shocked and outraged, when attending school, she sees the students talking loudly, throwing a football across the room, and the worst horror... sitting on a stack of books and treating them like trash. She had owned one book in Cambodia, and protected it as a special treasure. She saw how American students didnÃ*t seem to want to learn as much as they wanted the school day to end, whereas she wanted to devour her education, learning as much as she could. Yet there are ways that our culture shines in the CambodiansÃ* eyes, and if we take some time to look at our culture from their perspective, it can make us more thoughtful, more appreciative, and more productive citizens.

Published by Thriftbooks.com User , 23 years ago
"Bamboo and Butterflies" is a biography and an oral history. In a series of vignettes written in "first person" format, it tells the story of the daughters and extended family of Ean Bun, and their fleeing from Cambodia to America. Part one of the story begins in 1979 with 11 year old Tevi. She tells of her memories about the flight out of Cambodia to California with her mother, Mearadey Ngak, her father, Keang (Ken) Ngak, and her two younger sisters, Sampwa Moni (Sam) and Chenda Peach.Tevi relates that "Everything seemed alien: unfamiliar surroundings, weird noises, peculiar smells." The narrative frequently switches back and forth between these first family members to arrive in The States.The narrative also frequently changes the frame of reference back and forth from the present to the past. There is some repetition from story story, but the format works well. All of the family share their relief at finally being safe after several years of slave labor under the Khmer Rouge regime. Sampwa/Sam relates "...I learned fear. Being forced from our home and from the city was a shock...then the Khmer Rouge took my grandfather away." They all tell of the problems involved in being forced to take refuge in a country without knowing the language. There are humorous tales of the misconceptions they have about American culture and society. When Chenda Poong first arrives in the States she can't figure out how to stand on an American toilet to "perform her duty." After several days of doing the best she can, she mentions it to her cousin, who explains the "American way" to her. "My opinion of American bathrooms improvedmarkedly after that" she said! There are many stories of triumphs small and large. As new family members are brought over from Southeast Asia their stories are added.We eventually meet all of Ean Bun's daughters and Son-in-Laws and grandchildren. The courage and tenacity with which all the members of this exceptional extended family work is told with a humble "matter-of fact-ness."! They are not bitter at the past, they are grateful to be alive and have a second chance! Forced to clean houses to make ends meet, A task they had servants for in Cambodia, the women confront the "fantasy versus the reality" of their new lives. "That cleaning business proved to be a valuable experience. It taught me that in America your worth is measured by the person you are, not the work you do." "The gap you perceive between your experience and ours (refugees) is not a gap - it's the Grand Canyon," Teeda Mam says at one point. But they are not hopelessly distressed about the gap they must cross to fit in in America, they are motivated! This families' experiences are extreme by our standards; and so is the courage and goodwill with which they chose to cope.
Copyright © 2022 Thriftbooks.com Terms of Use | Privacy Policy | Do Not Sell My Personal Information | Accessibility Statement
ThriftBooks® and the ThriftBooks® logo are registered trademarks of Thrift Books Global, LLC