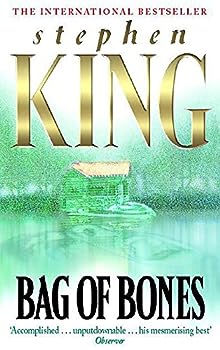 This description may be from another edition of this product. Set in the fictional town of Castle Rock, Maine From #1 New York Times bestselling author Stephen King, a powerful tale of grief, of love's enduring bonds, and the haunting secrets of the past. Set in...

Published by Thriftbooks.com User , 4 years ago
I had never read Stephen king until this, and it is my absolute favorite. I always come back to this one. It is enthralling and not traditional king.

Published by Thriftbooks.com User , 12 years ago
The first real ghost story King has written, it is a welcome deviation from his usual style of writing, and I have always enjoyed and appreciated King's work. Richly drawn characters, surprising villains, and haunting landscapes make this book a necessity for all King fans. King's ability to create a larger meaning with metaphors of water and social impact is fascinating, and his use of literary references to underscore the mysterious lake house setting were captivating. After I finished this book I immediately picked up Du Maurier's Rebecca, which I also thoroughly enjoyed. King has really outdone himself with this one.

Published by Thriftbooks.com User , 13 years ago
I am enjoying what I think is perhaps Stephen King's best novel, ever. The opinion on Stephen King's best work differs depending on who you talk to; but for me, it will always be Bag of Bones. It's the one novel of Kings that I've read more than any other (nine times) and each time it's just as wonderful and beautiful and engaging as it was the first time I opened up my hardcover copy ten years ago. I think it was the beginning of King moving away from horror and toward a more literary style of writing. Hearts in Atlantis, Lisey's Story and Duma Key (his most literary works) would come later, but Bag of Bones was the beginning of something, the capturing of time in the pages of a book. I remember when I first read Stephen King's Bag of Bones. I was on welfare at the time and living in a boarding house with nine other people. It was this big sprawling Victorian house that still had the servants quarters in the attic and the servants stairs to the kitchen. I remember going to the bookstore early in the morning and spending more money than I had on the book. Even though it was fall, I sat outside on the front porch of the big old house and opened my book to the first page. I remember smoking cigarettes and drinking coffee; but I don't remember much else except the words. It was the words, the language that transported me. I had thought that I was going to read a story of a writer haunted by ghosts. In a sense, that's what the book was about. But in reality, Bag of Bones was and is about a man haunted by himself, haunted by the past. It was the most beautiful book by King that I had ever read. I felt for and ached for Mike Noonan, newly widowed writer of thriller novels. Newly struggling with a writers block so intense that he could not write a word. I remember thinking when I brought that book home that it was so big, that it was huge. That it would take me forever to finish it (and thus worth the fourty some dollars I had spent on it). The book lasted me three days. Three glorious days where I was held spellbound, enraptured, in rapture. Bag of Bones for me was more than a novel. It was a gift. While reading Bag of Bones, I realized that I wanted to be a writer. I wanted to see if I could write something as good as Bag of Boens. I'm still trying. That hardcover copy was lent out, only to be lent out to someone else. It was lost to me, never to be seen again. And so, when the book came out in paperback, I bought a copy. I read that copy twice a year for many years, always saving it for a dark, rainy day. It somehow seemed appropriate, reading Bag of Bones when the rain was falling down around me. It would call to me on my shelf, begging to be read. I swear I could hear the book sigh with contentment when I took it off the shelf and held it in my hands. Not learning my lesson the first time, I lent it out to someone who either lost it or lent it out to someone else. It was never clear what happened to the book. Suffice i

Will Become a Testament to King's Literary Ability

Published by Thriftbooks.com User , 19 years ago
Many longtime King readers consider his early Magnum Opus, The Stand, the author's best work. Until the publication of Bag of Bones, that charge may have been true. No more. In BOB, King leaves cliché (both genre and his own) behind and weaves a classic, sprawling, and wholly satisfying tale of good and evil, right and wrong, love and hate, and the living and the dead.Mike Noonan's life - and writing career - come to a crashing halt when his wife dies of an aneurysm while watching an automobile accident. For four years, he puts himself on neutral and glides through life, until he abandons his house for Sara Laughs, his summer retreat in Western Maine, on the shores of Dark Score Lake. There, he meets Mattie and Kyla, a single mother and her daughter who happened to get mixed up with the greedy, semi-psychotic computer magnate Max Devore, who wants Kyla, his granddaughter, as his own. Mike is inevitably drawn into the struggle, and at the same time finds that he, too, has a pulse and remnants of life. So too, he discovers, does Sara Laughs, a house that harbors spirits and secrets galore.Part romance, part meditation on love and life, part legal thriller, and part satire of the writing industry, Bag of Bones is King's only pure ghost story. HP Lovecraft opined that any real ghost story is about love, and it is this, the most basic (and complex) of human emotions, that King explores - love for wives, love for children, and love of place. He keeps his easygoing style and voice, but the subject matter in Bag of Bones is his most contemplative and mature, and while it has elements of horror (some of the ghost scenes are throat-closers), Bag of Bones manages to grow beyond that into a very serious novel.For a writer as maligned as King by the so-called literary-intellectual field, Bag of Bones could be a thumb-in-the-nose, look-what-I-can-do sort of book, but it escapes pretension and snobbery as well. Many of his books, written almost automatically in the 1980s and early 1990s, are downright formulaic, and there's a hint of that in Bag of Bones, but not much. It is also his best ghost story, as none of the main characters are psychics - just normal people who can experience ghostly phenomenon, making it all the more terrifying for the non-psychic reader. While The Shining pulled that off successfully, and Rose Red failed miserably, Bag of Bones keeps the hauntings grounded in something everyday people experience - that subtle, chill wind on a hot day, and noises in the night that may or may not be quite natural.It's disappointing that King's retirement looms so immediately on the horizon, but if one book should stand as a tribute to his literary works, that book should be Bag of Bones. It's a wholly different beast from The Stand, the other book for which King will undoubtedly be recognized for hundreds of years in the future, but Bag of Bones hums with a kind of tightness and literary prowess rare in any book, in any time.Final Grade: A

Published by Thriftbooks.com User , 21 years ago
Stephen King is like a breathe of fresh air to modern literature, and yes I said literature. I truly believe that he will still be read a hundred years from now in classrooms as a kind of Dickens of our time, popular and written off by most critics, but endearing. His characterizations by themselves make him better than most writers today, and his imagery makes him one of the best. All through his career he has given us great things, but in this book it's different. In Bag of Bones he gives us his best work so far, a great story, wonderful characters, and a surreal small town atmosphere that he can create better than any other writer alive today. Take the three parts at once dream sequence for example. This is not the work of a hack writing only for money, this is a riveting and extremely well-written section of a book filled with such parts. The rock- throwing scene by the lake was also especially good, showing the reader pure evil in mind movie realism.People who have dismissed King should immediatly pick up Bag of Bones, they will find out what they have been missing by skipping him. It was wonderfully written, beautifully plotted, and actually quite creepy as well (the refridgerator magnets, the knocking on the basement wall). But then, who really cares if the critics like him or not, as long as people who know can recieve enjoyment from King's work. Read this book, and you'll be happy that you did.
Copyright © 2020 Thriftbooks.com Terms of Use | Privacy Policy | Do Not Sell My Personal Information | Accessibility Statement
ThriftBooks® and the ThriftBooks® logo are registered trademarks of Thrift Books Global, LLC