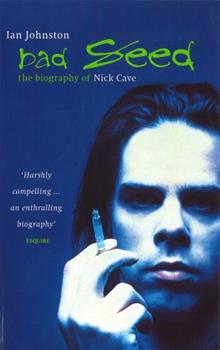 A widely acclaimed biography of one of rock's most compelling, uncompromising and influential singer-songwriters, Ian Johnston's BAD SEED offers a superb overview of Nick Cave's career to date. Through Cave's fronting of the incendiary bands The Birthday Party and The Bad Seeds, producing music of unfettered expression and explosive intensity, to his creative collaborations outside of the rock industry in film and literature, BAD SEED illustrates...

Published by Thriftbooks.com User , 19 years ago
Being a rather recently converted fanatic of the music of Nick Cave, I knew nothing about him and only tidbits about where he came from musically. I first read The Life and Music of Nick Cave by Maximilian Dax, but it was a very uneven bit of puffery. So, hungering for more information, I bought Bad Seed.Bad Seed is not a bad book. While Ian Johnston is not the most eloquent writer around, he is much better than Dax. Bad Seed is well organized, informative, and at times very witty. And while this volume does not contain near the number of pictures that Dax's does, the photos it does have are germane to Cave's career.Johnston's portrait of Cave's personality gives the reader a fresh understanding of what he is about. He charts Cave's growth from a brash and impetuous young rock shouter to the mature and nuanced performer he became. And I like some of the stories of some of his early riotous behavior. One that strikes me as humorous is the story of him playing at a street festival in Melbourne and his father coming unexpectedly to see him perform for the first time. Cave was rolling around in the gutter screaming into the microphone when he just happened to glimpse his father looking at him with a look of total bewilderment on his face. Picture that! Other stories of drunken revelry and drug crazed antics were equally amusing. But it is also refreshing to read how Cave took control of his life and drew back from the abyss into which so many performers fall.In addition to his music, Bad Seed provides a look at his writing, his acting, and his twin obsessions with the Bible and with the degeneracy into which one can sink. One learns too, of artists who have influenced his songwriting and style. I knew he admired Lee Hazlewood and Johnny Cash from Dax, I had no idea he liked Karen Carpenter!The only negative really is that Johnston spends too much time on Cave's early years and not nearly enough time on his life and music from Tender Prey forward.If you are eager to know about Nick Cave, Bad Seed is a good place to start.

Published by Thriftbooks.com User , 20 years ago
This book is wonderful. I just couldn't put it down. It's thoroughly detailed, and full of great anecdotes about Nick and his bandmates, which made me laugh more than anything I've read for a long time.It's certainly a worthy biography of this remarkable artist.

Thorough coverage of an amazing singer and writer

Published by Thriftbooks.com User , 23 years ago
More than just about Cave's music, this book reveals his obsessions over everything he does. While Johnston at times seems unable to be critical in his opinions, the details he gives of Cave's writing and lifestyle more than make up for the hero worship. An excellent book that you'll finish in no time.

Not just for fans!

Published by Thriftbooks.com User , 23 years ago
This book is flawlessly written. It reads like a great novel, following Nick from the Boys Next Door to the Birthday Party to the Bad Seeds themselves. For the fans, there is plenty of sories information on the life and various projects of Mr. Cave.

Published by Thriftbooks.com User , 23 years ago
I read this book last night, and finished it all in less than two days. I was fascinated and repulsed at the same time to learn of the antics and habits of this amazing singer/writer! He was such a scum junkie, but he was so concise in what he believed. It was a thrill a minute, making me laugh, and cry at the same time at the happenings that shaped his life.
Trustpilot
Copyright © 2022 Thriftbooks.com Terms of Use | Privacy Policy | Do Not Sell or Share My Personal Information | Accessibility Statement
ThriftBooks® and the ThriftBooks® logo are registered trademarks of Thrift Books Global, LLC