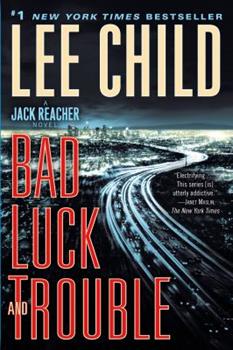 From a helicopter high above the empty California desert, a man is sent free-falling into the night.... In Chicago, a woman learns that an elite team of ex-army investigators is being hunted down one by one.... And on the streets of Portland, Jack Reacher--soldier, cop, hero--is pulled out of his wandering life by a code that few other people could understand. From the first shocking scenes in Lee Child's explosive new novel, Jack Reacher is plunged...

One of the Greatest Children's Books Ever

Published by Thriftbooks.com User , 21 years ago
Dominic is one of the greatest works by one of the two greatest children's authors (I consider Lloyd Alexander the other). Dominic is a great character and it is marvelous to read of his picaresque adventures. The novel also has a lot of depth in it.The novel follows Dominic who is a dog. He begins to feel restless one day and sets out on the road for adventure. Dominic constantly uses his many talents and wits during the trip. In his adventures Dominic finds treasure, a little love, the horrid Doomesday Gang, and, eventually, himself.William Steig always conveys a clear message in his novels. He writes about how to love life and everything about life. He writes great pathetic falacies (descriptions of nature). He writes of love for fellow beings. Steig also addresses important facets of life. My favorite part of Dominic is when Dominic has to deal with the death of a friend. Steig writes: "He (Dominic) had to cry. Life was suddenly too sad. And yet it was beautiful. The beauty was dimmed when the sadness welled up. And the beauty would be there again when the sadness went. So the beauty and the sadness belonged together somehow, though they were not the same at all."Steig's prose is always as marvelous and as meaningful. Few novelists of any genre have had the success that Steig has in Dominic. All children and many adults should read this book. (Also, read Steig's Abel's Island and The Real Thief.)

Published by Thriftbooks.com User , 22 years ago
"Dominic" was my favorite book as a child. It is amagical, yet solemn story that meditates on more complicated issuesthan most "adult" books ever do. Death, life, joy, sorrow, tough choices, loss, wonder and love are all encountered by the wonderful Dominic on his journey. I always finish "Dominic" feeling slightly sad, but very renewed. The one metaphor that comes to mind when I think of this book is "leaving home". When you leave home for the first time, you feel a sense of sadness and loss, but you also feel excited and curious about the new things you will see. Dominic's journey is a microcosm of this experience. The story is written tenderly, yet it sheds most trappings of sentimentality. Dominic moves on and on through his world, and he accepts that the only way to be happy is to loosen attachments to the past, even as you learn from them, and move with confidence into the future.

A story that's stayed with me for 25 years

Published by Thriftbooks.com User , 22 years ago
I was given this book by my brother almost 25 years ago, and I still consider it the best children's book I've ever read. In fact, I still pull it out from time to time and read it when I need a lift. I love the fact that Steig respects children enough to use sophisticated language and themes. This book has always made me feel smart and brave--just like Dominic himself! He is a wonderful hero and role model for boys and girls alike. It's a joy to read that so many others have also been touched by its magic. And the illustrations (by Steig) are incredibly evocative--they really draw one into Dominic's adventures AND his emotions. It doens't get any better than Dominic for bright, curious kids.
Trustpilot
Copyright © 2022 Thriftbooks.com Terms of Use | Privacy Policy | Do Not Sell or Share My Personal Information | Accessibility Statement
ThriftBooks® and the ThriftBooks® logo are registered trademarks of Thrift Books Global, LLC