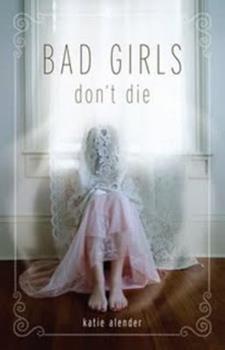 When Alexis's little sister Kasey becomes obsessed with an antique doll, Alexis thinks she is just being her usual weird self. Things get weirder, though, when their house starts changing. Doors open and close by themselves; water boils on the unlit stove; and an unplugged air conditioner blasts cold air. Kasey is changing, too. Her blue eyes go green, she starts using old-fashioned language, and she forgets chunks of time. Most disturbing of all...

A ghost story for people who don't like ghost stories--and those who do, too

Published by Thriftbooks.com User , 12 years ago
I didn't think I'd like this book; it doesn't take much to scare me out of my wits, and I don't typically read novels dealing with ghosts and possession. But I read this one anyway. And I LOVED it. Bad Girls Don't Die is more than a ghost story. There's a touch of romance and an air of mystery, and a challenge to really get to know people before slapping a label on them and deciding you can't be friends with them--a mistake most people, including me, frequently make. Bad Girls has a well-paced, character-driven, intriguing plot that kept me turning the pages for hours when I only meant to read for minutes. Furthermore, if I had a Top 10 list of my favorite fictional people, Alexis would be on it. She's smart, funny, unafraid of getting her hands dirty, and I really enjoyed her first-person narration. And she has pink hair! On a couple side notes, Bad Girls is a pretty squeaky clean read, ghosts and all. There's no sex, drugs, or gratuitous swearing--and I really appreciated that. (The cleanliness also felt natural, which is another plus. Cleanliness can feel just as forced as "edginess".) Thank you, Katie Alender, for acknowledging that those things are not a part of every teenager's life. Also, while Bad Girls is exceptionally well put-together, the ending wrapped up a little too quickly--and awkwardly--for me. But it fit. Overall, I have no large complaints. If Twilight is a vampire book for people who don't like vampire books, Bad Girls Don't Die is a ghost story for people who don't like ghost stories. And I highly recommend it!

Published by Thriftbooks.com User , 12 years ago
I love mysteries and the paranormal, but add that to a teenager's life within a dysfunctional family and you have a really great book. It's very well written with believable characters that had me in goosebumps some of the time and fighting back tears (joyful or sad I'm not going to say!) in the end. This may be Katie Alender's first book but it won't be her last.

Published by Thriftbooks.com User , 12 years ago
Alexis Warren is a tough, sarcastic loner who is nursing a grudge against the cheerleading team for driving away the only friend she ever had. To deal with her loneliness, she turns to photography and seeks shelter in her dark room. After one peculiar night photographing her 100 year old house, Alexis's sister Kasey begins acting odd. She becomes spiteful and demanding, and she has extreme mood swings. At first, Alexis attributes her strange behavior to the ups and downs of being in middle school--but after a series of accidents that may not have been accidents after all, Alexis has to ask herself, Is something more sinister at work? Snarky, engaging, and downright creepy, Bad Girls Don't Die is one stellar debut novel; Katie Alender has created one of the most engrossing and consuming novels of the year. The witty, casual tone of the novel, told from Alexis's point of view initially hooks readers, but it is the darker undertones concealed by Kasey's sweet face and her "innocent" doll collection that really ensnares readers and makes Bad Girls Don't Die such an unpredictable and tantalizing read. Alexis is a wonderfully dynamic character--she is strong and opinionated and learns how to deal with her issues in a mature manner, but along the way she also learns to recognize similar qualities in those she previously judged, making her likable without being cliché. Though the haunted house and possession stories have been done many times before, Alender's fresh slant on the topic will enthrall readers and leave them just a bit creeped out.

Can't put it down thriller!

Published by Thriftbooks.com User , 12 years ago
I haven't read a book that I couldn't put down in years, and this one captured my attention and my imagination for the quick few hours. I was easily drawn in to Alexis' life--and each experience seemed more real than the last. I needed to know about their sister-bond, and the bond to their home, which was a child's delight in its architectural wonder. A book like this makes me search for more by this author; I hope it doesn't take long Katie Alender to follow up her debut novel, Bad Girls Don't Die.

Published by Thriftbooks.com User , 12 years ago
Alexis might not be perfectly well-adjusted to high school life, but she finds her niche as an outspoken pink-haired smart-aleck quite satisfying, thank you very much. Her four-person family is far from perfect, but they have always managed to get by, in their spooky architectural jumble of a house. Alexis' mother spends more time at work than at home, but so do millions of other moms across America. Kasey, her doll-obsessed little sister, is sometimes too passive for her own good, but hopefully the doll-collecting is something she will grow out of. As for her father, they aren't exactly close, but he could be worse. One night, after a family argument leaves Kasey in tears, Alexis comes to the rescue in the role of comforting big sister. Kasey requests a story, so Alexis soothes her with a made-up story off the top of her head. Since it is for her baby sister, the story revolves around a little girl and her doll, Kasey's favorite topic. Naturally, Alexis doesn't think much of the story, though come to think of it, it is a bit strange at how smoothly the spontaneous story rolls off her tongue. However, shortly after Alexis' tale, Kasey starts behaving weirdly. More strangely than normal anyhow. It starts small, with her eyes sometimes changing color from blue to green and using old-fashioned language, like "oughtn't." At first, Alexis tries to brush away her foreboding feelings, deeming the odd vibes she is getting from Kasey as a figment of her imagination, nothing serious. When mysterious lights appear in the middle of the night, doors close themselves, and the air conditioner goes haywire to the point where Alexis can see her breath in the house, she knows it is no overactive imagination. She has no idea what exactly is going on, but something weird is happening in their house, and much as she hates to admit it, Kasey has something to do with it. Events spiral rapidly out of control, as midnight wanderings progress to thievery and even attempted murder. Alexis has no idea who to turn to - does anyone even believe in the supernatural anymore? People might just lock Kasey up as schizophrenic, but Alexis knows better. Her little sister is not crazy. Kasey is possessed. Katie Alender's BAD GIRLS DON'T DIE is a haunting tale of one town's murderous history and a ghost that wants revenge. Reviewed by: Amber Gibson
Copyright © 2020 Thriftbooks.com Terms of Use | Privacy Policy | Do Not Sell My Personal Information | Accessibility Statement
ThriftBooks® and the ThriftBooks® logo are registered trademarks of Thrift Books Global, LLC