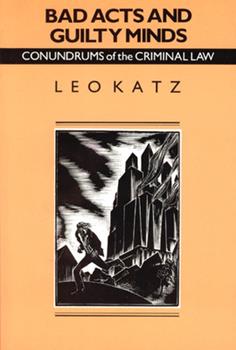 Bad Acts and Guilty Minds: Conundrums of the Criminal Law

With wit and intelligence, Leo Katz seeks to understand the basic rules and concepts underlying the moral, linguistic, and psychological puzzles that plague the criminal law. Bad Acts and Guilty Minds . . . revives the mind, it challenges superficial analyses, it reminds us that underlying the vast body of statutory and case law, there is a rationale founded in basic notions of fairness and reason. . . . It will help lawyers to better serve their...

Published by Thriftbooks.com User , 21 years ago
On the contrary, says Leo Katz: hard cases _expose_ bad law and force us to correct it. The flaws in apparently sound principles aren't always obvious when we apply them only to easy cases.With this approach, Katz offers a book that is all but unique in the legal/philosophical literature, and one that should appeal to lawyers, law students, and nonlawyers alike. Bringing to bear a large quiverful of hypotheticals, thought experiments, and extreme cases (some real, some contrived, some purely fantastical), Katz puts common legal principles through their paces and shows us that our intuitions, while reliable in a general way, may not be as sound as they appear at first blush.Katz's own area of expertise is criminal law, but he may have done the book a mild disservice in its subtitle: as he is himself well aware, the "conundrums" with which he deals -- What is the difference between an act and an omission? What does it mean to do something "intentionally"? What does it mean to say that something is the legal "cause" of something else? -- bear on many areas of the law, including (for example) contracts, torts, and wills.They are also of general philosophical interest, of course, and Katz is himself a competent philosopher more or less in the "analytic" camp; indeed, his footnotes are as likely to cite Searle or Austin as to refer to a case. His discussions of e.g. tacit knowledge (a la Michael Polanyi) and judgment under uncertainty (a la the famous work of Kahneman and Tversky) are most gratifying and in each case will point the interested reader to a fascinating body of literature with which, probably, lawyers ought to be familiar. (For example, he does a nice job of tying the psychology of risk and uncertainty to the psychology of jury verdicts.)And he is one of few writers who make (what I regard as) sound use of thought-experiments, which in the wrong hands (say, Rawls's) are merely tools for confusing oneself and others. Another writer with the right hands is Judith Jarvis Thomson -- and sure enough, Katz cites her well-known "Trolley Problem," for which see _Rights, Restitution and Risk_ and the additional discussion of the problem in _The Realm of Rights_. (By the way, Katz does not explicitly set out his own fundamental outlook but his overall approach to moral problems seems to be based on a sort of critical intuitionism not unlike Thomson's.)The resulting volume is a thoroughly enjoyable and stimulating read. Law students in particular may want to read it as early as possible, as Katz's use of hypos is much like what we encounter in law school and will probably do more to galvanize the reader into "legal reasoning" than any ten other books on the topic. But it's suitable for a general readership.It is also a fine corrective to the view that the law can be rendered clear and unambiguous by reliance on a handful of simple principles (e.g. by reducing all law to "property rights"). Katz is at pains to show -- I think successfully -- that no s

The Legal Theorist as Storyteller

Published by Thriftbooks.com User , 22 years ago
I was one of Leo Katz' students in the first criminal law course he taught following the publication of this book, at the University of Michigan Law School in Ann Arbor. Very justifiably BA & GM was one of the required texts, as this book as as good a literary recreation of a professor's pedagogy as I have ever read. The book not only conveys Professor Katz' humor and intellectual curiosity, but also shows how brilliant he is to bring in subjects you might not at first consider germane to penal theory and law, but that afterwards you will not be able to think about criminal law *apart* from: analytic philosophy, "alternative history", the classics of American literature, and a host of fascinating stories from a variety of cultures and situations. You don't have to be a lawyer, or even interested in things criminal, to enjoy this book. It's one of those books that can change the way you think about situations in your life. Thoroughly recommended.

Fascinating use of law, philosophy, and history

Published by Thriftbooks.com User , 22 years ago
Leo Katz, a professor of law at the University of Pennsylvania, has a wonderful way of blending philosophy, history, sociology, and law together to present a compelling discussion about conundrums of law.For example, suppose A is planning a desert trek, and B and C independently decide to kill A. B poisons the water in A's canteen. C, not knowing what B has done, drills a tiny hole in the canteen. A goes off to the desert and dies of thirst. Who killed A? After all, if C had not drilled the hole, A would have been poisoned to death.Katz explores these and other issues with a very readable and witty style. One of the famous cases he discusses is Regina v. Dudley and Stephens, a famous (or infamous) case to all law students. Dudley, Stephens, and two others set off in a boat. Disaster struck, and they barely managed to get to a lifeboat; however, they had little food and no water. Days passed, and as they wondered if they could survive long enough to be rescued, Dudley suggested to Stephens that they kill the cabin boy, who was the weakest of the four, and eat him. The third person (Brooks) protested, but did take part in the eating when Dudley and Stephens did the killing. A couple of days later, they were rescued. Dudley and Stephens were prosecuted for murder and convicted. Should they have been? Did the desperation of their circumstances make it "necessary" for them to kill the cabin boy to survive?These are very difficult questions and are largely unanswered, even in modern law, but Katz makes them worth thinking about, and he's very entertaining. Lawyers and non-lawyers should enjoy this book.
Trustpilot
Copyright © 2022 Thriftbooks.com Terms of Use | Privacy Policy | Do Not Sell or Share My Personal Information | Accessibility Statement
ThriftBooks® and the ThriftBooks® logo are registered trademarks of Thrift Books Global, LLC