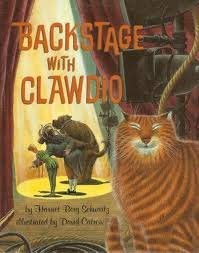 Clawdio the theater cat describes how he keeps everything running smoothly backstage during a production of "Peter Pan." This description may be from another edition of this product.

A Wonderful Introduction to the Theater!

Published by Thriftbooks.com User , 14 years ago
It is really a shame that this book is out of print. I recently visited a class of 3rd graders and was asked by the teacher (a good friend) to read this book to the class. Being a director of community theater, as well as an actor, it sounded fun. Little did I know that I would be as engrossed in the enchantment of this book as much as the kids were! Harriet Berg Schwartz creates a very believeable character in Clawdio the backstage cat. As he (she?) guides the reader around backstage during a production of Peter Pan, children (and adults, I might add) will be entranced as they get just a taste of the backstage magic of live theater. David Catrow's illustrations are both hilarious and captivating, giving you a much "bigger than life" look at the world behind the stage curtain. This book should be in every Elementary School library, not to mention in every teacher's classroom! A wonderful introduction to the world of theater!
Trustpilot
Copyright © 2022 Thriftbooks.com Terms of Use | Privacy Policy | Do Not Sell My Personal Information | Accessibility Statement
ThriftBooks® and the ThriftBooks® logo are registered trademarks of Thrift Books Global, LLC