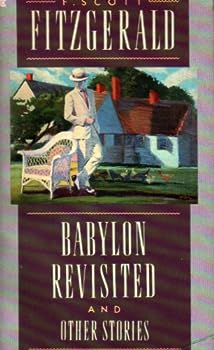 Babylon Revisited : And Other Stories

Ten stories tell of encounters with the rich and social elite during the 1920s.

Published by Thriftbooks.com User , 15 years ago
F. Scott Fitzgerald is one of our greatest writers. He is best known today for his many wonderful novels, especially The Great Gatsby. As time has passed, his marvelous magazine stories have faded from sight . . . even though those were more widely read than his novels when they were written. In Babylon Revisited: And Other Stories you will deepen your understanding of the novels . . . and of their author in these often semi-autobiographical tales. The best stories have as much impact as any of the novels in a spare exposition that adds to their power. Each story deals with the same general theme: We live on hope which is based on illusions about reality. When faced with reality, we happily escape into new hopes based on different illusions. We are sort of like Peter Pan: We don't want to grow up. The theme comes across with startling persuasiveness as Fitzgerald unpeels the many forms of hopeful illusions that will seem familiar to every reader. The stories build chronologically across the backdrop of the United States after World War I in the 20's and 30's. That shift in authorship times also inadvertently adds the drama of seeing how the psychology of the young and educated changed as American went from mindless boom to seemingly unending bust. Fitzgerald has a rich imagination to makes his world open up for readers so that you can feel both the physical sensations and the emotions of the characters . . . and become the characters while you are reading. The stories themselves have that delightful quality of exaggeration that makes his points indelible. The Ice Palace explores a Southern beauty's pursuit of an advantageous marriage in the frozen tundra of Minnesota in winter. May Day recounts the pursuit of pleasure and accomplishment by those of various social classes and beliefs. The Diamond as Big as the Ritz is a wild tale of a mythical place and the consequences of unlimited wealth. Winter Dreams deals with the painful consequences of acting on the illusions of romantic love. Absolution is an amazing story about how we can carelessly end up being untrue to God and ourselves. The Rich Boy considers how being rich and powerful can get in the way of being close to others. The Freshest Boy looks at being an awkward teenage boy and how he came to make peace with the world. Babylon Revisited shows how our mistakes can come home to roost after we believe we are invulnerable. Crazy Sunday is an astonishing look at the psychology of how we connect to one another through others. The Long Way Out is about a woman who suffers from a mental collapse and is now ready to return to her husband . . . when fate steps in. My favorite stories in the book are May Day, The Diamond as Big as the Ritz, The Freshest Boy, Babylon Revisited and Crazy Sunday. If you haven't read these stories before, you have a great treat ahead of you. If you can find a copy of George Guidall's narration for Recorded Books, your pleasure will be even grea

Babylon Revisited is Timeless and Apt

Published by Thriftbooks.com User , 16 years ago
The Book of Revelations in the New Testament is the most likely source from which F. Scott Fitzgerald draws his "Babylon Revisited". In Revelations, Babylon the Great (also an ancient Near Eastern city of materialism and sexual excess) is the `mother of whores' and the source of all evil in the Roman Empire. She is said to have been defeated by God and judged for her excessive sin. Upon her destruction, the saints rejoice while the merchants and hedonistic pleasure seekers morn. Symbolism abounds in this revision of the timeless tale and the choice of Fitzgerald's title could not be more appropriate. Charlie himself is the regeneration of Babylon. During the economic boom of the 20's, Charlie and his wife lived life to its fullest and most shallow degree. They partied until sunup. They squandered wealth. We even get the impression that there was a significant amount of infidelity existing on both sides. As with Babylon, Charlie is punished: The stock market crash in 1929 liberates him of a fortune, "his child [is] taken from his control, [and] his wife escaped to a grave in Vermont." As with Babylon, Charlie's fall had its rejoicers and mourners. Marion, his wife's bereaved sister, saw Charlie's fall as an opportunity to gain control of his child, and with sincere intentions rid her family of the sinner. Though she doesn't expressly rejoice in her brother-in-laws demise, she does blame him for her sister's death and understands why his life has turned out askew. Duncan and Lorraine, on the other hand, mourned the loss of their sinister partner in indulgence. This story is complete with all of the historic reference and symbolism that has come to define F. Scott Fitzgerald. What a fantastic, unbelievably creative writer. It's amazing how timeless his writings are, and "Babylon Revisited" is the perfect example of that fact. It really makes you think about your own life.

Published by Thriftbooks.com User , 20 years ago
I bought this volume of stories simply to get a copy of Fitzgerald's "May Day" which I'd read in one of my college texts and then could not find for years. I have always felt that "May Day" would make a superb film--and the screenwriter could lift most of the dialogue right out of the story. It is that good and simple and dramatic. Actually every one of the stories in this collection is first rate. Here is Fitzgerald, only in his 20's, writing of American aspirations before, during and after World War I. And no one wrote about this subject better than he did. The characters are rich and complex, all of them dissatisfied with the bones that life has thrown them, all of them desiring what others have. The reader sees their foibles and loves them anyway. These are not perfect people. They are real people in a time of trouble--fighting, most of them, simply to stay afloat in a world changing faster than anyone would have thought possible. I cannot recommend these brilliant stories highly enough. There is also a brief life and appreciation of Fitzgerald in this lovely Scribner edition.

Published by Thriftbooks.com User , 22 years ago
I've just started on this book and already the stories I've read so far I have to rate as among the best short stories I have ever read. "Winter Dreams" was just exquisitely gorgeous, "The Diamond as Big as the Ritz" is a fantasy of astonishing invention, and "May Day" really opened my eyes to the unlimited terrain the short format offers. Fitzgerald is a genius--his ability to evoke imagery and illusion is absolutely breathtaking!

Published by Thriftbooks.com User , 23 years ago
Buy this book for "Absolution" alone. (incidentally, it was originally intended as a childhood scene for THE GREAT GATSBY, but was cut and turned into a short story). "Absolution" is easily one the greatest short stories I've ever read. "The Rich Boy" is another masterpiece, and the title story is wonderful, too.
Copyright © 2020 Thriftbooks.com Terms of Use | Privacy Policy | Do Not Sell My Personal Information | Accessibility Statement
ThriftBooks® and the ThriftBooks® logo are registered trademarks of Thrift Books Global, LLC