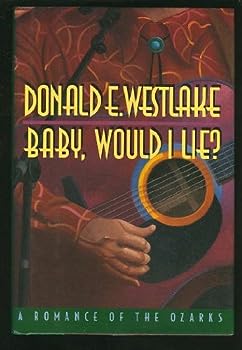 Baby, Would I Lie?: A Romance of the Ozarks

Westlake has no peer in the realm of comic mystery novelists, claims the San Francisco Chronicle. Now, the daredevil journalist-heroes of the bestselling Trust Me On This return. In Baby, Would I Lie? intrepid reporter Sara Joslyn is in Branson, Missouri, covering a gory sex-murder trial.

Funny and biting look at murder, country music, and tabloids

Published by Thriftbooks.com User , 19 years ago
_Baby, Would I Lie?_ is the sequel to Donald Westlake's _Trust Me on This_. That book concerned Sara Joslyn's time working for the Weekly Galaxy, a sleazy tabloid. At the end of that book Sara and her editor, now lover, Jack Ingersoll, manage to escape to New York and respectable journalism, in the form of Trend, a weekly modelled as far as I can tell on the New Yorker.As this book opens, Sara is on her way to Branson, MO. Her latest assignment is to cover the murder trial of Ray Jones, a middle-aged country music star with a theater in Branson. One of Jones' employees was found murdered and dumped in Table Rock Lake, and Ray's car was seen with incriminating bloodstains. The evidence against him is purely circumstantial, and fairly weak, but the trial is also being held in the court of public opinion.As Sara arrives, she encounters to her dismay some of her former colleagues from the Weekly Galaxy. Naturally, they too are covering this celebrity trial. And before long Jack is in Branson as well, chomping at the bit to nail the Galaxy at their nefarious journalistic tricks.The story is told from several points of view, but mostly those of Sara and Ray Jones. We soon learn that Ray is also in trouble with the IRS, and we get hints that he is not guilty of the murder but that he knows more than he is letting on, and that he has some curious scheme afoot. Much to the dismay of his legal team, which is confident they can get him off if they can keep him reined in. Meanwhile, he is mysteriously letting Sara have significant access to his legal preparations, much to the further consternation of his lawyers. Is he setting up Sara somehow?The resolution is pretty clever with a nice twist or two. Westlake's portrayal of Branson, a town I know reasonably well, is not bad. (There are one or two missteps, and it's rather out of date. (The book was published in 1994, and depicts the town as it was in perhaps 1990 or so.)) He tries somewhat to avoid stereotyping Midwestern tourists, with limited success. He is pretty sound (and on the whole, sympathetic) on the country musicians themselves, though. The lyrics to Ray Jones' songs are all by Westlake, and they are quite good country pastiches. Ray Jones himself is well depicted -- not exactly a nice man, but not a monster, either. And the book is quite funny.

Published by Thriftbooks.com User , 21 years ago
Like a book you can't put down, this audiodisc is one I couldn't turn off. Nicola Sheara (Reader)brings a unique -- and believable -- voice to every character and enthuses the prose with a sense of lively anticipation. Other reviewers have commended the writer; I want to be sure that audio tape/disc listeners know that they won't be disappointed in this rendition of a very entertaining tale.

Published by Thriftbooks.com User , 22 years ago
Donald Westlake writes books with characters that you just can't help but like. They can be, as in the great Dortmunder series, felons, burglars, kidnappers, but they are all likable. In this book, his characters are tabloid journalists, who are only a step above the lowest of the lows, defense attorneys. He skewers them, but some of them, DARN IT, you can't but help liking.

Published by Thriftbooks.com User , 22 years ago
Extremely enjoyable mystery with a country-western setting. Contains the full lyric of "If it ain't fried, it ain't food", itself worth the price.Does anyone out there know the name of another Westlake book in which the main character, a film critic and college teacher of film courses, inadvertently causes the death of his date for the evening in his apartment. The book features a running gag in that all his books have titles in the familiar modern vein, Title: Subtitle, for example, "Gaza Strip: Breeding Ground for Terrorism". You get the picture. Can anyone help? Thanks.

Westlake is to clever & funny as the Mint's to green & money

Published by Thriftbooks.com User , 24 years ago
As a long-time fancier of humorists and funny writers (there is a difference), I have found that Mr. Westlake, in "Baby,Would I Lie" combines a fine comic sense with the careful crafting of an excellent story. The location, Branson, Missouri, has a veritable mother lode of material for this writer -- and he mines it to hilarious result. The character development, plot lines, sub-plot lines (and sub-sub plot lines) all make for an entertaining mix that I found absorbing. As an added little bonus, the setting of a trial, involving an accused murderer, a crime of passion, and comical prosecutors and defense attorneys, predates (or presages) the O.J. fiasco, but juxtaposing the two makes for an even more sardonic twist as one reads. "Baby, Would I Lie?" is a fun book, if you can imagine, and one that adds to Mr. Westlake's reputation as a great writer who has a wonderful and ironic sense of humor. Compared to much that passes for writing these days, his words and sentences captivate, tickle and inform. How much more can you ask of a novel set in Branson
Copyright © 2020 Thriftbooks.com Terms of Use | Privacy Policy | Do Not Sell My Personal Information | Accessibility Statement
ThriftBooks® and the ThriftBooks® logo are registered trademarks of Thrift Books Global, LLC