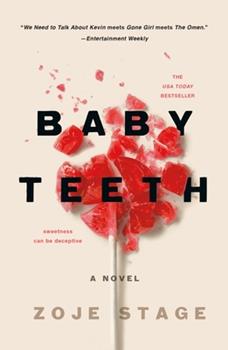 One of Entertainment Weekly 's Must-Read Books for July - People Magazine's Book of the Week - One of Bustle's "Fifteen Books With Chilling Protagonists That Will Keep You Guessing" - One of PopSugar's "25 Must-Read Books That Will Make July Fly By " - One of the "Biggest Thrillers of the Summer" -- SheReads - A Barnes and Noble Blog Best Thriller for July - " New & Noteworthy" -- USA Today - " Summer 2018 Must-Read" -- Bookish - " One of 11 Crime...

Published by Crooked Teeth I guess... , 7 days ago
Book arrived damaged and completely bent to no repair. I have not read the story yet but I was so disappointed especially because I ordered another book after this one that came sooner and was not damaged at all like this one. I am not sure this was damaged during shipping as the exterior package looked fine. The seller sold it as acceptable but for the price it really was not! ☹️

Published by Morgan , 1 year ago
Hard to put down, contemplative and heart breaking. Loved it!

Published by The Irregular Reader , 3 years ago
Hanna is nearly perfect, at least according to her daddy. So what if she still isn’t speaking at age seven? She’s clearly very intelligent, and more than capable of communicating in her own way. Those schools she’s been expelled from? They just didn’t understand her. Suzette, Hanna’s mother suspects something is wrong. Her precocious child is displaying worrying tendencies towards manipulation and violence. While her husband remains blind to Hanna’s problems, Suzette begins to suspect she may be the target of Hanna’s wrath. Let me say at the start that my interpretation of the book may be a bit different from most. I am emphatically childfree, don’t really care for children in any case, and tend to regard most of them as tiny little psychopaths until they reach their midtwenties. Am I justified in this point of view? Probably not. But that’s the mindset I’m coming from when reading this book. And it was nightmarish. The book is great, don’t get me wrong. It is tightly written, and the alternating points of view between Suzette and Hanna let us truly get to know the central characters. I had to take a break from the book about 100 pages in because it was keeping me up at night. The utter despair and hopelessness of Suzette’s situation is wrenching. She is trying (though imperfectly) to do right by her daughter, though years of abnormal and worrying behavior from Hanna have made her a bit ambivalent about motherhood. Compound this with her husband’s need to see only the perfect, upper-middle class family he desires, and Suzette is entirely alone to deal with her daughter. This I find terrifying: when dealing with mental and behavioral abnormalities in childhood, it is generally left to the mother to wonder where she went wrong, and what she could have done differently. And in all cases, motherhood is a condition with no escape. Someone may regret bringing a child into the world, but there are few socially acceptable ways to divorce oneself from parenthood, especially when being “a good mother” is considered the epitome of female (and especially middle class) success. Well, enough ranting. I did, obviously, pick the book back up (and finished the remainder in one sitting). In the interests of keeping this review spoiler-free, I’m going to say little about the latter part of the book, but I will say that I was surprised by the direction the story took. In sum, this book is a nuanced look at motherhood and psychopathy, at the loneliness of being a stay at home mother, and the frustration of being an atypical child. This book intimately describes the horror of finding out that, rather than the sweet, beautiful child you may have dreamed about, you have given birth to a monster, and are now tethered to its side. I’d be curious to see what more maternally-minded people thought of his book? We’re their sympathies (like mine) fully with Suzette? Or do they see something redeeming in Hanna? Do they feel the horror as “that could have been me”? Or does the horror lie in “Suzette should have done x,y,z”? I would love to hear your thoughts, feel free to leave me a comment or two! An advance copy of this book was provided by the publisher in exchange for an honest review.
Copyright © 2022 Thriftbooks.com Terms of Use | Privacy Policy | Do Not Sell My Personal Information | Accessibility Statement
ThriftBooks® and the ThriftBooks® logo are registered trademarks of Thrift Books Global, LLC