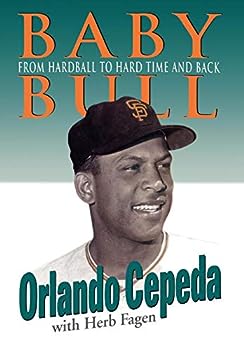 Baby Bull: From Hardball to Hard Time and Back

This book is Orlando Cepeda's story, told in his own words and with refreshing candor and great drama. This description may be from another edition of this product.

BABY BULL TOOK IT BY THE HORNS

Published by Thriftbooks.com User , 14 years ago
THIS IS THE STORY OF ORLANDO CEPEDA FORMER MLB PLAYER. ORLANDO TAKES US THRU HIS LIFE IN PUERTO RICO, BASEBALL CAREER, JAIL TIME AND HIS COMMITMENT TO BUDDAHISM. ALONG THE WAY, HE HAS MANY INTERESTING STORIES AND OPINIONS. AMONG HIS STORIES IS A THE FAMOUS BRAWL IN WHICH ORLANDO WAS ABOUT TO TAKE A BAT TO USE ON SOMEONE UNTIL WILLIE MAYS TACKLED HIM AND ENDED THAT THREAT. HE ALSO HAS SOME BAD OPINIONS OF ALVIN DARK, WILLIE MAYS, AND RUBEN GOMEZ. WHETHER ORLANDO IS TELLING THE TRUTH IN ALL OF THESE INSTANCES IS DEBATABLE. BUT HE IS HONEST ABOUT HIS ADULTERY AND DRUG USE. ORLANDO WAS A VERY TALENTED AND COLORFUL PLAYER. I FOUND HIS BOOK TO BE BOTH ENTERTAINING AND INTERESTING. I RECOMMEND IT FOR ALL BASEBALL FANS.

Published by Thriftbooks.com User , 20 years ago
Orlando Cepeda is one of the greatest baseball players of our time. His personal life story is even more inspiring than any of his professional achievements. I was so moved by his accounts of overcoming drug addiction and other tribulations. I was also inspired by his encounter with Soka Gakkai and Buddhism. I recommend another book filled with wise quotes from the Buddhism Orlando Cepeda practices titled "Open Your Mind, Open Your Life: A Book of Eastern Wisdom." by Taro Gold. Wonderful.

Nice re-read the day that Cepeda went into the BBHoF

Published by Thriftbooks.com User , 23 years ago
I saw Orlando Cepeda play throught his career (mostly in person during the time he was with St. Louis). He was my hero then, he is a hero now. The book captures it all. I just wished that its publication could have waited to include a chapter on his 1999 induction into the National Baseball Hall of Fame (maybe the paperback will). But with all the times he just missed out on the honor, who can blame the man for writing his story now.

Is an upbeat, worthwhile book.

Published by Thriftbooks.com User , 23 years ago
If you are a real fan of Cepeda or any of the teams he played for, you will probably enjoy this book. It does not fit the "tell all" biographies that have flooded the market, but it gives the man's honest interpretation of his life. Many references are made to all of the people who were "in my corner from the very beginning" but overall it is an enjoyable reading experience.
Trustpilot
Copyright © 2022 Thriftbooks.com Terms of Use | Privacy Policy | Do Not Sell or Share My Personal Information | Accessibility Statement
ThriftBooks® and the ThriftBooks® logo are registered trademarks of Thrift Books Global, LLC