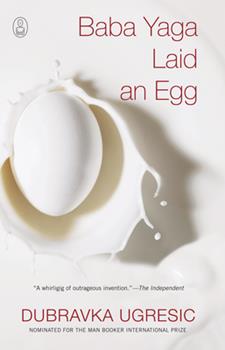 (Book #11 in the Canongate's The Myths Series)

According to Slavic myth, Baba Yaga is a witch who lives in a house built on chicken legs and kidnaps small children. In Baba Yaga Laid an Egg , internationally acclaimed writer Dubravka Ugresic takes the timeless legend and spins it into a fresh and distinctly modern tale of femininity, aging, identity, and love. With barbed wisdom and razor-sharp wit, Ugresic weaves together the stories of four women in contemporary Eastern Europe: a writer who...

A read that shouldn't be overlooked

Published by Thriftbooks.com User , 12 years ago
There is much to be drawn from the story of a resourceful witch. "Baba Yaga Laid an Egg" is a collection of short stories from Dubravka Ugresic, as she tells the tales of four modern Eastern European women as they make their way through the world, using the Slavic myth of Baba Yaga as the foundation for these tales. An original blend of mythology and modern fiction, "Baba Yaga Laid an Egg" is a read that shouldn't be overlooked.

Published by Thriftbooks.com User , 12 years ago
Once you notice them, old women are everywhere... And so too are the starlings to my mothers great dismay. The noise is bad enough, but the mess they make would drive my mother crazy. She could not stand anything unclean or untidy in her home. But cleanliness was not her only battle, she was losing her words and becoming mixed up from Alzheimer's. At the Grand Hotel three old women are checking in, how long they stay is up to fate. The oldest is confined to a wheelchair, wearing a single large boot with both legs tucked inside. The next is an exceptionally tall woman who seems to always carry a breeze about her; she also carries a string of dead husbands behind her. The last is a short grey haired woman with big bosoms and an equally big heart. But what has any of this to do with Baba Yaga, a witch who flies about in a mortar, all but blind with only her great sense of smell to lead her as she moves about the world for good deeds or ill, making mischief at her will. As a woman of great power, Baba Yaga has the ability to alter her size or her shape, often taking the form of a bird. And isn't it birds who lay eggs... Baba Yaga Laid an Egg is an utterly unique story retelling the myth of Baba Yaga in a distinctive style that is free of traditional form. The story of Baba Yaga is a story of women; mothers, daughters and lovers. Traditionally Baba Yaga is an old woman so it is no surprise that the leading characters here are themselves old woman. But it is not just ageing that is central to the issues in this book but also femininity and identity that is questioned. A story recommended only for those who are willing to put in the effort to get to know this old and startling witch known as Baba Yaga.
Trustpilot
Copyright © 2022 Thriftbooks.com Terms of Use | Privacy Policy | Do Not Sell My Personal Information | Accessibility Statement
ThriftBooks® and the ThriftBooks® logo are registered trademarks of Thrift Books Global, LLC