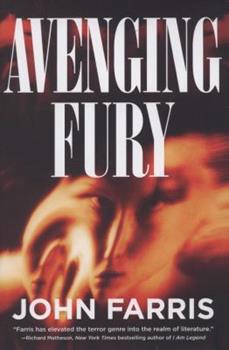 Avenging Fury (Fury and the Terror)

Eden Waring is an Avatar, possessing astounding psychic abilities . . . and destined to fight an ancient evil. Her battles against Mordaunt, the ageless Dark Side of God, have been many, but the war is far from over. She destroyed Mordaunt's human body in the deserts of Las Vegas, but his many followers still walk the Earth. They vow to resurrect their Master and exact vengeance upon Eden in a melee of magic and violence. As Eden fights for her life,...

Published by Thriftbooks.com User , 13 years ago
Although mortals see her as a freak even when she saves their lives and has the FBI psychopath assassins after her, Eden Waring proves time after time she is a caring Avatar; she uses her mental skills to keep people safe. Her recent efforts brought her into war against Mordaunt the evil one from another plane, who thought he could manipulate the twenty-something female as his pawn to bring chaos to this realm. He thought wrong as Eden defeated him and incarcerated his physical form inside molten glass (see THE FURY AND THE POWER). However, Eden makes one key mistake caused by her inexperience as an avatar fighting non-human malevolencies. Part of Mordaunt's soul escaped the imprisonment just prior to the glass melting. Thus his female persona Delilah is not just out there; she goes to 1926 Georgia waiting to possess Eden's doppelganger Gwen when the latter arrives. Near Vegas just after the Mordant meltdown, in Eden's present, Delilah inside Gwen confronts the kindhearted Avatar with both using Dark Energy that will change the Universe. The final "Fury" tale may have taken three decades to arrive, but fans will fully appreciate this strong horror suspense thriller as the climatic good vs. evil showdown occurs. The story line is hyper fast-paced from the onset and never takes a breather even when Gwen goes back in time as John Farris accelerates the velocity of his plot. Fans of the saga will appreciate the invigorating finish to an exhilarating epic quartet. Harriet Klausner
Copyright © 2020 Thriftbooks.com Terms of Use | Privacy Policy | Do Not Sell My Personal Information | Accessibility Statement
ThriftBooks® and the ThriftBooks® logo are registered trademarks of Thrift Books Global, LLC