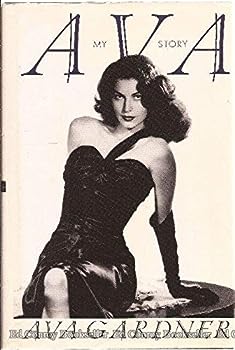 This description may be from another edition of this product. Hardcover Edition of Ava Gardner's own story with no hold barred. Like a novel but Ava really lived it.

Published by Thriftbooks.com User , 16 years ago
If you can imagine what Ava Gardner was like, then this book is a must. It reads just like you'd imagine it would. This is absolutely the best-of-the-best autobiography I have read to date. I have read Marilyn Monroe's and Maureen O'Hara's, and they weren't nearly as captivating. When I think of Ava Gardner, I use to think of sexuality and booze. Now after having read this book, I still think that. She has quite the sense of humor and makes numerous witty retorts in regards to her life and the studio system that she fervently disliked. This is most evident in her words on husbands Mickey Rooney, Artie Shaw, and Frank Sinatra, and how they were in bed. Also, not to be ignored is her unique relationship with "the Aviator" himself, Howard Hughes. Ava is the only woman who could have turned him down, and gotten away with giving him a scar to remember her by. She also discusses her love of Spain, which made me want to visit the place instantly, even though I have yet to do so do to limited means (I don't have a job and still live with my parents - get the picture?). This is probably the best book I have ever read.

Published by Thriftbooks.com User , 16 years ago
I also was initially distracted by the country girl narrative ("and honey, let me tell you...") but settled into it. It's a good story and to me writing style is secondary when reading an autobiography. I have always had the impression that Ava was a man-eating femme fatale but this book cast her in a much more human and humble light. I did get the impression that she softened some stories or left some out entirely. I was touched by what she did reveal - her humble beginnings, painful shyness, lack of self esteem, and her deep love for Frank Sinatra. All in all, this story contained all the elations and tragedies you'd find in anyone's lifetime. It's a great read and I'd recommend it to anyone who would like to learn more about this beautiful star.

Published by Thriftbooks.com User , 18 years ago
In addition to demonstrating a self-deprecating wit and a candor that is often surprising, even in an autobiography, in this memoir Ava Gardner conveys a warmth and genuineness that makes her (in my opinion) an instantly likable narrator. Then, the fact that the events of her life would have given enough material to make a great story even if she herself wasn't such an engaging storyteller. This book is tempered with irony. Ava's reflections on some of her greatest times are presented through a veil of bittersweet nostalgia. That her life was a sad one is evident; she details three failed marriages to some of the era's more notable celebrities/womanizers and her constant sense that her career path was accidental, and her eventual phase as recluse and expatriate. These events told from the perspective of an aging woman - one who seems to have been truly convinced that her fading (?) beauty is her only marketable asset create an exquisitely tragic heroine. Consistently smart and irreverent, Ava balances this obvious sadness and feeling of being misplaced with a stoic insistence that she's had "a hell of a good time." In all, her willingness to poke fun at herself and her open examinions of her personal weaknesses provide a refreshing counterpoint to the usual self-aggrandizement of the Hollywood auto-biography. I strongly recommend the book, if not for pure entertainment, for a compelling portrait devoid of literary pretensions.

Published by Thriftbooks.com User , 21 years ago
Worth reading for her version of a life full of events that many others have previously chronicled. Written it seems to set the record straight, one is still left wondering when comparing her version to others whether she remembers it a little differently from the way it happened. One notable variation lies in the Howard Hughes connection. She stedfastly refuses to admit that there was any sexual relationship at all where her biographers previously have assumed that there was. In putting together other impressions about Mr. Hughes and in evaluationg her book, I would personally believe her. I believe that she finished all she had planned to say before she died, but I'm not sure of that, if seems that she never saw the final printing of the book. I would also wonder if the book was almost completely composed by others instead of her having any direct role in it because, at times it seems that there is too much of an effort made by the narrative to "sound like she would sound" but, of course, she gave it her complete blessing and it belongs to her estate, so I am not sure that it makes a material difference, but one would hope that the book is her own words as captured on tape. Especially if you like old Hollywood an or if you are curious about what the wealth and fame syndrome seems to entail and or if you just are fascinated by her entire generation a la Tom Brokaw, you'll find it quite worthwhile.

An Great Story from and Interesting Woman

Published by Thriftbooks.com User , 21 years ago
This was a wonderful book, which kept me engrossed until I finished it in 2 days. Ava tells a wonderful entertaining version of her life, warts and all. Afterwards, I rented as many movies as I could in which she starred. The book was well written, and the story of her life and loves interesting.If you enjoy biographies, this is definately one to select.
Copyright © 2020 Thriftbooks.com Terms of Use | Privacy Policy | Do Not Sell My Personal Information | Accessibility Statement
ThriftBooks® and the ThriftBooks® logo are registered trademarks of Thrift Books Global, LLC