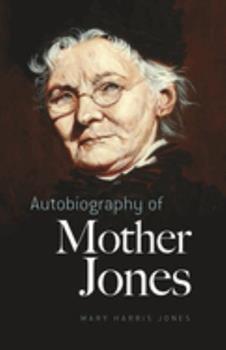 Among the most stirring pieces of labor history ever written, this autobiography chronicles the life of a woman who was considered a saint by many, and by others as "the most dangerous woman in America." Widowed at the age of 30, Jones spoke tirelessly for the rights of workers and unionists.

Published by Thriftbooks.com User , 12 years ago
This was a short book for a woman who had so much life to tell about. Only 3 pages are devoted to her early years. She doesn't even mention her husband's name. She has a sentence or two about her dad, Richard Harris. Her life, in her opinion, was clearly as a union activist. The book is a compilation of all the strikes she was active in. She was undoubtedly a daring and brave woman. Most interesting is how she managed to organize the women and children of the workers in such unique and adventuresome ways. She lived through a time when America was horrid for working people. She was a bright light for this country along with many other courageous and persecuted labor reformer types. Thus far in my research of the Labor Movement of the United States, she is only the second to mention Governor Hunt of Arizona and his unique methods for dealing with labor strikes in his state. Philip Foner was the other. Foner gives more detail of the Governor and the strike. Mother Jones is another "bigger than life character" in American history. This book is a quick read for anyone interested in past labor problems in America but it gives more insight into the labor movement and certain strikes and others involved than into the life of Mother Jones. Books written by Richard Noble - The Hobo Philosopher: "Hobo-ing America: A Workingman's Tour of the U.S.A.." "A Summer with Charlie" Salisbury Beach, Lawrence YMCA "A Little Something: Poetry and Prose "Honor Thy Father and Thy Mother" Novel - Lawrence, Ma. "The Eastpointer" Selections from award winning column. "Noble Notes on Famous Folks" Humor - satire - and facts.

Published by Thriftbooks.com User , 12 years ago
One hundred years ago, Mother Jones was called in Congress "the most dangerous woman in America". We can thank her for America's child labor laws and worker protections like weekends, less than 12 hour work days and the right to organize. Mother Jones, an immigrant from Ireland, became a labor organizer when she was 50 in the coal fields and factories across America. She didn't stop to write this book until her 80s. It covers many of her campaigns and arrests, including her Childrens' Crusade. She was known to be plain spoken and that is how she tells her remarkable story of walking into strike areas where coal miners were being murdered in cold blood by militias hired by the "bosses." Wearing a black Victorian gown and a black hat, she often walked 8 - 10 miles to talk for hours to miners and their families. She met with them in fields and forests when company owned buildings were denied for meetings. She was arrested many times, threatened by armed thugs and law enforcement. She was recognized wherever she went and was the only hope for starving coal families. She wouldn't back down and she wouldn't shut up in her fight for justice. She loved the Constitution and her working "boys" and families. Mother Jones can give hope to anyone who feels powerless in America because her story shows how a person who has lost everything can make such a big difference in the lives of many people. And she did it most of it before women had the vote. You can feel Mother Jones' grit, courage and love in this book.

Published by Thriftbooks.com User , 13 years ago
Mother Jones was powerful and heart wrenching and an extremely important woman and story.

Published by Thriftbooks.com User , 21 years ago
A very imformative book about one of the greatest women in history. I am not usually a fan of history, or autobiographies but this is a clear exception. The story of Mother Jones has become an american folk legend and has been twisted and altered by all sides. So the time comes to get it straight from the source. Mother Jones tells her own story in a straight forward, yet moving manner. My favorite part is a particularly heart-wrenching chapter on child labor. Where Mother Jones works in the mills along side young children haggard and overworked at age where nowadays they would barley be in school. The book is composed of numerous unique stories divided neatly into chapters which makes for easy reading, but it is very difficult to just stop at the end of a chapter. You'll find yourself making excuses simply to continue reading this wonderful and motivating tale from the one and only, Mother Jones.
Trustpilot
Copyright © 2022 Thriftbooks.com Terms of Use | Privacy Policy | Do Not Sell My Personal Information | Accessibility Statement
ThriftBooks® and the ThriftBooks® logo are registered trademarks of Thrift Books Global, LLC