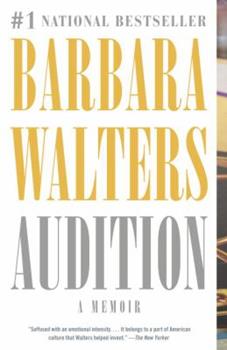 #1 NATIONAL BESTSELLER The most important woman in the history of television journalism gives us her inspiring and riveting memoir. After more than fifty years of interviewing heads of state, world leaders, movie stars, criminals, murderers, inspirational figures, and celebrities of all kinds, Barbara Walters has turned her gift for examination onto herself to reveal the forces that shaped her extraordinary life. Barbara Walters's perception of the...

Conversion of a non-fan

Published by Thriftbooks.com User , 14 years ago
I've never been particularly fond of BW's interviewing style and I used to cringe at some of her seemingly "odd soft-ball" questions. Why, I thought, is she asking goof ball questions to high ranking political figures--it seemed like a set back for women trying to make it in a man's world. Reading her aptly titled book, I now feel that I understand BW much better and like her much more--she's actually human, not an android! I've read a lot of the critical reviews and feel that maybe readers approached the book with a pre-determined decision. I myself would never have purchased the book, especially in hard cover, until I saw clips from some of her interviews about it. I realized that maybe the cloak had been dropped and BW was ready to really let the viewers see her with all her warts intact. And, that she did, in spades! Maybe even a bit too much. But, if it was to be an honest autobiography, I believe she had to tell it all or stay home. Some think she should have taken some of her secrets to the grave and that she hurt people by what she wrote. Certainly it doesn't make it right just because its true, but I rather doubt that anyone is suffering from what happened to her decades ago, except maybe BW. So, though it went to places that may seem too personal, I appreciated the candor. Why write only the good stuff when life isn't like that. She maligned herself as well. Did we want more contrition for her obvious bad choices (marital affairs, etc.)? Maybe, but if one believes in Kismet, then she will answer for her choices. I now see BW as a very insecure woman (at least through much of her journalistic career) who never felt quite good enough, even though she was systematically moving ahead in a "man's world." BW endured a lot of sh__ from some of her pompous male co-workers in a time when a lot of women would have packed their purse and gone home. She didn't. She stayed, fought for her rightful place, even when the stakes were great, and took home the prize. This book humanizes a woman that many have never known. Is it honest? Certainly. From BW's standpoint, she's letting it all hang out. Does she go too far, name too many names? Well, maybe so, but, let's be honest, that's what some of us were looking for, the unvarnished view of her life as she saw it. Maybe others would disagree with her characterizations and if they were part of the picture, they have that right. However, the general audience really shouldn't pass that judgment, since we weren't there and don't know. But, because BW was willing to shine the light (an unflattering one) on herself as well as her colleagues and lovers, I felt that maybe this was her attempt to reveal her humanity, which she had so carefully hidden behind cameras and questions for so long. BW obviously did some questionable things, such as having an affair with a married black Congressman. Did she do it for love or for her own career? Well, only she knows, but I tend to believe h

A Classy Honest but Painful "Coming to Grips with Life"

Published by Thriftbooks.com User , 14 years ago
Befitting the classy lady that she is, Mrs. Walters has penned an extremely honest, revealing and often painful summary of an interesting and fulfilling life. Not being able to drive, cook, or athletic in any way, including being unable to even ride a horse, makes Barbara seem almost normal: Her humanity comes through in so many ways that she now feels like a member of the family, the family of humanity: and not the calculating, hyper-testosterone, driven pseudo-masculine "ball-busting" "kill-or-be-killed witch" persona that she is often accused of projecting. If having to care for her entire family after her father's "ups and downs," and then finally "down and out" business life was not enough, then her relationship with her "less than normal sister," troubles with her adopted daughter, her social isolation, and her struggles against a male dominated world, brings her humanity clearly into focus in a way that no other aspects of her life ever could have done. After reading so much pabulum masquerading as autobiography (Hilary Clinton's "Living History" for instance), it is refreshing to read one that actually reveals a life actually lived and one, worth living. Five Stars

Published by Thriftbooks.com User , 14 years ago
Barbara Walters doesn't sugar coat her life. Good for her! If you're going to tell your life story you need to tell the good, bad, and the ugly. And she does just that. I have even more respect for the woman now. She admits her mistakes in her affair and her broken marriages. She also admits the guilt she feels for her relationship with her disabled sister. The book was a little longwinded but an interesting read about an interesting and influential woman.

An Extraordinary Life and Book

Published by Thriftbooks.com User , 14 years ago
At nine o'clock this morning, I arrived at Barnes and Noble, picked up Audition and sat down to read with a cup of coffee. I read for hours, bought the book and continued reading at home. At over 600 pages, this book cannot be read in a day. However, I have read enough to report that the book is magnificent; extremely well- written, very pleasurable to read and absolutely fascinating. Thankfully, there is also a detailed index. I found myself eying the index and flipping through to certain sections. I enjoyed reading about Walters' experience with the application form and other details at my alma mater, Sarah Lawrence College. Open this book and on the inside jacket is a listing of the hundreds (thousands?) of people who Barbara Walters has interviewed and knows. It's pretty staggering, actually. Born September 25, 1929, Barbara Walters has led an extraordinary life. Walters was first known as a TV morning news anchor and became the first female evening news anchor and many of us know her as the interviewer who can make anyone cry. Walters has spent decades reporting the news and interviewing, extracting juicy details and information out of world leaders, celebrities, heads of state and other VIP's. In Audition, we get to learn about Walter's personal and professional life and her relationships with many of the most famous people in the world. In the prologue, Walters states: "It feels to me that my life has been one long audition--an attempt to make a difference and to be accepted." I was quite moved by her introduction and her feelings about her mentally challenged older sister, Jackie. Walters credits her sister as being the strongest influence in her life and credits her for teaching Walters about compassion and understanding--the traits that have made her such an outstanding interviewer. "I've guarded my sister's privacy for years." Walters writes. "And although she was the central force in my life, she was part of the package that I'm about to unwrap on these pages." Walter's warmth and compassion comes through in this book and you come to care very deeply about her. She writes in a conversational tone and the book is very enjoyable to read. One statement Walters makes I found strange, however; she writes: "I was then, and still am, attracted to men who are smart and powerful. I'm not sure why. I think it's because I'd always hoped there would be a strong, successful man to take care of me so I wouldn't have to take care of myself." Really? Or is it simply that like seeks like--why would Walters seek a stupid and weak partner? In spite of that statement, I see hope and inspiration in this book especially for young women and girls, because it shows that a woman can be highly intelligent, tough and successful and still be a woman. From the author of the award winning book, Harmonious Environment: Beautify, Detoxify and Energize Your Life, Your Home and Your Planet.

Published by Thriftbooks.com User , 14 years ago
Having read the book, I had to hear this version in her voice. Unfortunately, it is abridged. Neveretheless, Walters hits many of the high points here and hearing it read with her unique inflections and accents was worth it. She talks about her troubled family. Her parents had a difficult marriage. Her dad was in show biz, first in running vaudeville then in nightclubs. He was mostly absent and went from wealth to poverty over and over. Very stressful for Barbara and her mom. Plus, her sister was intellectually challenged and that was tough for the whole family. Ironically, when TV came into existence it became her sister's boon companion. Highlights: Walters describing her ascent at the TODAY SHOW as she shattered barriers and rose to the top. Her descriptions of interviews with people like Yasser Arafat and Fidel Castro are priceless. Absolute fave from the audiobook version: Walters reaction to Gilda Radner's parody of her on Saturday Night Live. Walters was mortified and embarrassed but she got over it and she even does a funny imitation of Radner as BABA WAWA. Walters doing a parody of a parody of herself. Priceless! Note*some of the juiciest stuff from the book is NOT on the audio version. Pay heed.
Trustpilot
Copyright © 2022 Thriftbooks.com Terms of Use | Privacy Policy | Do Not Sell My Personal Information | Accessibility Statement
ThriftBooks® and the ThriftBooks® logo are registered trademarks of Thrift Books Global, LLC