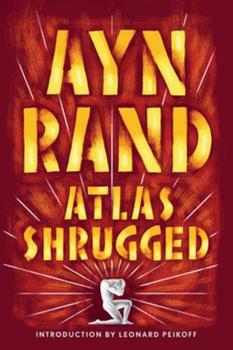 Peopled by larger-than-life heroes and villains, charged with towering questions of good and evil, Atlas Shrugged is Ayn Rand's magnum opus: a philosophical revolution told in the form of an action thriller--n ominated as one of America's best-loved novels by PBS's The Great American Read . Who is John Galt? When he says that he will stop the motor of the world, is he a destroyer or a liberator? Why does he have to fight his battles not against his...

Published by gmilton , 2 days ago
Received my order for Atlas Shrugged. Was supposed to be very good copy. Copy was ready for the trash. Worst item I have ever received. Very disappointed in it. gmilton

Published by Serenity , 6 months ago
so I received my copy and it arrived with no dust cover, ive ordered over 20 books from this site and never received a book not pictured. this wasnt very good quality its missing a whole cover! otherwise the actually good book with great morals and something to learn from. definitely recommend but wtf with the no cover. i imagine as advertised not a blank book man!

Published by J.s12 , 6 months ago
This book challenges the way many people think in today's society, which tends to upset people. Keep that in mind when reading the 1 star reviews. They're simply scared of thinking critically about their own misplaced views.

A thousand years from now, people will still be reading this book.

Published by Peter Finn , 1 year ago
I went into this book with fairly low expectations. As a former socialist, I had come to think of Ayn Rand as an advocate for a sort of boogeyman version of selfishness. I had personally known people who had taken to her philosophy of objectivism and become selfish in a bad way, that is, engaging in one-sided value propositions where my only objective is for me to win regardless of whether you lose, no matter how little it is I'm winning, or how much you are losing, and the only thing that makes the transaction moral is that I am pursuing my self interest, because your interest is of no consequence to me. That is not what this book advocates, but I can see how a high school version of myself could come away with that miss-understanding. Instead, this book lays out a fairly concise moral framework based on the following idea: You shall not expect value from another man unless you give him something of value in return (and vice versa). You will note that this is similar to "do unto others as you would have them do unto you" but it is subtly different in that it addresses the elephant in the room, which is that people all too often utilize apparently "selfless" moral frameworks, including Christianity, to impose demands on others, rather than managing their expectations for themselves. Ayn Rand's mission is to refute that abuse of morality by unscrupulous people whom she dubs "looters" precisely because they expect value from others without creating value themselves, and replace it with one where achieving prosperity by creating value is both your aim and your responsibility in life. She performs this refutation so flawlessly that I suspect any person trying to operate on such a corrupted moral framework would likely have it exorcised from their mind and spirit. That's a nice segue into why you've been told that this book is bad juju by your well meaning progressive friends. There are quite a few ideologies out there which do exactly what Ayn Rand is refuting. Progressivism, socialism, communism, and various other flavors of Marxism are all founded on precisely this idea that those who succeed owe something to those who don't, and that this is a moral debt of the strong to the weak, the successful to the unsuccessful, the productive to the unproductive, etc. If you read this book, such ideologies will not only cease to resonate with you; you will find them disgusting. That is absolutely terrifying to your well meaning progressive friends because there is no great work equivalent to that of Atlas Shrugged of which I am aware which they can use as a counter, so instead they feel their only hope is to stop you from reading it lest you become what they see as brainwashed (immune to their ideology). On top of all this, it is also a great story. The heroes are proper heroes, and the villains are proper villains. The plot is engaging. The pacing has a nice ebb and flow like the waves of the ocean, so even though the book is 1,084 pages, you don't feel like you're spending 900 of them leading up to the main event. Instead, there are multiple major peaks and troughs, you and find yourself eagerly awaiting the next one and looking forward to the dramatic conclusion at the end. There are a great many other ideas discussed in the book, including some that are prescient to the Chinese coronavirus crisis, but I will let you discover those for yourself. I will just add that I am not a light reader and this book was still long for me, but it is worth it. It is the best novel I have ever read, and in terms of the ideas it presents, it is in the top three most impactful books I've read as well. I put this on par with the greatest writings of any classic novelist (think Dostoevsky), and expect that a thousand years from now, people will still be reading this book.

This will change your entire worldview

Published by Bri Colleen , 3 years ago
This woman was a genius. I love this book!

This book made an impact on me!

Published by Thriftbooks.com User , 12 years ago
In case this is your first encounter with this book, It is a fresh story but a continuation to Ayn Rand's philosophy that started out with books like "We the living" where she new something was wrong but could not put her finger on it. She progressed to books as "The Fountainhead" where she could describe the problem quite well. Now in "Atlas Shrugged she has come up with a plausible answer to the problem. In essence your head can work without your hands yet your hands can not work without your head. The story is not unique but it still holds you attention. The world is becoming more socialized and it is harder for individuals to make an impact without having a multitude of parasites on their back. Some chose to fight, others chose to ignore; some do not have a clue as to what is happening. The world seems to be gearing down is just coincidence or is there some one taking a hand in it. "Who is John Galt?" I can tell you of my experience with the book. I must have been a late bloomer or just unlucky, because I did not come across "Atlas shrugged" until I was 20 years old. I was in the military and needed some reading material. My younger sister sent me the book. It looks just a little thick to me but I started reading, and reading and reading. I do not know if it was the story or the clarity of thought. Now I saw everything in a new or different light. It felt weird to see the newspapers and politics paralleling the book. I was in New York (West Point) at the time and three things stood out to this day. This was a public service announcement on the TV "The law says that an apartment owner can not charge more than 30% of what you make" and at the same time the apartment buildings were closing down. The postal carriers went on strike and the military had to deliver the mail. That winter the snowplow drivers went on strike. When the strike was over the snowplows were missing. They found them the next summer in an empty lot. There is nothing quite as convincing as watching the world and book parallel each other. I have mellowed out some lately. However, I really think that this book should be read by high school age where it would have maximum impact of one's train of thought. The Fountainhead

Published by Thriftbooks.com User , 22 years ago
How do you take such heady subjects as Objectivism, rational thought and the virtues of selfishness, to an audience accustomed to the white washed, banal pablum of 1950's America? By simplification and reiteration. Atlas Shrugged is long, has some very simple, one dimensional characters, and repeats its themes often. But, it had to. It is a subtle introduction of a decidedly humanistic, secular philosophy to a puritanical, non-secular society . As many have said before, you will love it or hate it. If you subscribe to strict religious dogma and dismiss your mind as impotent and unable to "know" anything, then you will hate it. If Plato's parable of the cave is the world you live in, you will hate it. If you despise Bill Gates for his Billions; if you believe the government owes you better health care (or anything for that matter, other than a rebate on your taxes), then you will hate it. If you are excited by success (anyone's), believe in your mind and its abilities to think rationally, and laugh at new age channelers, witch doctors, snake handlers, or any other mystic who believes "A" is "non-A", then the chances are you will love it. Read it and find out who you are.

The most thought-provoking book I've read.

Published by Thriftbooks.com User , 22 years ago
Ayn Rand's message is not subtle and she does not mince words, yet the novel is elegantly written with a passion and idealism that would seem stilted if there were not so much substance to those words. What is the meaning of life? Who do you live for? Who SHOULD you live for? Why? These are the questions that Rand attempts to answer (for whom is your choice), using (1) heavy-handed but logical arguments, and (2) the wonderfully flawed, yet perfectly human characters who encounter problems and dilemmas very similar (too similar?) to those found today. Reason, morality, and integrity are the true heroes of this novel, no faith required, no religion necessary. In a society where relativism and mysticism are unconsciously accepted tenets of so many people values, this novel provides and ARGUES (a lost art these days ...but I digress) another point of view. For those (such as myself) religiously inclined, Rand comes even more highly recommended, for I have found that reason and faith are not mutually exclusive concepts, and reconciling the two has led me at least to a more complete philosophy of life, where morality is guided by my own reason and principles, not by faith or the opinions of others. Perhaps this book will start you down the same road and the journey for you will be similarly rewarding.And if for no other reason, read it so you understand greedy capitalists :)

Atlas Shrugged Mentions in Our Blog