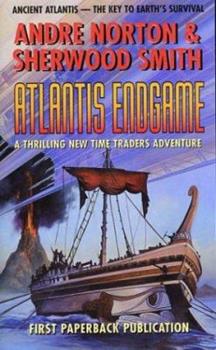 by Andre Norton and Sherwood Smith

We receive 14 copies every 6 months.

Andre Norton and Sherwood Smith have collaborated on Solar Queen and Time Traders novels, but never before have they created as rousing an adventure as awaits Ross Murdock, Gordon Ashe, and the rest of the Time Patrol in Ancient Atlantis. In Earth's future, when time travel has become possible, the Time Patrol is the top secret government agency that protects Earth's past, so that our history will not become corrupted by invaders from either our future...

Published by Thriftbooks.com User , 18 years ago
Atlantis Endgame is the seventh novel in the Time Traders series, following Echoes in Time. It tells the further adventures of Ross Murdock, his wife, Eveleen Riordan, and his partner, Gordon Ashe. It also adds a new character, Linnea Edel, an old acquaintance of Gordon.In this story, Linnea has found an anachronistic earring with a modern jeweler's mark in a site on Thera, the probable location of legendary ancient Atlantis. While interesting in and of itself, it becomes extremely intriguing when found to be identical to an earring belonging to Eveleen. This existence of this object in ancient layers of soil suggests that it was lost circa 1628 BC, shortly before the island was destroyed by an huge volcanic eruption. The Project suspects Baldie intervention in the eruption and intends to send a team back in time to investigate.The Russian time travel group cooperates with the Project to send a small ship with six agents aboard back to Kalliste, the ancient name of Thera before the eruption. There they travel to Akrotiri, the major town on the island, where they discover signs of Baldie tech in the volcano vents both on land and in the sea. Later a group of Baldies are seen on the beach, apparently looking for indications of THEM. They also find a Baldie ship in the sea, but can't locate the Baldie onshore base. They do find a couple of Fur Faces, a alien sentient species encountered only once before; however, they do not seem to be allies of the Baldies.The natives are anxiously awaiting word from their oracle, but nothing new has been spoken in the past few months. Some Kallistans have left the island anyway, terrified by the frequent earthquakes and the steam, smoke, ash and rock ejected by the volcano. Linnea claims to be an Egyptian Earth-Goddess priestess to infiltrate the Oracle's household and is there when the seer orders the evacuation of the island.This novel is driven by the imminent threat of eruption, so is more like a hit and run than the almost leisurely exploration in the other tales in this series. The team are all disappointed by the lack of opportunity to study this almost unknown culture, but Linnea, the newcomer, is particularly frustrated by the time limit.Recommended for all Norton fans and anyone who enjoys tales of ancient societies in a SF setting.

Published by Thriftbooks.com User , 18 years ago
This book is an exicting story which moves at a brisk pace. But it is part of a series, and in this book the principle heavies are revised to be ecologists. It does not fir the earlier portrayals of the baldies at all!In the first two books of the series the baldies were the (ruthless) dominant race of an interstellar empire. The revision of their charactor and motives does not fit the earlier books in the series. That was a very jarring element to me.Even so, the book was an excellent read.

Published by Thriftbooks.com User , 18 years ago
When archeologists discover a modern earing burried beneath tons of lava, they see an anomoly. Scientists at the time project see something different. A possible attempt by aliens to redirect human history, destroying the modern world. A small team of project agents are sent back to the ancient Greece of Minoan civilization--and Atlantis itself--to ensure that humanity's destiny is not subverted. Before the ancient civilization of Kalliste was destroyed in a huge volcanic explosion, it had achieved technological levels not seen again until modern times. Clearly the world would have been transformed had it survived--but would the transformation have been for the better? Authors Andre Norton and Sherwood Smith add a degree of ethical complexity to a science fiction adventure. The project agents think that they are doing the right thing, but so do the two separate groups of aliens that they face. The Time Traders series formed a part of many baby boomers introduction to science fiction and still holds power today. Norton and Smith's decision to add ethical complexity to the adventure gives strength to ATLANTIS ENDGAME. Young adult readers will find Norton and Smith's style to be approachable while more mature readers will find a deceptive intellectual subtlty. Emotional depths, however, are only hinted at.

Published by Thriftbooks.com User , 18 years ago
At a dig on the Mediterranean island of Thera, archeologist Linnea Edel finds a modern day earring buried amidst the ruins of artifacts from 1600 BC. Not knowing how the jewelry could be among these ruins, Linnea shows her anachronistic finding to her old friend Dr. Gordon Ashe, who is stunned by what she shows him.Gordon shows the earring to his Time Patrol associates. Each reacts similarly that someone, probably the alien "Baldies," went back in time and disrupted the continuum. The team knows they must travel to Ancient Greece to Plato's Atlantis to ascertain whether the aliens are changing history by destroying a key link in the advancement of technology.ATLANTIS ENDGAME is an exciting action adventure tale that never slows down for even a nanosecond. Andre Norton and Sherwood Smith cleverly use Atlantis as the latest base of operations of the Baldies that forces the chronology patrol squad to try to correct a seemingly minor anachronism that could snowball into the end of technology before it can begin on Planet Earth. Fans of the Time Traders series adventure (see ECHOES IN TIME) will want to travel along with Andre Norton and Sherwood Smith on this delightful trek in time.Harriet Klausner
Copyright © 2020 Thriftbooks.com Terms of Use | Privacy Policy | Do Not Sell My Personal Information | Accessibility Statement
ThriftBooks® and the ThriftBooks® logo are registered trademarks of Thrift Books Global, LLC