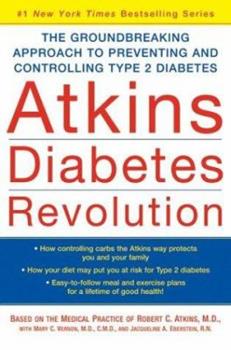 More than a program for living with diabetes, here is a groundbreaking approach to preventing, treating, and even reversing an American epidemic, based on the science of the doctor who invented the low-carb lifestyle and wrote the #1 New York Times bestseller Dr. Atkins' New Diet Revolution featuring the Atkins Nutritional Approach(tm)-- a celebrity-favorite diet perfect for losing weight before your wedding or to bounce back into shape post-baby,...

Published by Thriftbooks.com User , 14 years ago
My husband has had type two diabetes for 15 years. He also had irritable bowel syndrome and was tired all the time . After starting this diet he has cut his insulin in half, lost 25 pounds and the IBS disappeared!! I used to think Atkins was crazy but now I'm a believer!!

Published by Thriftbooks.com User , 14 years ago
Six weeks ago I was in the hospital. I never knew I was a diabetic and was juicing to lose weight and lower my blood pressure. Over a period of time my sugar had climbed to over 850, I had a DKA seizure and was rushed to the hospital in an ambulance. I was told that I am very lucky to be alive. They put me on 30 units of insulin a day and told me I would need this the rest of my life. Following the guidance in this book my sugar is now consistently 100, my blood pressure is coming down dramatically and I feel better and have more energy than I have in years. Have also lost 15 pounds. When you look at the progression of diabetes in our society today and its exponential growth this book should be required reading in our high schools. By the way, I no longer need insulin and able to maintain my sugar level at 100 using the principles in this book. It can save your life.

An Eye-Opener on Blood Sugar Disorders

Published by Thriftbooks.com User , 15 years ago
The conventional test for diabetes in a doctor's office involves a blood-sugar level test after a fast of 12 or so hours. Atkins believes that this is inadequate. According to him, by the time a doctor's blood test shows elevated blood sugar following a 12-hour fast, and one is thereby labeled clinically diabetic (Type II diabetes), the blood sugar disorder is already well advanced. Atkins believes that blood sugar disorders are much more prevalent in the population than is commonly realized. In fact, Atkins asserts that he has never met anyone who was overweight that did not have some degree of blood sugar disorder, if only manifested by increased insulin resistance. Atkins believes that the blood-sugar levels should be checked repeatedly after a meal, not just once after 8-12 hours. Using his words, what is needed is not a snapshot but a movie of the sugar metabolism. The normal curve for blood sugar is supposed to be as follows: A postprandial rise for about an hour or two (not too high at its peak) followed by a gradual decline, and one that does not need a great deal of insulin released to cause this decline. The first symptom of a blood sugar disorder is a normal blood-sugar curve that nevertheless requires excessive amounts of insulin to bring the blood sugar under control (hyperinsulism). For this reason, Atkins believes that measuring blood sugar alone is never enough. The insulin levels must also be measured. If the blood sugar goes too high one hour after eating, this also indicates a blood sugar disorder--even if the level after 8-12 hours is normal. If Atkins is even half-right, then doctors are missing a lot. And Atkins believes that the solution to Type II diabetes is the reversal of insulin resistance, not the supplementation of additional insulin. Paradoxically, insulin supplements can make weight loss more difficult. The Atkins Nutritional Approach has commonly been misrepresented as one where virtually all carbs are cut out. This is patently untrue. Atkins recommends the retention of natural, low-glycemic carbs, especially those which coexist with valuable nutrients, as is the case with many fruits and vegetables (for example, strawberries). Atkins mentions that, apart from weight loss, the elimination of empty carbs from the diet can bring such benefits as renewed taste of sweet things and a major drop in blood triglycerides. From personal experience, I can say "Amen!" to that.

Atkins' colleagues carry on his work

Published by Thriftbooks.com User , 17 years ago
I am still in the process of plowing through this book. Some may find that there is not much new in it. I think it's a great resource for the Atkins way of life in general. I am a newly-diagnosed type II diabetic. There is far more information in this book than I was able to get from the doctor who diagnosed me. As a matter of fact, that doctor originally suggested that I go on *Slim-Fast* to lose weight--I about fell off my chair. Most doctors are still mired in the anti-fat, anti-cholesterol hysteria and myths. The Atkins approach is a breath of fresh air, since it dispels these myths. So far, from what I have read, I would recommend this book in combination with Dr. Bernstein's Diabetes Solution (which seems to offer more practical day-to-day advice regarding the details of managing diabetes) as your standard diabetes references. Unfortunately, few doctors out there are managing diabetes with the low-carbohydrate approach. The guy who diagnosed me immediately wanted to put me on four or five medications, and he actually vowed to talk me into taking a statin drug, even though he acknowledged that that would only mask the symptoms and not get to the underlying cause. Some people may not like eating low-carb, particularly with its heavy emphasis on animal protein foods. However, for those like me, who like being carnivorous or omnivorous, you may like being vindicated in your liking to eat meat.

FINALLY SOME CREDIBLE HELP FOR DIABETICS

Published by Thriftbooks.com User , 17 years ago
As someone with Type 2 Diabetes, I have lots of experience with diet claims. This book nails down the reasons they have all failed - they were carb based. Counter-intuitive in many ways, this book patiently explains how the carbs get processed into fat and why low fat diets fail time after time.My knowledge of the Atkins approach was based on the often exaggerated claims made by both its supporters and detractors. When this book appeared, I decided to make my own analysis.I was thrilled to discover that this is not a diet book, but rather a guide to the Atkins Blood Sugar Control Program (ABSCP for short). With weight loss can come reduced dependency on drugs, less risk of complications, and a healthier, happier life.The book itself is divided into several sections. The core is a very well researched and documented 330 page overview of the state of diabetes research and how it applies to diabetics and those at risk for diabetes.There are 70 pages of meal plans, 37 pages of recipes (and a weblink for more), plus appendices on research documentation, induction foods, and various other helps to the reader.Because of the care with which this volume was put together, I found that many of the things I had been hearing about Atkins were just plain wrong. Authors Vernon and Eberstein are very clear that 4 ounces of cheese a day are the max; that eating foods with trans fatty acids is bad; and that the ABSCP is not an excuse to have a half dozen pork chops in one sitting. The allowed foods are also pretty tolerable for the fussy among us. I was able to put together meal plans that are easy to prepare and tasty. This is a good and helpful book, and I only wish I had been able to get as much knowledge about how diabetes works from the doctors who have treated me. Even the famed Joslin clinic never explained that my soaring trigycerides were the result of eating too many carbs on a low fat diet. Caveat emptor.
Copyright © 2022 Thriftbooks.com Terms of Use | Privacy Policy | Do Not Sell My Personal Information | Accessibility Statement
ThriftBooks® and the ThriftBooks® logo are registered trademarks of Thrift Books Global, LLC