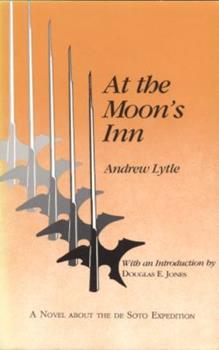 At the Moon's Inn

At the Moon's Inn , first published in 1941, provides a fictional account of De Soto's famous Spanish expedition to La Florida and through the southeastern United States between 1539 and 1543. The novel begins in Spain in 1538, where De Soto and his chief lieutenants, veterans of the campaigns in South America, pledge themselves to a new enterprise to explore and exploit La Florida . The narrative follows them on their voyage to Cuba, where they rest...

Lost in the Wilderness

Published by Thriftbooks.com User , 15 years ago
While Andrew Lytle is best known for his role with the Nashville Agrarians, he also was an excellent historical novelist. Some of his best works, such as the novel "At the Moon's Inn" and the novella "Alchemy", deal with Spain in the New World. While one would not think colonial Spain would be fertile ground for Lytle's Agrarian vision, his message comes through very clearly in this interesting, insightful and exciting novel. Lylte examines the ill fated and unproductive De Soto expedition which, in three years, discovered the Mississippi, ravaged the natives of the Southeast and found nothin in terms of treasure, found no colonies and made no converts to Christianity. In an excellent first scene, Lytle has heroes of the Reconquista and the legendary survivor da Vaca warn Soto and his men about what waits for them in La Florida. Lytle then takes the reader through the New World where the Spanish turn their backs on all the glories of Western Civilization and the moral foundations of the Christian faith in search of gold. This is refinforced by memories of Columbus and descriptions of him as an alchemist and a confession from a ghost at the end of the novel. Dreams of fortune can destroy men as they cut the ties of the past and wander in an unfamiliar wilderness. That is certainly a key aspect of Lytle's vision. The introduction is excellent on Soto and scholarship of that never conquered conquisidor. It is not as good on Lytle and M. E. Bradford's essay on "Alchemy" and "At the Moon's Inn" may be a better place to start. There is also one of the stangest blurbs I have ever seen on a book on the back cover of the Library of Alabama Classics paperback from, of all people, former Sen. Bob Graham of Florida praising Soto. It's fair to say ole Bob did not read the book. Lytle's book is devestating to Soto in this provactive and satisfying novel.
Trustpilot
Copyright © 2022 Thriftbooks.com Terms of Use | Privacy Policy | Do Not Sell or Share My Personal Information | Accessibility Statement
ThriftBooks® and the ThriftBooks® logo are registered trademarks of Thrift Books Global, LLC